The perks of being a wallflower door Stephen Chbosky 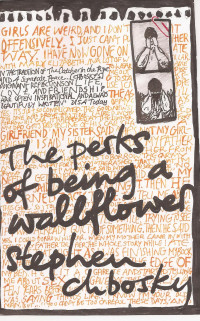 The perks of being a wallflower

Charlie is a boy from 15 years and he feels happy and unhappy at the same time. He lives with his father and mother and he also has a brother and a sister. In the spring his friend Michael commit suicide and Charlie don’t know why. He meet with student mentors but does not get answers to his questions.

He meets a boy named Patrick in his technical class and he decides to say hi to him. He saw him the second time at a football game. Patrick was with his step-sister Sam. Charlie felt in love with Sam but she said that he is too young for her and she suggests him to be just friends.

Charlie’s teacher Bill decide to give him extra lessons. He gave him books that he needs to read and write essays about it. He also gave him the assignment that he doesn’t need to think the whole time about everything. Charlie tries to do that and he hanged more out with Sam and Patrick. They took Charlie to a party and there he eats  for the first time space cake. At that party he spotted Patrick with a boy, Brad. Brad plays in the football team and he doesn’t want others to know that he is gay. So Charlie decides and promises to keep his mouth shut.

Sam gets a relation  with Craig and Charlie can handle that, as long as Sam is happy. By Sam and Patrick, Charlie become friends with Mary Elizabeth, Bob and Alice. They celebrate Christmas together and Charlie felt really good there.

It turns out that Mary Elizabeth has a crush on Charlie and she asks him on a date. Despite that Charlie is in love with Sam, he says yes. They went a few times out and they get a relation but Charlie actually don’t like her. She only talks about herself and she never asks him anything about him. When they play the game truth or dare, Charlie get the assignment to kiss the prettiest girl in the room. Mary Elizabeth is there also but Charlie decides to kiss Sam. Patrick told Charlie that he can better leave for a few time. Charlie becomes feeling very lonely and he started to smoke weed. He now realizes how it is to have friends.

Brad’s father caught his son with a boy and he becomes really angry. He hits Brad with his belt and Brad’s been a while from school. When he comes back he ignores Patrick, who wants to talk to him. When Brad called Patrick a fucking fagot there comes a fight where Charlie is also a part of because he stands up for Patrick. After that, Charlie is again welcome in the group of friends.

The schoolyear is almost over and that means that all of Charlie’s friends are going to leave school and they are going to the university. Sam and Craig broke up because Craig cheated on Sam. While Sam is leaving she tells Charlie that she likes him a lot so they kissed, but when she touches his genitals Charlie panicked. He is laid on the couch and he has a dream in which his aunt Helen also touches his genitals. Nevertheless he lets Sam out but later his parents find  him naked on the couch , watching a TV that is not on.

He ends up in a clinic and here comes surfaced that his aunt Helen previously sexually abused him.

Title : The perks of being a wallflower

What’s on the cover: Text of things that Charlie thinks about

The locations: in his house, outside, at school, at bobs party, no specific place or town mentioned in the book

What made you decide to read this particular book?: A friend of mine had already red this book and she told me that this is a nice book to read so that is when a decide to read it.

Time spend reading this book: I think that in total I read about 28 hours.

Charlie is the main character of this story. He is the one who writes letters so you read his thoughts . He is an intelligent but sometimes naive boy. He loves his family and friends but does not really participate in life so that he looks as if he is absent-minded. His teacher Bill also gives him the assignments to participate more in life. The reason why Charlie sometimes acts weird appears at the end of the story ; he was sexually abused by his aunt but tucked it away all this time.

Sam is the sister of Patrick and Charlie felt direct in love with her. She's a few years older than he, and indicates that a relationship between them isn’t possible because of the difference in age. Sam gets involved with Craig and Charlie sometimes can’t handle that. Sam and Craig broke up and Sam tells Charlie that she likes him. At the end of the story, Sam leaves town to study at a university.

Patrick is with Charlie in the technology class. They started talking and Patrick is the one that introduces Charlie to his friends. Patrick is gay and has a (secret) relationship with Brad . When they broke up Patrick becomes very sad and starts drinking heavily. In this period, he spends a lot of time with Charlie and even kisses him once. Charlie does not like this but nevertheless allows this since  it is his friend and he feels that he needs to be there for him.

Patrick called Charlie at a moment a wallflower (p.49). The title is about Charlie’s  life, the story describes his experiences.

At what point in your story did you wish you were one of the characters so that you could influence events?

When charlie’s aunt Helen went to buy a birthday present for Charlie, I wish I was Charlie so I could make sure that she didn’t get in the car. Then Charlie could ask her later why she sexually abused him.

Which of the characters would you like to meet and what would you want to discuss with him/her?

I would like to meet Charlie’s aunt Helen, then I would ask her why she sexually abused Charlie.

Yes! I really like this book, because it is a really great story and every time I was reading it I really could empathize with the story.

More interesting than I expected.