Before I die door Jenny Downham 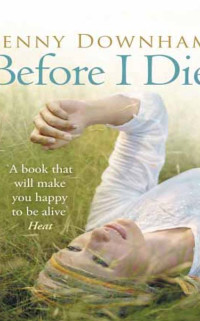 Motivation
I read this book mainly because I will be in a play about the story. After reading it I decided that I wanted to do an English book report about the book.
About the author
Jenny Downham is a British writer and ex-actress. She lives in London with her two sons. She played in Agatha Christie’s Poirot, Screen One, Basil and Safer. She stopped acting to focus on writing full-time. “Before I Die” is the first book she has written and got nominated for various awards.

Characters
Main character:
- Tessa (protagonist): Tessa is a sixteen year old girl, who is dying from leukemia (cancer). Since she has cancer, she has become very skinny. She’s like any other teenager, she wants to be independent, but because of her sickness that is hard for her. Tessa is a flat character; she stays the same kind of person throughout the whole story.
Other characters:
- Adam: Adam is Tessa’s neigbor. He is a sturdy young man that takes care of his mom. He likes to work in his yard and drive his motorcycle. Adam is a flat character.
- Cal: Cal is Tessa’s younger brother. He seems like he is a very intelligent boy, and he loves to do magic tricks. Cal is a flat character.

- Dad: Tessa’s dad takes care of Tessa. He makes sure that she always takes her pills, and that she has her check-ups at the hospital. Dad is a flat characer.
- Mom: Tessa’s mom has never really taken care of Tessa and doesn’t know much about her sickness. She is very sweet though. Mom is a round character; at the beginning of the story she doesn’t have much influence on her family. Later on she starts to notice that she has to be there for her family.

- Zoey: Zoey is Tessa’s only and best friend. She is Tessa’s friend because she was the only girl that didn’t treat Tesssa different when she found out she has cancer. She is a pretty girl that a lot of boys get attracted to. Zoey is a round character; She is a girl that is easy to get to, so she will have sex with every boy she meets. She regrets it later on during the story.
Narrative perspective
This book is written in a first-person narrative. Tessa tells us what happens and what she’s feeling. During the last couple of pages that is clearly recognizable; you read exactly what Tessa sees and hears.
Time span
The story starts when Tessa finds out that she has a couple of months left to live, and ends when she dies. This takes about three months.
Genre
This is a young adult novel, but it can also be seen as a psycological novel. This is because you get to see life in a different way. You learn that you’re not always that lucky, and that you shouldn’t take life for granted, because it might just be worse.
Motifs
- A list of 10 things Tessa wants to do before she dies.

Interpretation
Central theme
The themes of the book are love and death. I think that the author is mainly trying to tell the readers, that life doesn’t always goes the way you want it to and that you have to always keep that in mind and love your good life.
Explain the title
The title of the book is made very clear in the story. Tessa has a list of ten things she would like to do before she dies. Hence the title Before I Die.
Mood
This story has a somber mood. This is because you are reading about a girl that is dying. Even though Tessa is going through a hard time, she still has fun. That’s why I think the story also has a joyous mood.
Summary
Tessa just heard she’s not gonna make 17 and will only have a couple of months left to live. This is shocking news but Tessa tries to joke about it. She knew it. Since she hasn’t done all the things a normal person would do, she decides to make a list of ten things she wants to do before she dies. Together with her best friend, Zoey, Tessa makes sure she did everything on time.
She starts with number one; sex. Zoey takes Tessa to a club, and there they meet Scott and Jake. Tessa has sex with Jake; number one is done.
Second on her list is to say “yes” to everything. Tessa decides to take her brother Cal to town. Because Tessa has to say yes to everything, she ends up jumping in a canal. A waiter from a restaurant gets her out. In their taxi back home Tessa doesn’t feel too good, and when she opens her eyes again, she’s in the hospital. Suprisingly Tessa’s dad and mom are both in the hospital. Mom is usually not there, because Tessa’s parents are divorced.
Number three on Tessa’s list is drugs. Tessa meets her neighbor, Adam, and he tells her that she can take mushrooms. Later that week Adam invites Tessa and Zoey to take mushroom and takes them to the woods. As a reaction to the drugs Tessa tells Adam that she isn’t sick anymore and that she needs to stay in the woods.
Next on the list: commit as many crimes as possible. Tessa starts it off with some simple things like blaming someone else for something she did, or smoking in the bus. Zoey thinks Tessa should steal something. Tessa takes nailpolish and some other stuff, but she gets caught.
Tessa wants to learn how to drive a car, so that is the next point on her list. Tessa takes her dads car and drives Zoey to the hotel Tessa and her family used to stay when they were small. On that trip Zoey tells Tessa that she’s pregnant, and that Scott will be the dad.
Next Tessa wants fame. Her dad decides that he will take her to the radio station to talk about her sickness. Tessa doesn’t really want this kind of fame. She tells everyone how people treat her and about her list.
Number seven on Tessa’s list changed from travelling the world, to getting her parents back together. Tessa doesn’t have to try hard for this. Because of trips to the hospital, Tessa’s parents get closer and even sleep over by each other.
Next on the list is love. Tessa falls in love with Adam. On the night of their first date Tessa gets a noosbleed and gets rushed to the hospital with a taxi. In the hospital her nosebleed stops and Tessa can go home again. On their way back Tessa asks her mom why she left them, but mom couldn’t give her an answer. When Tessa looks outside the car she sees that her name is everywhere. While she was in the hospital Adam wrote her name on pretty much anything he could’ve written her name on. Now Tessa is famous, and all because of Adam.
Ninth on the list is that Adam comes to live with Tessa. Both Tessa’s dad and Adam don’t agree with it, so he sleeps over a lot. One night Adam holds Tessa’s hand and feels that she has a high fever. Again Tessa has to go to the hospital.
Finally Tessa wants to see Zoey’s child being born. This is just a couple of weeks away. Tessa is told that she won’t make 8 weeks. So she makes a list of how she wants thing to go when she dies. Unfortunately Tessa passes away just before Zoey’s child was born.