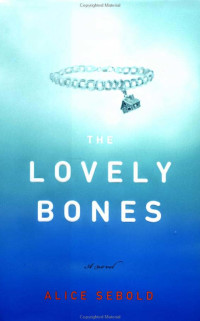 Story:
Susie Salmon is murdered when she is only 14 years old by a man who lives nearby (mr. Harvey). People in the neighbourhood have always thought him strange, but never suspected he would be a murderer. The book is about Susie, who is in heaven and looks down at Earth, at her family and friends, and at her murderer.

After her death, a lot happens. Her younger sister Lindsey was only 13 when it happened, and after Susie’s death she has to grow up really fast. When people look at her they think of Susie, and because she doesn’t want this she grows up so fast. Relatively soon after Susie’s death Lindsey starts dating Samuel Heckler, and they stay together in the entire book, at the end they get married too and they have a kid who they call Abigail Suzanne.

Susie’s father is devastated by his daughters death. He’ll do whatever it takes to find who ever it was who did this. He starts suspecting George Harvey pretty soon, but he has no evidence, so the police can’t do anything. Jack (the father) loses sight of everything else trying to catch Susie’s killer, this is what destroys his marriage. He still cares about his other children deeply, but he can never forget about Susie, and this bothers mainly Buckley sometimes (Susie’s younger brother).


Susie’s mom Abigail doesn’t cope very well with Susie’s death. And because she feels her husband is going too far in finding the killer, she starts feeling alone. About a year after the death she leaves Jack and has an affair with Len Fenerman, the detective who is investigating Susie’s death. But she doesn’t love him, he was just a way out of her marriage, and she leaves Pennsylvania and goes to live and work on a winery in California.

Buckley is Susie’s younger brother and he was only four when Susie got killed. He has a hard time growing up, because his mom left and his father is still grieving over Susie. Nevertheless, the relationship between his father and him is very good, but he always feel he’s second place. He tells his father this when he wants to use Susie’s clothes for something in the garden and his father freaks out (this is eight years after the killing). When his father takes the clothes away from him he says: “I’m tired of it, Keisha’s dad died and she’s ok!” .. “But what about us?” “Who?” “Us dad. Me and Lindsey, Mom left because she couldn’t take it.” [p 256/257]. In this part he expresses his anger and frustration towards his father. But then his father has a heart attack and he feels really guilty. He isn’t sure if Jack is going to survive, and he says: “Please don’t take him from me Susie, I need him.”

Grandma Lynn is Abigails mother, and she is a piece of work. A real lady, who cares about her appearance a lot. She never got along very well with her daughter, but after Susie’s death she is very good to have around, to keep everyone going. When Abigail leaves for California, she moves in with Jack and the kids, and they really start to love her.

Ray Singh is a boy who was in love with Susie Salmon (and she with him), but they never got to spend much time together. She follows him around after her death, and she still wants him very badly. If she could just kiss him one more time, she could accept her death better, she feels. She watches him grow up, and she watches him at med school.

Ruth is a girl who didn’t know Susie very well, but on the night when Susie was killed and her spirit went up to heaven, Susie’s spirit touched Ruth in the parking lot and Ruth felt this. Eight years later, when Ruth lives in New York, it turns out that Ruth has a paranormal gift, she feels the dead around her.

One afternoon Ruth and Ray, who became friends after Susie’s death, go back to their old homes, because a sinkhole nearby is going to be filled up. This is the sinkhole where Susie’s chopped up body was dumped, but nobody but mr. Harvey knows this. When they’re on their way back, Ray stops to pick some wild flowers for his mom, when mr. Harvey drives by in his car (by then, everyone knows he did it). On that moment, Ruth does something she’s been planning for a while. She makes her spirit leave her body, to temporarily switch places with Susie. So Susie’s back on earth for just one day or so, and she spends it with Ray. They kiss and he notices it isn’t Ruth he’s kissing, so she tells him she’s Susie. They make love and it all feels really good. Then Susie feels her spirit leaving again, and she and Ruth are in their rightful places again. I didn’t really like this part, because it was so out of the blue, and it was too unbelievable to me.

Samuel Heckler is Lindsey’s boyfriend/fiancé/husband, and his brother Hal Heckler plays a role in the book too. He hangs out with Buckley a lot, and he is kind of adopted into the Salmon-family. I never really got why, but he just was. (I thought he might have an affair with grandma Lynn, but that would have been grose so I’m glad it never happened).


Mr. Harvey moves away from his house when the police start to suspect him too. This happened when Lindsey broke into his home, and she found a sketch in his sketchbook. A sketch of the room he built under the cornfield where he raped and killed and chopped Susie Salmon up. This is prove enough for the police to at least arrest George Harvey, but they’re too late because Harvey has left and they can’t find him anymore.

The ending is quite beautiful. It has been eight years since Susie’s killing, when Jack has an heart attack. Lindsey and Samuel have just gotten back from their graduation (and they have decided to get married). Abigail gets a call from grandma Lynn, and she decides to go back to Pennsylvania to see her husband in the hospital. She doesn’t intend on staying very long. The entire place just brings back to much memories of what she has lost, and on top of that Lindsay and Buckley are very mad with her. The most beautiful line in the entire story is said in this part: “How can I be expected to be trapped for the rest of time by a man frozen in time?” It’s a line from a little play Lindsey and Susie used to play, but applies to Abigails feelings so right.

But when she sees Jack again, when she talks to him, it is hard to leave him again. After all this time, she still loves him so deeply. She decides to stay, at least for a little while.

The story ends with Susie moving along to her ‘wider heaven’. This is where you get to when you learn to let go of your beloved ones on earth. Before that, you’re in this ‘small heaven’.

I loved the book because it describes heaven so beautifully. And the relations between the people are so complicated. It is a very moving story. There were times while I was reading when I had tears in my eyes. There are a few bits I didn’t like, because they were too long or too unrealistic, but overall it was a beautiful book. I would definitely recommend it.