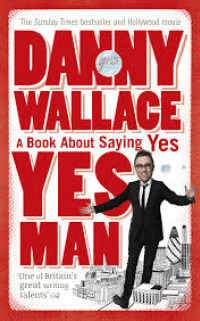 The author is Danny Wallace. The book is published in 2005 in Great Britain. The publisher is New York Riverhead Books

Danny Wallace, born at 16 November 1976, is a British filmmaker, comedian, writer, actor and presenter of radio and television. He lives in London with his wife, an Australian publicist, and their son. His notable works include the books: ‘Join Me’,‘ Yes Man’ and the TV series ‘How to start your own country’. The book ‘Yes Man’ is filmed and it released in 2008. It’s developed with Warner Bros.


In the book ‘Yes Man’, Danny describes how he spent almost a year saying ‘Yes’ where once he would have said ‘No’, to make his life more interesting and positive. So the story of the ‘Yes Man’ is a true story.

Danny: ‘The Yes Man’. He is the main character in this book. Danny is also the author of the book. He says ‘Yes’ to everything for a year so in this book is he an optimistic-thinking chap.

Ian: Ian is Danny’s best friend. In the beginning he was the only one who knew about ‘The Yes Thing’. Although Ian found it in the beginning a stupid boy-project, supports he Danny the whole year. His promise was to don’t say anything to anyone, but he didn’t keep this promise.

Wag: Another friend. He knows nothing about the ‘The Yes Thing’.

Jake: A bloke who Danny met at a party. Danny said to Jake: ‘Just say more yes’. Jake does this and he experiences many beautiful things.

Marc: Marc is also a ‘Yes Man’. Danny wanted to meet him so he flies to Barcelona where Marc lives.

This book is about the life of a ‘Yes Man’. This ‘Yes Man’ is Danny. It means that he always answers with a ‘Yes’. This is his challenge for a year.

The most important theme of the novel is positivity. Danny wants to go for everything and really live his life. He wants to meet new people and do a lot of things. He gives each offer an opportunity.

It’s hard to give you a summary of the book. There happen so many things in this book; I can’t tell you all the main things. So I tell you the things which I find the most important.

The book begins; Danny is recently single and not happy with his life. He says ‘No’ to almost everything. He’s very lonely and the most of his friends leave him. Then, one day, a stranger on a bus tells him to say “Yes” more. Danny doesn’t know who that stranger is and why he said that. He couldn’t ask him something because immediately after the stranger said this he gets off the bus. Danny thinks a little while about message of the stranger and he decides to do this. He promises himself to say “Yes” to everything for a year long. Also he decides to write everything about the ‘Yes Challenge’ in a diary. Soon after vowing to be more open, Danny wins $45,000 and becomes a television executive, far above his level of experience or ability. Also becomes he a minister, falls afoul of psychotropic drugs, gives spare change to anyone who asks, invents things, travels the globe, vows to help the son of a murdered sultan to escape and he experiences a lot of other thinks. Because Danny said ‘Yes’ to a host of a show about positivity, he meets a monk. This monk tells him that the whole ‘Yes Thing’ isn’t happen accidental. The monk tells Danny everything about the powers of the Supreme Being. Danny doesn’t know what he must think about it.

Danny also met due the ‘Yes Challenge’ a girl who he really likes. Her name’s Lizzie and she lives in Australia. Lizzie asks him to come to Australia but he can’t go, how much he would love to. He can’t buy a plane ticket, because he wasted a lot of money through the ‘Yes Challenge’. So he breaks his rule to say ‘Yes’ for a year and he says ‘No’ to Lizzie. But after a while he felt sorry for saying ‘No’ and he still decides to go to Australia. He has a great time and closes “the Yes year” there. He has said ‘No’ for one time, so he failed in doing his challenge.

I first thought it was fiction, that it wasn’t real. But when I was reading I began to realize that it wasn’t. It was a hilarious book! Although, in the beginning it seems a little farfetched to me, but then I realized that this whole story was real, so the farfetched beginning made it even funnier. Also I think the writing of Danny is amazing, it looks like everything that happened comes to life and you’re there yourself. I can really recommend this book, it’s not hard to read and it’s also very funny. The moral of the story is: Stay positive in life and say ‘Yes’!