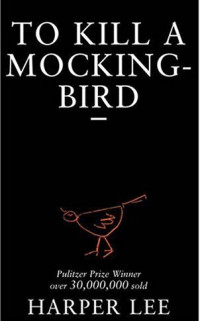 The title of the book, To kill a Mockingbird, refers to something Atticus said when Jem and Scout got their air-rifles: ‘It’s a sin to kill a mockingbird, because all they do is just sing their hearts out for you.’
There are two ‘mockingbirds’ in the book: people who did not do anything wrong, the reverse is true: they do good things, they ‘sing their hearts out’; but still they are treated badly.

The first mockingbird in the book is Tom Robinson. He did not take advantage of Mayella, but helped her and felt sorry for her, which is very special because Tom was black and Mayella white. But still he is accused of taking advantage of her and found guilty by the jury. He also dies as a mockingbird, trying to escape from prison.
The other mockingbird is Boo Radley. People talk about him and find it strange that he does not come out of his house. They even imagine stories about him eating his mother and father. But he does not do anything wrong, in the end he even saved Jem and Scout from Bob Ewell. The decision of Heck Tate, to not tell the jury he probably killed Bob, avoided him to be killed like a mockingbird.

The motto of the book is: ‘Lawyers, I suppose, were children once’. The meaning of it is, that many people seem to lose their innocence and sense for other people, when they become lawyer. But, although it’s hard to notice, there must be some weakness under their strictness and arrogance.

Scout: the most important person of the book, also the I-figure. Scout is a young girl, in the book 6 to 8 years old.
Jem: Scout’s elder brother, 4 years older than Scout.
Dill: Their friend from Meridian
Atticus: Scout’s and Jem’s father, a lawyer.
Calpurnia: Cook and substitute mother at the Finches’ house.

The book had two parts and 31 chapters.
The plot of the book is about the two mockingbirds: they come together in the end.
The book commends on the situation in the South of the U.S.A, especcialy on the black-white contrast.

The location is Maycomb, Alabama, U.S.A

The story takes place in the thirties, which were the years of crisis in the U.S.A. The time lapse of the book is about two years.

Scout is the I-figure, so she tells the story. The book is one big flashback. You know that, because in the beginning of the book, Scout says something in the present. After that she tells the story. She does that in a childlike way, not understanding everything. The events are described in a chronological way.

The themes in the book are:
· discrimination of blacks by white
· poverty
· justice
· Scout and Jem develope from children to grown up (you call that a bildungsroman, see genre)

The used language is very descriptive. There are complicated sentences, alternate with dialogues in slang.

The book belongs to the head genre prose, it is fiction and a novel. It is a psychological, social, and mostly autobiographical novel.
Psychological, because it deals with the mind of a young girl and her reactions to the events in the book.
Social, because it is also about the black-white contrast in the thirties in the South of America.
Autobiographical, because Harper Lee has used many of her own memories in the book.

Harper Nelle Lee was born in Monroeville, Alabama in 1926. Harper was the first female winner of the Pulitzer Prize with ‘To kill a mocking bird’. The book is made into a film in 1962.