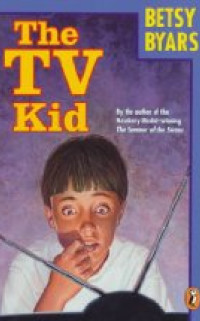 Meld je aan!
2) The book is called the TV Kid because the boy (Lennie) always watching TV. He doesn’t wants to make his homework or help his mum, but he always wants to see television.

3) In the first six chapters the story takes place in Lennie's room and at his school. When Lennie is at home he usually is in front of the TV. In the next seven chapters is Lennie in a stone house, because he was bitten by a snake. And finally in the last six chapters Lennie spend his time in a hospital.

4) Lennie is always watching television, he don’t like school and all the things he must do for his mother. When he’s learning he begins to dream about the things he has seen on television. Lennie wants to go to an old house but when he want to take the key he see a police car. He goes under the house and he hopes that the police car drives away. It did, but when he was under the house he saw a snake, and the snake bites. He went to the telephone in the house but it didn’t work. He fell on the ground. A time later the policeman stood close to him. He brought him to the hospital. The doctor said that everything’s going to be all right.


5) – Lennie: a little boy from 8/10 years old,.
he’s a very thoughtful boy,
he can find it well with his mum.
his father is dead and his mother is running a motel.

7)
The pushing started a small slide. The rocks shifted. A few tumbled to the ground and rolled away like balls. Mixed with the sound of the shifting, rolling stones was another sound. A rattle. No sooner had Lennie heard it than he felt the sharp stab of fangs on his ankle. He jerked his head round, and in the shadow of the crawl space he saw a snake. It was so nearly the colour of the ground that it seemed for a moment to be the ground itself set in motion.
This part of the book is very stretching because that’s the part that Lennie is biting by a snake.


8) I recommend this book for every age. It’s a book with a very good story in it. A little scary but that’s a good thing I think.