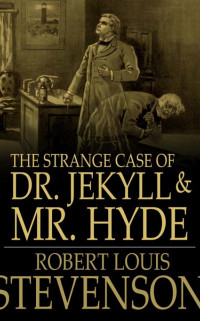 Title: (The strange case of) Dr Jekyll and Mr. Hyde

Summary: Mr Utterson, a lawyer, and his cousin, Mr Richard Enfield, were taking their Sunday morning walk in London when they passed a dark, empty house in a narrow street. Mr Enfield told Mr Utterson that one morning he had witnessed a horrible accident at the doorway of the old building. An ugly-looking man, short and a little bit deformed, had collided with a little girl and trampled over her body. Enfield and some bystanders had forced the man, who gave his name as Hyde, to pay damages to the child's family. Hide entered the house with a key and came back with a cheque. The next day they went to the bank and to Enfield's surprise, the cheque was legal. Enfield and Utterson don't understand how Hyde got the key.


Utterson knew a little about Hyde and Hyde's strange connection with the respectable Dr Jekyll. Returning to his house he re-read Jekyll's will, which provided that all Dr Jekyll's possessions were to pass to Edward Hyde. There was also a note that Hyde should take possession immediately in case of Henry Jekyll's "disappearance or unexplained absence for any period exceeding three calendar months". Utterson decided to make investigations. He first called on Dr Jekyll's lifelong friend, Dr Lanyon. It appeared that the relations between the two doctors were severely strained. Dr Lanyon, who looked very ill and exhausted, said that Dr Jekyll was no longer the man he used to be.


Next Utterson looked for Mr Hyde. He found him in front of the deserted house. Hyde stared at him angrily, but before he disappeared into the house he gave Utterson his address in Soho. He then went to Jekyll's house, but Dr Jekyll wasn’t there. Jekyll's butler, Poole, told Utterson that Hyde had a key to the laboratory and that he himself had orders to obey Mr Hyde. Utterson began to believe that Hyde was blackmailing Jekyll and might ultimately kill him.


Utterson spoke to Jekyll when they had dinner together. Utterson offers Jekyll to help him with Mr Hyde, but Jekyll says that that is impossible and makes Utterson promise to be fair with Mr Hyde. About a year later the old, respected Sir Danvers Carew, a MP and a client of Utterson's, was found murdered. The maid had seen a man who she recognised as Mr Hyde, who had once visited her master, and whom she did not like. Utterson brought the police to Hyde's home in Soho, where they found out that Hyde had disappeared. Dr Jekyll showed Utterson and the police a letter signed by Hyde in which he wrote that he was going away forever. He had left the stick with which Sir Danvers had been beaten to death at the scene of the murder. Utterson recognised it as one he had given to Jekyll. Besides, a handwriting expert told him that Hyde's letter was written in a hand identical with that of Jekyll. Utterson shuddered at the thought that Jekyll might be protecting a murderer. Jekyll was like a few years before, but after Utterson had talked to Lanyon, who already knew he wouldn't live much longer, Utterson heard that Jekyll didn't want to see him too often. Jekyll told him that it was his punishment. Dr Lanyon died. Among the papers he left was an envelope addressed to Utterson and containing another envelope marked "Not to be opened till the death or disappearance of Henry Jekyll".


One Sunday morning Utterson and Enfield were again walking past the deserted house. Now they saw that it was an additional wing to Dr Jekyll's house used as a laboratory. This explains why Hyde had a key! Looking up they saw Dr Jekyll sitting at a window with a very sad expression on his face. Suddenly some great horror or pain seemed to come upon him and he closed the window abruptly. Greatly agitated, Dr Jekyll's butler called on Utterson one night. He reported that his master had shut himself up in his laboratory for a week, refusing to show himself and writing curious notes in which he asked the butler to go to all the chemical houses in London and get him certain drugs.


Utterson went to Jekyll's house. He and Poole thought that Jekyll was murdered, and that the murderer was still inside (they heard Hyde's voice). They broke into Jekyll's laboratory with an axe. Inside they found Edward Hyde, dead, with a bottle of poison beside him. There was not a trace of Dr Jekyll, dead or alive. But they did find some papers left by Jekyll: a confession addressed to Utterson, a will drawn up in his favour, and a note telling him to open Dr Lanyon's envelope. Utterson returned home and went through all the documents. Dr Lanyon's letter solved the mystery. He wrote that one-night Hyde had appeared at his office, dressed in clothes that were far too large for him and looking desperate. He claimed some drugs which Dr Jekyll had left there for him some time ago. Jekyll had sent Lanyon a letter in which he asked him to go to his house and get a drawer and return with it and wait till Hyde would appear. On swallowing the drugs Hyde had suddenly been transformed into Dr Jekyll, while Dr Lanyon looked on overcome by horror. The shock had caused Dr Lanyon's death.


Dr Jekyll's own letter of confession was more detailed. He wrote that he had invented a chemical witch changed him completely from the good, kind, respectable Dr Jekyll into the horrible fiend Mr Hyde. As Edward Hyde he was free to roam the dark, shady parts of London, become a member of the underworld and commit crimes without fear of recognition. Gradually the Hyde personality became the stronger one. Despite his efforts Jekyll did not succeed in banishing Hyde. He needed more and more drugs to transform into Dr Jekyll. After a time, Jekyll could no longer get the chemicals necessary to transform him back into his better self. In despair he shut himself up is his laboratory, experimenting with one drug after another. All was in vain. There was no way but to kill himself.


Setting: The story takes place in London around 1870, since it is said that Dr Jekyll was born in the year 18, and that he was fifty years old. For the most part are the houses of the main characters themselves described. The houses are well furnished, and Dr Jekyll has a laboratory in his house.


Title: The title describes the names of the two-in-one-person. The strange case of Dr Jekyll who is in fact the good side of the more evil Mr. Hyde.

Dr Henry Jekyll, a good friend and client of Mr. Utterson, the lawyer, through whom we get to hear the story. He has a good reputation. He has a nice house with a laboratory and loyal staff. He invents a drug that transforms him into his evil self. This evil self he names Edward Hyde. This way he can keep his good reputation as Dr Jekyll, but as Mr. Hyde he can let his evil self-loose. In the last chapter Dr Jekyll tells us his statement of the case. He explains what he did and why he did what he did. ’With every day, and from both sides of my intelligence, the moral and the intellectual, I drew thus steadily nearer to that truth by whose partial discovery i have been doomed to such a dreadful shipwreck: that man is not truly one, but truly two.’ All his development in the story is written down in the last chapter. He first believes that if the two sides are separated, everyone will be relieved of all that was unbearable. His drug doesn’t quite separate good and evil, but gives him two appearances: one is the all-out evil Mr. Hyde, and the other is the old Dr Jekyll himself. At the end he discovers that he is slowly losing hold of his original and better self, and becoming slowly incorporated with his second and worse. He understands that he must kill himself. Dr Jekyll aka Mr. Hyde is a round character, because he has a complex personality.


Mr Utterson, a good friend of Henry Jekyll is a lawyer. He is a kind and trustworthy man. Lean, long, dusty, dreary, and yet somehow lovable. In the first chapter his character is well extensively described. As the reader you know as much as he does in the story. Besides finding out Jekyll’s past, he doesn’t have much development. You don’t even get to know his first name.


Mr. Edward Hyde, the evil side of Dr Jekyll. He is a cruel, murderous and solitary man. Something about him is off. In the book he is often described to have something that is indescribable. You don’t get to know much about his character, other than that he is the pure evil form of Henry Jekyll. ‘the evil side [...] was less robust and less developed than the good which I had just deposed. [...] Edward Hyde was so much smaller, slighter, and younger than Henry Jekyll.’

The theme of the book is good versus evil. Dr Jekyll fights against his evil side, eventually losing the fight and ending both appearances’ lives. His normal personality is intellectual and morally good. While his evil self is just pure evil. The evil tempts Jekyll into doing wrong things without it having any consequences for his ‘good’ reputation.


I feel like the moral of the story is to let people know that you cannot do wrong without consequence. Jekyll tries to separate his evil side to be free to do whatever he wants to do. In the end this doesn’t work out. The evil almost gets the upper-hand on Jekyll, but he kills himself and thus killing his evil side with him. You cannot separate good from evil.

I actually really liked this book. It’s a very short book, so you can read it through easily in an hour or two. In the beginning of the book I didn’t quite understood what was going on. The book seems very mysterious, but perhaps that was the music I was listening to at that moment. I honestly had not expected Dr Henry Jekyll to be the same person as Edward Hyde. Reading Dr Lanyon’s letter, I was genuinely surprised. I had heard of the title of this book before. It sounded really familiar, but I did not know what the story was. The first eight chapters, the tension really build. After the denouement, the story got a bit dull for my likes. But the last chapter really helped the whole story to get more plain, which was nice.


The scene where Hyde changes into Jekyll in the letter of Lanyon, and the scene where Poole, the servant, and Mr. Utterson knock down the door to Jekyll’s room, are my favourite scenes in the story. They are exciting and made me very curious as to what was going on.


The language in the book was a bit old, but quite easy to understand. I think I might have liked the book even better if it was written in first-person, instead of third person.

All in all, this very short book, was way better than I expected it to be. The title doesn’t spoil anything. I would highly recommend anyone to read this book if they haven’t already.