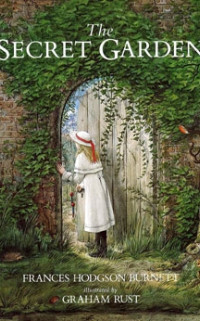 In the beginning...
Mary was a child, who lived in India with her parents. But her mother was always with her friends going out and her father was at work. Servants take care of her. Mary was often ill. She was an unhealthy child.
One morning she was alone, she didn’t know what has happened. Mary was in the garden, playing with the flowers when two men came to look for her. They told her that her father and mother had died.

Mary had no family in India, so she went to England to live with her uncle, Mr Graven. She heard that he lived in a big house.
When she woke up in her new room, came a servant in the room, her name was Martha. Martha told her to go outside, to the gardens. Martha told her also that one gardens is shut up because that was the garden from mr Graven ‘s diseased wife. After Martha had gone. Mary went into the gardens. Mary found a men in the garden. She talks with the men about the garden and Martha ‘s little brother Dickon. Every morning, afternoon and day was the same but at one day… Mary was still in the garden; she played with everything she found. She saw something in the garden… a key!!!!

At the end...
The key was from the shut up garden Mary, Dickon and Ben went to the garden and they take care of the garden. But it was a secret because when mr Craven find out…
Mary heard every night someone cry she looks everywhere but never found a crying person. But at one night she heard the cry and found the person. It was Colin the son of mr Craven. He was sick and was never outside. He was very unhealthy because he was never outside. Mary told him stories about the garden and he want to see the garden. But they (Dickon and Mary) don’t know what to do because he was always sick.
At ones, the garden was not a ugly dead not any more it was a garden with love and life. Colin loved the garden and so did Mr Craven. Colin was never sick not any more because now he’s always in the garden!

Mary was a very alone child but now she knows that people care about her and that is a great feeling!

Place:
The story takes especially in the garden place but also in the manor. In the beginning takes the story places in India because Mary’s father worked there and at the end it’s in England. So the story takes most of the time place outside and especially the secret garden.

Time:
When the story takes places, I think al couple years ago because the have not very modern things and stuff like that.

Own opinion:
I did like the novel. It’s a great story and I can live in the story. It’s a good novel. There are chapters I did like and chapters that I didn’t like because someone where boring. But the whole story was good and great. I can imagine the secret garden and I know Mary very well you know everything about her and I think that’s important for a main character!