Basil Hallward, an artist, meets Dorian Gray and paints his portrait. The artist is so infatuated with Dorian's beauty that he begins to believe it is the reason for his quality of art. Dorian becomes convinced that beauty is all-important and wishes his portrait could age instead of him. Beware of what you have wish for! Each time Dorian commits a sin his portrai…

Basil Hallward, an artist, meets Dorian Gray and paints his portrait. The artist is so infatuated with Dorian's beauty that he begins to believe it is the reason for his qualit…

Basil Hallward, an artist, meets Dorian Gray and paints his portrait. The artist is so infatuated with Dorian's beauty that he begins to believe it is the reason for his quality of art. Dorian becomes convinced that beauty is all-important and wishes his portrait could age instead of him. Beware of what you have wish for! Each time Dorian commits a sin his portrait ages, showing him what is happening to his soul. 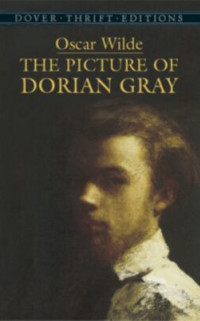 Luister nu!
First assignment: I found 3 songs that can be linked with this book:

I've got books that say the good man's golden
And more that say the bad will fall,
So many men have drowned in evil, and left Lucifer standing tall
Don't take the devil's dare, don't gamble when the game ain't fair,
Lock and bolt the doors, can't let the devil use you anymore

You got to listen all you mugs and reivers, if you do any wrong
You make it right

You can't be a make-believer, 'cause soon you're gonna pay the price,
Lying, hat and pain, all part of the devil game,
Got his foot inside the door, but you can't let him use you anymore

Pray, for devils have no reason, Satan waits to curse your ways,
Have you seen it in his eyes in the sunset,
Have you wondered if he's laughing when you play,
Has he asked if you're alone if what he sees is all you own,
Has he offered you happiness, money, or much better lays
Satan leave me, leave me lonely, leave us alone

disfigured and oblique
From the appetite that i seek

3) Picture of you (Boyzone)

Didn't they say that I would make a mistake
Didn't they say you were going to be trouble.
People told me you were too much to take
I couldn't see it
I didn't wanna know.

(Chorus)
I had a picture of you in my mind
Never knew it could be so wrong.
Why'd it take me so long just to find
The friend that was there all along

I've got books that say the good man's golden and more that say the bad will fall
Dorian got a book from Lord Henry Wotton so he would know how to live and how to enjoy his life. Lord Henry is a rich man who looks a bit down on lower classes. He told Dorian that he is a young and beautiful man and that he would be old and ugly later. Dorian wished he would never be old and ugly and he wished that his portrait would be.

So many men have drowned in evil
And so does Dorian.

Don't take the devil's dare
But Dorian did dare the devil. He didn't know it from the beginning but it was anyway not wise to put his soul in the picture.

if you do any wrong, you make it right
Dorian didn't make things right. He had troubles with a lot of people but he didn't care. He made another mistake when he dumped Sybil Vane, an actress. When he would make it right, she had committed suicide.

soon you're gonna pay the price
Dorian payed the price when he put a knife in the painting, because he died after he did this.

Lying, hat and pain, all part of the devil game
Dorian wasn't very popular any more after his pact with the devil.

Have you wondered if he's laughing when you play
The devil was laughing because he had full power over Dorian.

Has he offered you happiness, money, or much better lays
The pact offered only bad things for Dorian. His life wasn't the same any more. Finally the pact offered Dorian his death.

Satan leave me, leave me lonely
A few years after the pact, Dorian wishes that the pact with the devil could be stopped

Dead bodies everywhere
A lot of peoples died during the book. First Sybil who committed suicide. The second was Basil Hallward. He made the portrait of Dorian Gray en was Dorians best friend. One day they quarrelled because Basil didn't agree with Dorians lifestyle. During the discussion, Dorian put a knife in Basils body. He asked Alan Campbell, an old friend who is biologist, to clear up the body, but he couldn't live any more after he did that and he committed also suicide. Later Dorian met James Vane, Sybils brother. James hated Dorian and wanted to kill him, but by accident he died also. The last dead body, is Dorians. He put a knife into the painting and he died because his soul was into the picture. I dare to declare that Dorian was already dead when he gave his soul away because it was the devil who ordered his life.

Piles of blood
This is also about all the people who died in the book. After he killed Basil, Dorians hands were blood-stained on the picture.

I'm bleeding from the inside
Dorian regretted his decision to give his soul away because everyone hated him therefore. He truly regretted his acts but it was too late.

The holocaust was nothing compared to my lividly
Comparing this book with the Holocaust is of course exaggerated but it's a bit the same storyline. Someone took a dreadful decision and a lot of people suffered by this decision.

There's nothing you can do
Dorian couldn't do anything to get his soul back. He tried it when he destroyed the picture but through that he took his own life.

Didn't they say you were going to be trouble
Same thing as the sentence before.

I couldn't see it, I didn't wanna know
Dorian was blind for his own acts. If he would have considered everything well, he would have taken other decisions in his life.

I was alone
In fact he wasn't, because he had an alliance with the devil. But after he killed Basil, he hadn't any real friends.

You'd be there, when I needed somebody, the only one who could help me
Basil and Sybil could be there for Dorian but by his own stupid mistakes they weren't.

I had a picture of you in my mind, never knew it could be so wrong
When you read a book you try to imagine what kind of people the personages are. I, and I think a lot of readers with me, had a better picture in my mind for Dorian. I was a bit surprised by the things he did. At the beginning of the story, he was a great young man from the high class of London.

Why'd it take me so long
Dorian can ask himself why did it take so long to face the reality. It took 13 years before he did something by committing suicide.

Second assignment: I found 2 reviews on this book:

1
Dorian Gray is a beautiful young man. He poses for Basil Hallward, a famous painter. Basil's friend, Lord Henry Wotton, has a bad influence on people. He tries to change Dorian's way of thinking. Lord Henry tells Dorian that he'll be old, wrinkled and ugly. Dorian has to enjoy life and forget about other people.He wishes that he would stay young and that the picture would grow old. Basil gives the painting to Dorian, because he doesn't want to show it in a gallery. One month later Dorian falls in love with Sibyl Vane, an actress. He decides to marry her,but when Dorian goes to see her in a play,Sibyl gives a terrible performance.Dorian is very disappointed and he brakes up with her. He discovers that the picture has changed. It shows some aspects of cruelty. He wants to apologise to Sibyl, but she has committed suicide.Dorian decides to put the painting away in the attic. It becomes older and shows more and more cruelty.When Basil asks Dorian to show the picture at an exhibition, Dorian tells his secret. Basil is shocked and Dorian kills him. Dorian asks Alan Campbell, a biologist , for help. Alan destroys the body and he commits suicide. James Vane,Sibyl's brother, tries to kill Dorian. One day, James is shot accidently by some of Dorian's friends. Dorian wants to become a better person, but the picture doesn't change.When he tries to destroy it, he kills himself.

2
Dorian Gray is a beautiful boy and he is 17 years old. A friend of Dorian, Basil Hallward painted a painting of him. Lord Henry (a friend of Basil) liked Dorian also and he convinced Dorian that Dorian had to enjoy of his beautiful face and he gave Dorian a book. In the book was standing Dorian had to live. Dorian met Sybil and married with Sybil. When Sybil died Dorian picked up the way of live of Lord Henry.
Every time when Dorian something did wrong the painting changed into a furious men. 13 Years Dorian lived on that way, he did know what happened with the painting. After 13 years Basil came to Dorian and say that he heard bad things about Dorian. But Dorian denied. Basil and Dorain went to fight but Dorian grabed a knife and killed Basil. Dorian can’t live with this action and he walked to the painting and he stabbed the painting with a knife. Dorian died immediately and the painting changed in a old man. The police identified him on his ring, so much his was changed by the painting.

There are a lot of points missing in both reviews: there's no mention of time and place, the leading characters were very rich en they ate a lot outside, Dorian feels guilty after he brake up with Sybil and he wants to apologize, Dorian had a deal with the devil after he wished that his face would stay the same forever. In the first review is also no mention of the book that Lord Henry gave to Dorian, that Dorian was recognized on his ring and that Dorian followed 13 years the rules of Lord Henry's book. According to the second review Sybil died. That's a bit hazy, she committed suicide because Dorian broke up with her. Also James Vane doesn't exist in this review.