The murders in the Rue Morgue

Title: The Murders in the Rue Morgue.

Release: First edition published in 1975. This is the ninth impression in 1983. Stories of Mystery and Imagination. Simplified by Michael West and Roland John.

The introduction tells us about the main person, the France investigator, August Dupin. A clever man who could solve mysteries which the police couldn't.

The actual story starts with a report in the evening newspaper about a murder of a mother and daughter brutally murdered in their home early that morning,. They lived on the third floor in a house in the Rue Morgue. Who killed them? Walking up the stairs the policemen could hear voices of a man and of 'something else'. The doors were locked when the police tried to get inside. It was quiet when they reached the terribly disordered room where they heard the cries coming from. They found a long knife, covered with blood, hair that was pulled from someone's head and a bag with four thousand francs on the floor. All doors and windows were closed. It took four men to pull the body of the daughter out of the chimney. Outside was the body of Madame Espanaye, head nearly cut off. Next morning Dupin red the follow-up story in the morning paper: Three days before the murder, Madame Espanaye's four thousand franks were brought to her by Adolphe Lebon a friend of Dupin: two bags, heavy to carry. The police took Lebon to prison, because he was the only man, who could have a motive. Dupin couldn't believe Lebon could be the murderer. The murder was such a mystery, so Dupin decided he had to solve it. He went to the place of the crime and he made some observations in the garden ( where he picked something up) and in the room where were both the bodies. He examined the windows. On their way home Dupin stopped at the office of a newspaper. He didn't speak until the next afternoon while he was waiting for an unknown visitor. He said that he didn't agree with the police about the complexity of the murder. On the contrary, their questions were for Dupin the leads for his search. So in a way they made it easier for him to solve the mystery:

-There was the matter about the voices. The strange sound of one of them could not be explained.

-How did the killers escape? The door was locked from the inside (key still in keyhole). The chimney was to narrow to escape through. The police said they were unable to open the windows from the inside (there were nails in the windowpane that served to keep the windows from falling when open), so to their opinion the persons could not have escaped through the windows. Dupin was convinced that they did escape through one of the windows and he explained that after some search he found hidden springs that kept the windows shut. So when he took the nail out of the windowpane after using the spring opener, he was able to open one of the windows. He thought something had to be wrong with the second window; "things are not what they seem". He found that the nail of this window was broken with force which made it possible to open the window! The spring kept the window shut and so the police was deceived. He was convinced the murderer escaped through this window! But also entered through it, jumping as a gymnast the dangerous one and a half meter distance from the rain pipe under which Dupin found a ribbon, the kind sailors use to tie their hair with.

-Because the murderer did not take the money it was no robbery, so Dupin thought more of an accident.

-He was also puzzled by the force by which the two women were killed. They were both strangled and cut as if they were murdered in two different ways. The person who hid the one body in the chimney must have been extremely strong. The same strength was used to swing the second body out of the window.

-He found out that the bruises on the bodies were that of an orang -utan. In one hand he did find some thick red-orange coloured hairs that easily could have been from such a beast!

But he could not tell what really happened. He had to wait for the mystery guest, the owner of the beast. He would come on an advertisement Dupin had put in the newspaper in which he asked for the sailor, owner of a monkey that was caught, to come and pick up the animal. Dupin was certain that the sailor would show up because he was innocent of the murders.

The man came and he was a sailor indeed!! His hair ponytail-tied with a ribbon. It was an honest and brave man. His story was that he had taken the monkey from his travels to make money with. The beast escaped. The man tried to chase the ape back into his room. But instead he scared it away with his stick. The animal ran of with a kitchen knife and the man chased it until it climbed up the rain pipe through the open window of the room of the victims. The sailor tried to follow the animal, but he could not reach the 1 ½ meters to the window. He witnessed the horror scene: how the ape panicked because of the yelling and fighting of the women and at the end used the knife to kill one of them, how he swung the other woman around in the air until her neck broke.... Then the ape saw his master and became scared. He hid one body in the chimney and threw the other one out of the window. By talking the sailor tried to calm the beast.Than he heard voices and he ran of. Looking over his shoulder he saw that the monkey climbed out of the window and shut it with great force! Than it sprang on the pipe. The sailor raced away!!!

Two days later the sailor himself found the orang-utan and sold it to a zoo. But before that, the facts were told to the policemen who felt ashamed that they didn't solve the murder themselves.

Dupin's friend Lebon was set free at once! 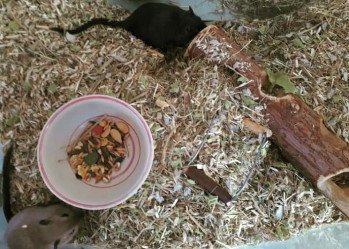 Andere verslagen van "The murders in the Rue Morgue"