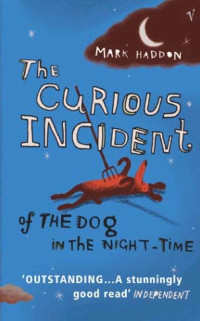 Luister nu!
The curious incident about the dog in the night-time
The writer of the book is Mark Haddon.
This book as got 226 pages and it is published by Vintage Contemporaries, New York.
The first edition was published in 2003 in London.
Choice
I chose this book because it was an option on the list and I was most attrackted to this book.
Main character
The main character of this book is Christopher John Francis Boone and he has Asperger Syndrome, which means that he is autistic. He is fifteen years old when he finds a dead dog. Christopher feels that he has to find out who killed the dog. He wants to write a book about his detective work.
He really doesn’t like the colour yellow, why? I don’t know. He has got brains like a computer and he knows every prime number until 7057. He doesn’t want to be touched, he doesn’t understand human emotions or jokes and he doesn’t understand metaphors.

Other characters
There are some more characters in the book that are ‘important’ :
The mother of Christopher is important  as well, when Christopher finds out that his dad lied to him about his mother being dead he walks away and goes to his mother.
The father of Christopher killed Wellington, the dog of the neighbour. He doesn’t want Christopher to look for the one who did it. He killed the dog because the master of the dog was having an affair with Christopher's mother. He lied to Christopher all the time about his mother being dead.
Plot Summary
The book is a detective. The book is set in Swindon, that is a (fictional) town in England. Christopher’s father lives in Swindon, his school is located there too. Swindon is a quiet town. The house has got a garden, where Christopher likes to be, and sometimes also likes to hide. Mother lives in London. At the end of the story, Christopher goes to his mother by train and by bus. But he finds it hard to find the way and he thinks London is noisy.
It is really weird to follow because you follow the story through the eyes of an autistic boy. The streets play a very important role in the book as well.

Christopher tries to find out who killed the dog Wellington. But in the end he tries to find out what happened to his mom, and to find her. When he finds out that his father lied to him about his mother being dead he is going to live with here.
The story takes place in the autumn of 1998. Christopher lives in the same time as we do. The most things are the same in the book, if you compare the story with our time, even though the story takes place a few years earlier.
Conclusion
My final thoughts on `The Curious incident of the dog in the night time’ are that it is a very good book, because you can really image how Christopher feels. And if Christopher wants to know something, you want to think along with him, you want to help him.
I would like everyone who bullies someone else to read it, so that they can learn to respect people who are different than others. Maybe the writer wants to explain how it is to live as an autistic boy.
There are advantages of being autistic:
- He does the same every time so with solving the mystery he asks the same questions every time but he gets different answers from everyone so he knows something is wrong.
- If there is something on his mind, he wants to solve it. So he does the things he wants to do, otherwise it will drive him mad.
There are also disadvantages of being autistic:
- Christopher doesn’t know how to react. He can only tell his father he is angry, by shouting.
- He constantly asks questions to himself. And has long conversations with himself.
- Christopher does not know how to react to new things and he does not see emotions.

The "advantages of being autistic"don't make any sence and it aren't advantages and it isn't right. you could have better explained why is is an advantage, or remove it...