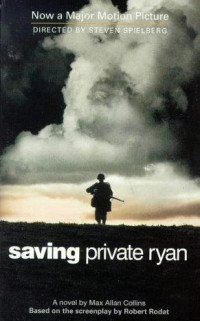 Meld je aan!
1) Summary:
It all starts when a secretary saw three brothers where killed in combat. But that wasn't everything: the fourth brother was alive somewhere in France. This was the beginning of a special mission called saving private Ryan.
Captain John Miller was given this important task to save private Francis Ryan. After D-Day the captain and his men started the search after the lost son.
They started a very dangerous mission, they would walk and walk and kill every German on there way until they had found private Ryan. First there was a village named Neuville-au-Plain were private caparzo was shot by a German sniper. He wanted to save a little girl. Private Jackson sniped the German sniper right in the head. They moved on and somebody of another division said he knew a private called Ryan but is was a mistake. When they arrived in the next American post a man knew private James Francis Ryan he said he was some where around Ramelle.
When they arrived in Ramelle they found private Ryan but he didn’t want to go with the men. He wanted to stay and defend his post. There was a battle with the German.

Many men died including captain John Miller. The story end on the graveyard. Private Ryan who was an old men now stood in front of the grave of his captain and said to his wife “ have i lived a good live? Am I a good man?”

2) 10 words i don’t understand:
a) earthquake: A sudden movement of the earth's crust caused by the release of stress accumulated along geologic faults or by volcanic activity
b) piled: A quantity of objects stacked or thrown together in a heap
c) casualties: An accident, especially one involving serious injury or loss of
life.
d) hedges: A row of closely planted shrubs or low-growing trees forming a fence or boundary
e)directing: To manage or conduct the affairs of; regulate.
f) several: Being of a number more than two or three but not many: several miles away.
g) angrily: Feeling or showing anger
h) satisfied: Filled with satisfaction; content: a very satisfied customer
i) toward: Located ahead or in advance: kept her eye on the forward horizon

k) provided: To furnish; supply: provide food and shelter for a family.

3) 5 comprehension questions:
- Who prays?
- Who knows where the captain is from?
- Who takes caparzo’s letter?
- Who kills the German sniper?
- Who says, “I’d shoot myself before i even got off the boat!”

4 Why you like/dislike the book
I like this book very much because i really like reading war books. It felt real when I was reading it but that was because I saw the movie.
I saw the characters in front of me while I was reading it.
That's why I liked reading the book.
I’d disliked the book because it was to short and because I didn't understand a couple of words in English.
I would advise this book to everybody who likes to read some action books.