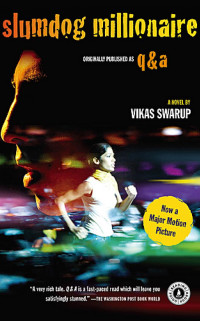 1. Explanation of the title:

The title is ‘Slumdog millionaire’ because before Ram Mohammed Thomas enters the television show ‘Who Will Win A Billion’, he lives in the slums. When the book begins, he has already won the show, therefor he is now a millionaire. But he is accused of cheating for two reasons. One, the company actually does not have enough money yet to give Ram his price. Two, how does a boy from the slums, a slumdog, know all the answers?

Previously, the book was published as ‘Q&A’. That refers to the questions Ram is asked and the perfect answers that he gives.

When the story starts, Ram has been arrested and is now locked up. He has not yet been convicted, and a lawyer has not been appointed to him yet, but he has been tortured by the police. Moments later, his lawyer walks in and tells the police she is taking Ram and will now represent him.

Smita Shah, lawyer, does not really believe in Ram’s innocence. She also would not know how a guy from the slums would know all the answers. Then Ram starts explaining.

Every chapter is another question answered. As the chapter begins, a new story begins. Ram tells Smita about his life, and every story he tells, shows how he knows all of the answers. For instance, Ram worked for Neelima Kumari, the tragedy queen of India. He learns a lot about her life. And he is lucky, because the tenth question is: ‘Neelima Kumari, the tragedy queen, won the National Award in which year?’ And because of his experience, he knows what he is talking about and he knows the answer to the question. And so on with all his questions. He uses a lucky coin to win and with a lot of important questions in his life.

At the end of the story, Smita believes him, and she also reveals she is the girl he once protected from her father. She protects him and fights for him in court.

As he says it himself, he was lucky, but luck had nothing to do with it.

Poverty: All that Ram knows, was learned from experience. He never went to school or got any diplomas. The poverty that he has lived through has also taught him a lot. While he was trying to survive, he learned things that helped him get win the money in the television show. Also, a lot of what Ram describes really gets to you, because you know that the story is based on real events. In the story there are a lot of details about crime and prostitutes and in India, when you are poor, the police does not do as much for you as when you are rich.

Love: Eventually, Ram meets a prostitute and he falls in love with her. She loves him back, but she cannot leave her profession, because her brother, whom is also her pimp, keeps an eye on her. Ram goes to him, and asks him if he can take Nita with him. Her brother tells him he can, if he can pay him the dept. Of course, Ram cannot. Eventually, Ram steals from his boss so he can pay the dept. But as he has the money, he is called to the hospital. There he finds Nita, and she was beaten up by one of her customers. He looks at her and sees her wounds and he recognizes the cigarette burns on her body, because he has seen similar wounds on Neelima Kumari’s chest. Then the plan to get the man who did this back starts. Ram tries to enter the television show, and he succeeds. He actually never tried to win. He just wanted some revenge on Prem Kumar, the host of the quiz. But when he does win, he can pay Nita’s brother to get her freedom.

Luck: A lot of what Ram achieved, he would never have without luck. He was lucky that all the questions he got he knew. Furthermore, he does not really know much. He cannot read or count. Ram also has a lucky coin that he uses a lot to solve his problems. At the end of the book you find out that both of the sides of the coin are heads. As Ram says: ‘It’s my lucky coin. But as I said, luck has got nothing to do with it.’

Ram Mohammed Thomas: Main character of the book. He grew up an orphan, and he was taken in by a priest, but because the priest does not know what religion Ram’s parent believed in, the priest gave him three names, all the religions in one. Ram does not like his life a lot, and he has been through a lot. His main drive in the book is to marry Nita, and he succeeds.

Salim Ilyasi: This is Ram’s best friend. They met each other when they were young, and Ram, who is two years older, has always looked out for him. Salim is very optimistic and he wants to be a Bollywood actor.

Nita: She is the prostitute that Ram meets and falls in love with. She gets beaten up by Prem Kumar, and ends up in the hospital. She tells Ram not to call her beautiful, because that is what got her into prostitution. In the end, she gets her freedom and marries Ram.

Prem Kumar: He is the quiz master of ‘Who Will Win A Billion’. All along Prem tries to make Ram look bad and he wants to make sure Ram loses. At the end of the book it is learned that Prem is the one that tortured Neelima and Nita. At the very end, you find out he has committed suicide, but Ram believes the show’s producers have something to do with it.

Smita Shah: She is Ram’s lawyer. He tells Smita the whole story, and Smita believes him, because she is a part of one of them. Ram saved her from her abusive father ones, and one of the questions that he knew the answer to, he got from her father.

There are a lot of other people who are not that important for the story, but of course also are, because without them, Ram would not have been able to answer all those questions.

It all ends well for Ram. He gets together with the girl he loves, and he gets back a friendship that is so close that he calls Smita his sister. But most of all, he gets back his freedom. And that is a thing Ram has not had in a long time. Now that he has money, and he is happy, he really is free. He even gets rid of his lucky coin because, as he says: ‘Luck comes from within.’

The whole book is set in India. A lot of it is in Mumbai, and a smaller part is around trains. Ram decides to leave his city, because he thinks he killed the father of Smita.

Mumbai is a great part of the book and it is very important for the story, because nowhere on the world there are slums like these. But what is most important about it, is that all of this is in India. A culture like that is nowhere else to be found.

The book was written from Ram’s point of view. That makes that the reader really engages in the story. Because it is written from his point of view, you know everything already, and you do believe him. Everything he goes through feels very hard, because he is, yet again experiencing it. Plus, it is very important that he gets Smita and the police to believe him, and as the reader you want the same. While the story happens in a different country I could not believe scenes like that could really happen in this world in this time.

The thing I did not like about the book, was that it was hard to identify with any of the characters, because they lead such different lives. Also, I did not really find round characters. Ram changed and because it was written from his point of view, you knew what he was going through and how it changed him. But the rest of the people did not really change or show internal conflict, other than the one that showed nothing but that (Neelima Kumari).

That said, I really liked the book. It shows a lot of the Indian culture and it paints a beautiful picture. I started to love Ram, and I think that is great in a book, when you start hoping it will all work out for the main character.

If I were to recommend this book to someone else, I would say that it is important to read a book like this, because there are a lot of things in the book, like culture differences, that you would never read about in other books. There are scenes in the book that are painful, or scenes that you wish you had never read. But at the end, you are glad you read the book and did not watch the movie, because it is very different, and some crucial pieces were left out.

In the movie, or as I read, because I did not see it, changed the name of the main character, and I do not know why. They also changed Nita’s name, and made her a girl Ram (or should I say Jamal?) already knows since his youth. Also, they made Ram and Salim brothers.

When I hear all those changes, I do not understand why you would changes thing like that, and if they did, what more did they change? Therefor I am happy I read the book and not the film and I would recommend that to everyone.