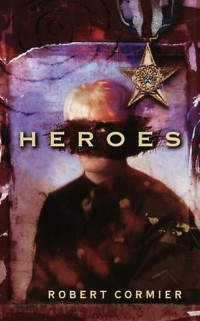 Meld je aan!
This book was written by Robert Cormier.

Francis Joseph Casavant is an eighteen years old boy. He was seriously injured of his face when he fell on a grenade in France during the Second World War. He hasn¡¦t ears or a nose anymore. At the beginning he didn¡¦t wear the bandage and the scarf, because however, a lot of people looked at him and tried to avoid him, Francis started covering his face.
After the war Francis returned to his hometown Frenchtown to take revenge on Larry Lasalle, who raped Nicole, his ex-girlfriend.

Francis was in distress about this, because he trusted Larry and liked him.
Larry passed himself as a nice guy who tried to help children. It was shocking to realize that he was a paedophile.
Larry destroyed the relationship between Nicole and Francis and he poisoned their lives. Nicole thought namely Francis was also guilty of the rape, because at some moment Larry asked Francis to leave so he and Nicole could dance together. Nicole asked Francis to stay but he went outside and waited for her in the hallway.
That was a little bit stupid from Francis, but I believe that Francis really didn¡¦t know that Larry wanted to abuse Nicole.
Francis came back to Frenchtown to because he looked for Nicole. But while Francis was fighting in the war, Nicole left Frenchtown.
Then Francis stayed in Frenchtown and one day Francis heard Larry was back in town and Francis was going to searched for him. Francis wanted to kill Larry, because of what he had done. When he found Larry he asked him why he abused Nicole. Larry answered that he was a paedophile, than Francis took his gun to shoot him. But then Larry took his gun also. And my English teacher is a big loser. He said to Francis: go home. I think that the anger of Larry was drastic. I think personally there are no reasons to kill people. When Francis left, Larry committed suicide. Francis discovered that Nicole was stayed in a nunnery. He went to the nunnery to meet her, but Nicole leaved. Francis got the new address of Nicole and went to search for her. When he found her, she was in the final year on Sint Anne Academy. Nicole and Francis had there a conversation, but it was different from then before. Francis knew the relation between then was changed and he decided to go home. Francis knows that they¡¦ll never see each other again.
Francis was going to write about the heroes he met during the war: what Nicole always told him to do