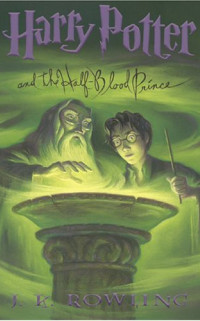 Opinion:
I really enjoyed this book, just like the other books of Harry Potter. I’m looking forward to the next part of the story.
Many things were exciting and made me curious. For example: Draco Malfoy spending a lot of time in the Room of Requirements and the betrayal of Snape.
The death of Dumbledore was very sad, because (especially in this book) he was very important to Harry.


Summary:
Everybody believes that Voldemort (He Who Must Not Be Named) is back. There also are speculations about the fact that Harry could be the Chosen One.
Harry is waiting for Dumbledore to collect him. He will take Harry to the Burrow. There he will spend the rest of his holiday. The Hogwarts headmaster asked Harry for a favour. He wants Harry to persuade Slughorn to start teaching again. At the Burrow Harry meets Ron and Hermione. He tells them about the prophecy, which says that either Harry or Voldemort will have to die, because they can’t exist together. The same day, they receive the results of their O.W.L.’s. Harry wants to become an Auror, but Snape doesn’t want him to continue doing Potions. They went to Diagon Alley to get their books and all the other supplies for next year at Hogwarts. They also visit Fred and George, who have started a joke-shop. Draco Malfoy and his mother are also at Diagon Alley. Harry, Ron and Hermione decide to follow him. Hermione thinks that Harry should forget about him, because she thinks he’s not up to something.
At Hogwarts, Snape became teacher Defence against the Dark Arts. Slughorn started teaching Potions, and gives Harry permission to study it. He gives Harry a book and ingredients for his lessons. In the book, someone who called himself the Half-Blood Prince, has written all kind of notes. In the first Potion lesson, Harry followed the instructions of the previous owner of the book. Slughorn gives Harry a bottle of Felix Felicis, a potion that gives you luck, because Harry did very well in the first lesson.
Dumbledore gives Harry private lessons. The headmaster tells more about Voldemort, and his past. He shows him several memories about He Who Must Not Be Named.
Harry, Ron and Hermione didn’t continued Care of Magical Creatures. They tell Hagrid about it, but he doesn’t seems to be very pleased with their decision.
Someone tries to send a cursed necklace into Hogwarts. The attempt fails, and a student gets injured, because of touching the dark artefact. Harry suspects Draco Malfoy.
Professor Slughorn gives a party. Harry follows Snape and Draco, when they’re leaving. He hears them talking. Draco is supposed to complete a task, but he doesn’t want Snape to help him with it. Snape tells him, that he made an Unbreakable Vow to the mother of Draco.

Harry stays at the Burrow while Christmas. They get an unexpected visit from Percy and the new Minister of Magic, Rufus Scrimgeour.
After Christmas, they go back to Hogwarts. Dumbledore wants Harry to get a memory from Slughorn. Harry is trying to find out what Draco is up to. He asks Dobby and Kreacher, to tail Draco. Kreacher is the house-elf of Harry. They tell Harry, that Draco often goes to the Room of Requirements.
Harry took a bit of his Felix Felicis to get the memory of Slughorn. The memory shows Slughorn telling to the young Voldemort about Horcruxes. A Horcrux is an ordinary object, which contains a piece of the soul of a wizard. Voldemort has made another six Horcruxes, which make him immortal. Dumbledore tells Harry that he already destroyed a Horcrux. The headmaster promised Harry, that he could join him if he finds another.
Dumbledore asks Harry to come with him to destroy another Horcrux on the day Draco wants to finish his task. Harry gives his friends the Felix Felicis and tells them to keep an eye on Draco and Snape.
In a cave, miles away from the school, Harry and Dumbledore search for a Horcrux. While getting it, the headmaster gets weakened a lot.
They return to Hogwarts, when a Dark Mark appeared in the sky. They reach the entrance of the school, when Dumbledore puts a spell on Harry, so he can’t move. Draco Malfoy appears, and disarms the headmaster. Draco is supposed to kill Dumbledore, but he doesn’t dare. After a while, Snape arrives, and kills Dumbledore. The Death Eaters inside the school are fighting against some teachers, a few Aurors and Harry’s friends. Harry goes after Draco and Snape. Snape screamed to Harry that he’s the Half-Blood Prince. Snape knew he had his book, because of the spell that Harry used against Draco and Snape. They both escaped.
People were speculating that Hogwarts might close. Dumbledore had his funeral near the school. Harry knows his task; find the remaining Horcruxes, destroy them, and finally destroy Voldemort himself.

Characters:
Harry Potter:
Together with Dumbledore he tries to kill Voldemort. Harry is the most feared enemy of the Dark Lord. His best friends are Ron and Hermione. Harry likes to play Quidditch. This year he becomes captain of his team. Harry is very adventurous and convinced to kill Voldemort.

Ron and Hermione:
They are Harry’s best friends. Harry tells them everything about the private lessons with Dumbledore. Ron is a bit afraid and Hermione very malignant.

Voldemort:
He is the enemy of Harry, and fears him. Voldemort is immortal (because of his Horcruxes) and want to kill Harry himself. The Dark Lord gets supported by the Death Eaters, Snape is one of those Death Eaters.

Draco Malfoy:
He tried to kill Dumbledore. This year, he failed two earlier attempts to kill the headmaster. He injured two students with these attempts. At the end, he wasn’t able to kill Dumbledore. Draco is very sly and because of the things he did, you can guess that he’s on the side of Voldemort.

Professor Snape:
Because of the Unbreakable Vow, he has to protect and help Draco in his task. Snape is teacher Defence against the Dark Arts after he taught Potions last year. He makes Harry’s life as miserable as he can. Snape is on the side of Voldemort.

Professor Dumbledore:
He gives private lessons to Harry. The headmaster told him about Voldemort and how to kill him. Dumbledore is very kind and helps Harry to kill the Dark Lord. In the end of the story, he is betrayed by Snape.

Time:
The story takes place in the present time, because Harry drove in a Ford Anglia (Harry Potter and the Chamber of Secrets)

Settings:
Harry is at Hogwarts most of the time. He also had been at a few other spots, like the Burrow, Hogsmeade and the cave where the Horcrux of Voldemort is kept.

Perspective:
In the beginning you look through the eyes of the Prime Minister. The book contains much conversations, thoughts of Harry and information about the things that happen. There isn’t much detailed information about how things or people look like.

Structure:
The story is told chronologically. It contains several flashbacks, when Dumbledore shows memories to Harry. The story also contains a few references to the previous books.

Theme:
The theme is the battle between good (Harry Potter) and bad (Voldemort). Harry finally discovered how he can beat Voldemort, by destroying the Horcruxes.
Professor Snape is the Half-Blood Prince. Snape betrayed Harry and Dumbledore and is on the bad side of Voldemort.