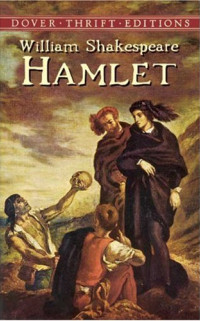 Luister nu!
1. Title: “Hamlet”
2. Author: William Shakespeare
3. Probably written in 1601 or 1602.
4. 179 pages
5. The story takes place in Denmark in the Elsinore Castle. The events happen at the same time as the book was written.
6. A few weeks pass by in this book.
7. The leading character in the book is self-evidently Hamlet: the character of Hamlet dominates Shakespeare's tragedy of the same name, yet Hamlet at the start of the play is not a commanding figure. Indeed, when we first see the Prince, his posture is defensive, Hamlet taking a passive, if resentful, stance toward the events that have befallen him. Slow to the conviction that the ghost is his dead father and that Claudius is guilty of regicide, Hamlet does not go straight to the task at hand. Eventually he kills Claudius, but Hamlet delayed murdering Claudius for a long time.
8. Yes, Shakespeare wants to draw the readers attention to the following problems or subjects: the relationship between father and son and mother and son, between lovers (Hamlet and Ophelia for example) or friends (Hamlet and Horatio), madness (played madness, but also true madness), taking revenge at an evil person and some existentialistic questions (“To be or not to be”: in this famous soliloquy Hamlet is often thought to be dallying with the purpose of suicide as a means of escape from his duty. But this view overlooks the facts of the situation and does violence to Hamlet’s own words. He has formed his plan to make the King betray himself and is eager to try the crucial experiment. Meanwhile there is a wearisome interval in which he can do nothing but wait for nightfall. Inaction brings depression of spirits, and the thoughts at such moments, and to all men – as to Hamlet – they lead to the further reflection that every one has the power of life or death in his own hands. You can translate the question to: “Is it nobler to live miserably or to end one’s troubles by a single stroke?” The answer, he says, would be obvious if death were only a sleep. The whole course of his argument is general, not personal: he is not suffering from the scorn of the world, the law’s delay or the insolence of office.).

9. The story is chronological.
10. The most important event in the book is when a ghost, Hamlet’s dead father, appears to Hamlet. His father tells Hamlet by whom he’s murdered and that Hamlet has to take revenge to that murder. That murder is Claudius, King of Denmark, who has married Hamlet’s mother, Gertrude, after killing Hamlet’s father.
11. I felt sympathy and antipathy at the same time: it’s of course terrible what happened to Hamlet, but I would never kill someone, even if someone I loved was killed. But on the other hand it’s very easy to say this, because I never experienced it myself. Maybe I would judge differently then.
12. This book was more difficult to read than the books I already had read for English. That’s because this book was written in the Renaissance: the language they spoke in the Renaissance was different than the language in which they’re know speaking in England.
13. The title is “Hamlet”. Hamlet is the leading character: the whole book is about him and the things he does etc.
14. If you’re having CKV3 as subject it’s very clever and skilful to read this book, because you also augment your knowledge about theatre history. And even if you’re not having CKV3 as subject, it can be very nice to read this book: you probably have to force yourself to read the book through, but once you’re in the story, it’s a very exciting story about power, murder and madness.
15. Hamlet's father, the King of Denmark, is dead and has been succeeded by his brother Claudius, who has married the old king's wife, Gertrude. The King's ghost tells Hamlet that Claudius murdered him, and makes Hamlet promise to avenge his death. The play traces the process by which Hamlet negotiates the conflict between his need to take violent action and his uncertainty about the rightness of doing so. He pretends to be mad and contemplates suicide. He unintentionally murders Polonius, the new King's counsellor, and violently confronts his mother for what he sees as an unfaithful and incestuous marriage to her brother-in-law. He also verbally abuses Ophelia, the daughter of Polonius, whom Hamlet had loved before, contributing to her mental illness and eventual death. Hamlet finally decides that he must submit to his fate - or his dramatically determined role as the hero of a revenge tragedy - and agrees to a fencing match with Ophelia's brother, Laertes. Arranged by Claudius, the match is rigged. Laertes's rapier is poisoned, and both Laertes and Hamlet are killed with it. Gertrude drinks the poisoned wine intended for Hamlet and dies. Hamlet's last action is to kill Claudius, but whether this counts as the successful culmination of a revenge plot is dubious. As a new order takes over in Denmark, and as the dying Hamlet asks that his story be remembered, we realize that his existential quandaries remain largely unresolved.