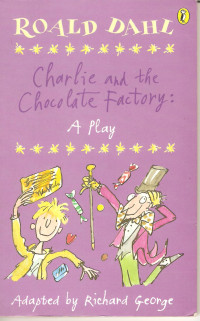 Charlie and the Chocolate Factory

Title: Charlie and the Chocolate Factory

I had never read this book before, but I heard that it was very funny and amusing to read it. And it was! There happen lot of crazy things in the factory, it’s a very imaginative story.

Charlie is a thin, poor boy. He lives with his family – Mr. and Mrs. Bucket (his parents), grandpa Joe, grandma Josephine, grandpa George and grandma Georgina – in a small wooden cottage on the edge of a great town. Charlie adores chocolate, and every time when Charlie goes to school, he walks past Willy Wonka’s Chocolate Factory.

When Willy Wonka announces that he will hide five golden tickets in chocolate bars by which you can get in the factory, Charlie dreams about get a ticket. But once a year he receives a chocolate bar, when his birthday is. So there is a very little chance, but Charlie still hopes.

Then the first two tickets are found. The first lucky finder is a boy, called Augustus Gloop, an enormously fat boy whose hobby is eating. The second lucky finder is a girl, called Veruca Salt, a spoiled-rotten brat whose parents are wrapped around her little finger.

On Charlie’s birthday, Charlie gets the long-expected chocolate bar, everyone is curious. But there isn’t a golden ticket in it. He is very sad, but it was foreseeable.

Then the third and the fourth ticket are found by Violet Beauregarde – a dim-witted gum-chewer with the fastest jaws around – and Mike Teavee – a toy pistol-totting gangster-in-training who is obsessed with television.

At once, Charlie finds a dollar bill, and he buys two chocolate bars. And in the latter, there is a golden ticket! Charlie can go to the chocolate factory on the first of February!

Charlie takes Grandpa Joe – who also likes the Chocolate Factory – with him. They meet the others and Mr. Wonka – an extraordinary little man – and they can go in.

First they go to a tremendous waterfall, existing of chocolate. There they see little men who aren’t higher than their knees. It are Oompa Loompa’s, they work for Mr. Wonka. Then Augustus Gloop falls in the river of chocolate, he was too greedy! He goes up in a pipe, his parents and a few Oompa Loompa’s are going to save him. The others continue.

They sail by a big pink boat to the Inventing Room. Mr. Wonka has invented a meal-gum, it isn’t quite right. But Violet picks the gum and eats it! When she is chewing the dessert, she becomes blue and blown up! Her parents and some Oompa Loompa’s go to the Juice Room to squeeze Violet. The others continue.

They travel by The Great Glass Elevator – this isn’t an ordinary up-and-down elevator, it can also sideways and longways etc. – to the Television-Chocolate Room. There is a machine that can split a chocolate bar in millions of pieces and sent it to the TV, and then you can take it from the TV. But Mike Teavee stand in front of the machine, and is sent by TV. When his mum takes him, he is very small. His parents and a few Oompa Loompa’s are going to stretch him in the stretch machine.

Only Charlie left. He, Grandpa Joe and Mr. Wonka go with the elevator through the roof of the factory, and fly to Charlie’s house! Everyone goes in the elevator, they can live inside the factory! And Mr Wonka says that as soon as Charlie is old enough, he can run the entire Chocolate Factory!

Title: It’s an appropriate title, because the whole story is about Charlie whose in the Chocolate Factory.

Charlie Bucket: He is about nine years old. He is a kind, brave, true and good boy. He is the hero of the story.

Willie Wonka: He is the directory of the Chocolate Factory. He wears a plum-colored tail and green trousers, and he has a black top hat on his head.

2. Write a different ending to the story.

Charlie and Mr. Wonka lift the bed with the grandparents into the elevator. ‘Save me!’ cried grandma Josephine ‘We’re gonna die!’ But Mr Wonka and Charlie trolerate no resistance. The elevator takes off. With an enormous speed they fly into the air. But suddenly Charlie hears a creak. ‘What’s that strange sound, did you hear that too?’ Charlie asked. ‘There is that creak again!’ Then screams Grandpa George: ‘I know what that sound is, the bottom of the elevator is breaking down!’ ‘Oh no!’ they cried in unison. Then suddenly the bed with the grandparents falls down, and Mr. Wonka falls too. Charlie can grasp to an edge, he sees his family and Mr. Wonka falling down. He think they will all die, and he lets himself loose. So died the small but brave Charlie Bucket.