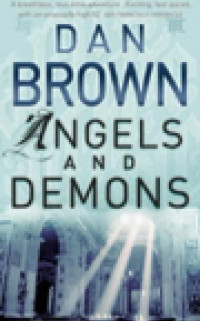 Meld je aan!
Title: Angels and Demons
Author: Dan Brown
Book Review: Angels and Demons
Factual information
Angels and demons, Robert Langdon’s first adventure, 569 pages. Extra: Before THE DA VINCI CODE was broken, the world lay at the mercy of ANGELS AND DEMONS.
Published by Pocket Books, a division of Simon & Schuster Inc., in 2000, New York.
“For Blythe…” (his wife)
Dan Brown, author of Digital Fortress, Angels and Demons, Deception Point and The Da Vinci Code. He lives in New England. Dan Brown is a graduate of Amherst College and Phillips Exeter Academy, where he spent his time as an English teacher. His wife Blythe is an art historian and painter, and she helps him with his research.
The cover of the book shows the Saint Peter’s Basilica (designed by Ric Ergenbert) and an image of a man running (designed by Thomas Hoeffegen)

Genre, subgenre
The book is a thriller, with a big influence of art and history
Outline:
The Catholic priest Leonardo Vetra has a dream: he wants to end the endless discussions between religion (The Catholic Church) and science, by removing the differences (like the creation of the universe). Vetra is also physicist at Switzerland’s well-known Conseil Européen pour la Recherche Nucléaire (CERN). Recently, he has discovered how to produce antimatter. This is a very important discovery because antimatter is produced out of nothing. Pure energy is transformed into antimatter. With this theory, he can proof that the church was right when they say that God created something out of nothing (“let there be light”). Before he can announce his findings, Vetra is found murdered, and his chest is branded with the word Illuminati, and one of his eyes is cut out of his head.
CERN’s director, Max Kohler, tries to keep the knowledge of Vetra’s death from the media, but wants to know the significance of the brand and the missing eye. Kohler finds that a Harvard professor, Robert Langdon, is considered to be the world’s authority on symbology. Kohler has Langdon flown to CERN’s headquarters so he can question him. While Langdon is at
CERN, Vetra’s daughter, Vittoria Vetra, returns from a trip. Informed of her father’s death, Vittoria feels pushed to explain the dilemma her father faced with his discovery. Vetra had realized that although antimatter was a potentially cheap energy source, its improper use could lead to mass destruction, like nuclear energy now. Vittoria discovers that the large sample of antimatter has been stolen. A message left by a member of the Illuminati (an ancient secret brotherhood that fights against the Church) claims to have deposited the sample somewhere within Vatican City, where the cardinals have recently gathered to select a new pope. Vittoria explains that it is necessary that the stolen antimatter is recovered within a day to avoid detonation, because the batteries of the canister (in what the antimatter is stored) only last for 24 hours. From now on, the race has started. Langdon and Vittoria try to find the canister by finding the man who placed it. They find him by following the “path of the Illumination”, a secret path made out of 4 statues (the “altars of science”) that point out the direction. Each statue represents one of the four elements air, water, fire and earth. But the Illuminati terrorist doesn’t stop after one act: every hour, starting at 8 o’ clock, one of the four preferiti (the favourites between the cardinals to be elected as pope) is killed under a statue on the path of illumination. From now on, they not only have to find the antimatter, but they also need to thwart the murders. They don’t succeed in stopping the murders, but in the end, they find the Illuminati lair, where the terrorist is hiding. They kill him. Afterwards, they go back to the Vatican. The camerlengo knows suddenly where it is, but when they have it, it’s too late to bring it to CERN. The camerlengo and Robert then go into a Helicopter chopper, and fly as high as they can. They let the chopper go higher, and they both jump out of it. Langdon survives, and on the ground he and Vittoria discover the truth about the whole situation. It appears that the camerlengo has been the task maker for the terrorist, and that he has set up the whole plan. The camerlengo, once he finds out that the truth has come out, burns himself on top of St. Peters Cathedral. After all these events, we go to a new day, later. A new pope is elected, and Robert and Vittoria have survived all the horror, and enjoy a vacation in Rome.
Construction
The book is divided in chapters, and with almost every chapter change, the author changes of protagonist. E.g. in the first chapter, the protagonist is Robert Langdon, a Harvard professor, but in chapter 3 the protagonist is the hassasin (the terrorist). There are no flashbacks, but from time to time, because the protagonist changes, the reader gets to know more than the overall protagonist Robert Langdon.