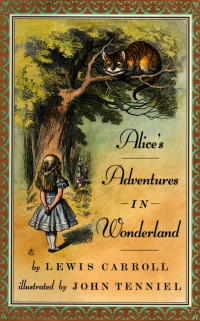 Explanation of the title: the story is about Alice who falls in a rabbit-hole that goes to Wonderland. Alice had a lot of adventures there. That’s why the title is Alice’s adventures in Wonderland.


Where is the story set?


When is the story set?

Alice: is a little girl who’s seven years old. She has a lot of imagination and likes to be active. She has a cat, which she frequently talks about and an older sister, who she is with in the beginning and the end of the book. She has a cat that is named Dinah she tells a lot about him.

The White Rabbit: He doesn’t exactly talk to Alice that much, but wherever Alice goes, she almost always sees him there. He is a very stressed person and forgets a lot of things because he is in a hurry. He works for the queen and he talks very fast.

The Mouse, the Dodo, the Duck, the Lory and the Eaglet: Alice meet them in the pool of tears.

The Caterpillar: a unfriendly caterpillar who gives Alice the possibility to change her size when she wants to grow or shrink. He smoked on a hookah, a strange sort of waterpipe.

The Duchess: very ugly. She is pretty nice and friendly if she isn’t near too much pepper. She believes that everything has a moral.

The Queen of Hearts: a nasty savage queen always issuing orders such as ‘off with his/her head’.

The Cheshire cat: the Duchess’s perpetually grinning cat with the ability to appear and disappear at will.

The Mad Hatter: a rather rude character who continually has tea because for him it’s always six o’clock.

The March hare: the Mad Hatter’s friend, who lives in a house shaped like a hare and is just as rude as the Hatter.

The King of Hearts: he is much kinder than his wife.

The Gryphon: the Queen’s servant who takes Alice to meet the Mock Turtle.

The Mock Turtle: a friendly but very sad and over-sentimental creature, who tells Alice about his schooldays.

Alice sat with her sister in the garden. She was een bit sleepy. Suddently she saw a rabit at her feet who began to talk and ran away. Alice ran after the rabit, which had run into a big rabit-hole. Alice crawled after it.but Alice didn’t think about how to going back. then Alice fell on something soft. She came into a room with a big table with a key on it. All around there were doors. She tried to open the doors but it doesn’t fits. Then she tried a little door. The key fit. Behind the door there was a beautyfull garden, but Alice was to big for the door. On the table behind her stood a little bottle who said: ‘Drink me’. Alice drink from the bottle suddently she shrank. Now she fit true the door, but she is forgotten the key which is on the table. Alice began to cry, when she saw suddently a piece of cake lieing on the floor which said: ‘Eat me’. Alice grow and came with her head against the roof. When she cried agian. She made a pool off tears. Alice took the key. And drink from the bottle so she shrank. But then she stuck in the pool of her own tears. In the pool off tears she saw a mouse swimming. Alice began to talk tot he Mouse about her cat Dinah. But the mouse didn’t like that so he swims away. She follows the mouse outwards, where she mets a lot of animals. Like the Dodo who would start a game to get Alice warm because she had it cold. After doing something for the rabit. She saw after the house of the rabit a Caterpillar on a mushroom. Who said to Alice: ‘ifyou stood on one side of the mushroom you growing bigger and on the other side you shrank smaller. And i he goes away. Alice tried both sides off the mushroom. And it works she was growing bigger. She would go into a house. When she was in the house she was in the kitchen of it. The duchess sat in the middle of the room with a baby (op schoot) and there was a cat who was smiling to her. The baby was crying the whole time. Alice ask the duchess why the cat was smiling. It’s a Cheshire cat she said. Alice said tot he duchess that cat cant smile. All cats can smile said the duchess. Now alice was angry, she said to the duchess i have a cat that can’t smile. Than you don’t know very much said the duchess. Alice was now so angry that she goes outwards the house. And choose a side to walk to. Later she saw a little house and goes in it. In it she saw the dormouse, the hatter and th marche hare. Also her follows a little talk with Alice. Out of the conversation revealed that it always was tea-time.  A bit later Alice went out agian. When she was outside she saw a tree with a door she did go true it. then she came in a beautifull garden. All the people where playing cards. Seven, five and two where working they draw the white roses into red roses. Alice asked them why they did that the answer was: ‘otherwise, the queen says offwith the head’. There cames the queen and she was angry and says:’of with them head’. After that she began to talk with alice. She asked alice if she want to play croquet with her alice said yes. When te game starts Alice didn’t know how to play the game. She saw the Chershire Cat again but this time only his head. He had agian a strange smile on his face. She talked with him and there where coming more people-cards. The queen said:’of with his head’. Alice had er genoeg van om klein te zijn en nam wat van het eten dat ze in haar zak had zitten: ze groeide, steeds groter. Tot ze ongeveer 2 huizen groot was. Ze had een grote mond tegen de kaarten dus die vielen haar aan. Haar zus zei: ”Alice wakker worden!” Het was allemaal maar een droom.