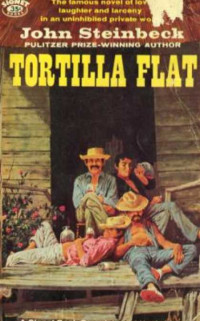 Every day, Jesus Maria goes to the post office. One day, he saw a young man with a baby and a police-officer. The baby is sick and Jesus Maria told the police-officer the boy is a friend of him and he will take care of him. Jesus Maria and the boy, he’s only sixteen years old, went to Danny’s house with the baby. There, they kept the baby warm and the boy told them he’s a Mexican. After a short time the baby dies. The boy will go back to Mexico.
Every afternoon, the Pirate put his quarter in the bag with the other quarters but one day, the bag is gone. Big Joe has stolen it. The friends are very angry at him and hit him. Big Joe tells the friends where he left the bag and they catch it.
In the bag there are over a thousand quarters, the time has come, the Pirate can buy the gold candle-stick for the church. The next week the gold candle-stick was in the church.
In Monterey in Tortilla Flat every day is the same. When Danny got out of his bed one night, he was thinking about his freedom, before he lived in Tortilla Flat. One night, Danny ran away. His friends thought he was with a girl, but after a week they still had no sign of Danny and they began to worry. Every day they looked for him and every time they came home, there was something gone. Danny had stolen it.
A fisherman saw Danny and he told the friends Danny wanted to fight everybody and broke some windows, so a police-officer took him to jail.
Then, the friends went to Torrelli. He said Danny was there, but Torrelli has no good word about him.
The next day Johnny Pom-pom came to the friends and told them Danny escaped out of jail. He also told them he had a lot of money. Then Torrelli came in and told the friends, they can’t live anymore in Tortilla Flat, because Danny sold him the house for twenty-five dollars that night. And he has a proof for it: A paper where Danny signed. But the friends know it’s a lie, so they catch the paper. Torrelli is very angry.
Suddenly, Danny and Tito Ralph, an ex-jailer, walked in the gate. When Danny was home for a few days, the friends remarked he’s changed. The friends decided to give a big party for Danny. Everybody in Tortilla Flat came, even Torrelli. Danny doesn’t like the party, so he went away. Pilon and Pablo found him by the pier. They walked back to the party and after a while Danny wanted to fight with everybody, but nobody in the house would also fight, so Danny went away again. The friends and the other people walked after Danny, when they heard a cry. Pilon found him at the bottom of the gulch. He fell forty feet. Father Ramon and the doctors came and they brought him home. Danny was dead.
Two days later the friends sat together. The funeral was the next day, but none of the men had a suit. They decided to lie in the grass, so nobody could see that they didn’t wear a suit. The funeral was the next day. After the funeral, the friends went home. Then, Tito Ralph came with some cigars. When he lighted his cigar, the little burning landed on an old newspaper, and in no time the house was on fire. After the fire, the friends walked away, and no two walked together.

Author:
John Steinbeck was born in Salinas, California, on February 27, 1902. After graduating from Salinas High School in 1919, Steinbeck went to the Stanford University. During this time he worked periodically at various jobs and left Stanford permanently for his writing career in New York. He was not successful and finally he moved to California.
In 1930, Steinbeck married his first wife, Carol Henning. They lived in Pacific Grove where much of the material for Tortilla Flat is based on. Tortilla Flat was the turning point in Steinbeck’s career. It received the California Commonwealth Club’s Gold Medal for best novel by a Californian author
John Steinbeck died December 20, 1968 in New York City.

Theme:
The theme of the story is friendship and comradeship. There are six fiends living in one house,  Danny's house. Before they lived together, some of them didn't knew each other, like Jesus Maria. Pilon and Pablo saw he was not in good circumstances, so they took him to their house. Danny is the talisman of the group and when he died, the friends ‘died’. The house where they lived was burned and each fiends departed alone. There is no group without Danny.

Danny: He’s the main character of the story. Danny is the talisman of the group. He’s a paisano. A paisano is someone who live in old wooden houses and they are clean of commercialism, free of the complicated systems of America and they have nothing that can be stolen.
Danny grew up in Tortilla Flat, because his grandfather owned two small houses, but when he died Danny got the two houses. In the meanwhile Danny was in the army, together with Pilon and Big Joe Portagee.
Danny is a man you can trust and who is loved by every woman in Tortilla Flat.
At the end of the story Danny dies.

Pilon: He is the second man who lived with Danny. First he rent the other house from him, but when the house was burned, he lived with Danny.
Pilon was also in the army.
Pilon is the only person in Tortilla Flat, who knows everything the Pirate did.

Pablo: Pablo is the third person who lived with Danny. Pablo is an old friend of Pilon and when he met Pablo, he thought he was in jail. Pablo has no roof over his head and he always sleep in ditches. Then, Pilon asked him to live with him and he will.

Jesus Maria: Pilon and Pablo found Jesus Maria lying in the bushes with a gallon of wine, and they thought he was dead, but he wasn’t. He was only drunk. He also had no roof over his head, so he also went to live with the other men.