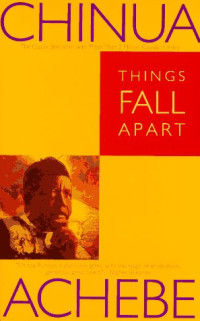 Meld je aan!
Summary
The main character of the book is Okonkwo. He is a very important man in the village Umuofia. He isn’t afraid of blood or fighting.

Okonkwo lived in a small village called Iguedo, in the district of Umuofia. He first became famous when he was a young man. At eighteen years old, he was the best wrestler of Umiofia. He had a very lazy father, Unoka, when he had some money he always spent it on lots of palm wine. On one day there was a woman killed by some men from the village Mbaino. The people in Umuofia had a meeting because of that. They decided to send Okonkwo. He gives them 2 possibilities 1. Give one young man and one young woman 2. Go in war with Umuofia. They had chosen to give a young man and a young woman because Umuofia was strong. The young man Ikemefuna lived by Okonkwo and the young woman became the new wife of the man whose wife was killed. Okonkwo had beaten one of his wifes in the weak of peace so he was punished for that crime. Ikemefuna liked it there and called Okonkwo dad so the oracle told the people to kill him and that Okonkwo may not kill Ikemefuna by himself. But Okonkwo did kill him. On one day there was some one dead and it was an important person. Okonkwo danced like everyone else with his gun. He shoots someone and he has to go for 7 years. He went to his mother’s village and lived there fore those 7 years. During those 7 years there came a white man with a new religion. People became converts and they became Christians. Okonkwo and the others don’t like the new religion. When he came back in his own village there was also the new religion. They also build a church. One of the Christians killed a holly snake. That is a very famous snake so they punished him and the other Christians. They burnt the house of the killer and they burnt the snake. 6 leaders of Umuofia had to come to the white man and they were put in prison. The people in the village had to pay 200 bags of cowrie shells. When they paid it he will let them go. When they paid it the next morning they had a meeting. Two messengers came to that meeting and okonkwo killed one. After that he killed himself else they would do it.