The woman who walked into doors door Roddy Doyle 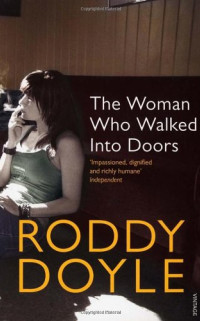 The maincharacter is Paula O’leary. She has been married to Charlo Spencer. They have 4 children; Nicola (18), Jonh-Paul (16), Leanne (12) and Jack (5). They live in Dublin. The story begins when a guard comes to the house to tell Paula that her husband has been shot by a police officer. Then she starts to look back at her life. Her mother and father, Hilda and Roger, have 7 children: Carmel, Paula, Denise, Wendy, Roger, Edward and George. Wendy is dead. Paula doesn’t like her father, he doesn’t like his family. She was the slut of the school, she jerks boys under the table. She tells proud about all the boys she has had. She met Charlo when she was 17 years old. She met him in a dancing. He is very sweet and they’re really in love. After a couple of months they get married. She is pregnant of their first child, Nicola. Then Charlo starts hitting her. Paula stays with him because she thinks he still loves her, but he is also sleeping with another woman. They get 2 more children, Jonh-Paul and Leanne. Then she has a mis-carriage because Charlo is still being violent. Paula begins to drink. She becomes an alcoholic. Everytime they go to hospital, Paula makes up stories about walking into doors and falling of stairs. She wants to tell the nurses Charlo is hitting her, but she doesn’t. Meanwhile Paula has got another child, Jack. She adores him. She tries to stop drinking, but she can’t, she only drinks when Jack is in bed. One day, Paula was sitting at the kitchentable with her children. When Charlo came downstairs, she saw the hate in Charlo’s eyes when he looked at Nicola. She thought he was going to abuse her too, so she decided to kick him out of the house. She started beating Charlo with a fryingpan. Nicola helped her. Jonh-Paul saw his mother and sister beating his father, and he walks away, he never came back. Paula thinks he is living at the street. Charlo also never came back. Several years later Charlo has been shot by a policeman. He had killed a woman after kidnaping her.