The Ocean at the End of the Lane door Neil Gaiman 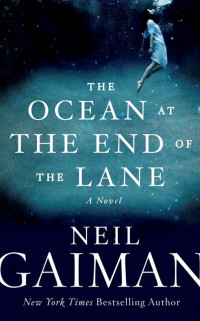 This man (we don’t know his name yet), I think it’s the funeral of his sister that day. He needs to go to her old house to see people and talk to them, but he isn’t going to. He’s driving to an old farm where an old friend used to live. She isn’t there anymore, but her mom is. And the time he spends at the farm, he remembers everything from his childhood again.

On the man’s seventh birthday no one came to his party. He played the party games all alone. His dad bought him a cat, he called it Fluffy. A month later Fluffy got run over by a taxi. The man in the taxi bought him a new cat, Monster. But monster wasn’t like Fluffy.

Every Saturday his dad would buy him a comic. But this Saturday was very special. The comic’d be in the car and the car should be on the driveway, but it wasn’t. The car stood down the lane. There was a man in the boot of the car. It was the man who gave him Monster. He went to a girls house because his dad was busy with the police. The girls and her mom said the guy killed himself. The girl took him to the ocean, which was actually just a pond.

The boy woke up choking on a coin. His little sister said she saw him throwing coins at her and her friends. He met Lettie down a tree. She told him everyone was having trouble with money. It had something to do with the dead guy

Lettie and the boy took a hazel wand to show them the way. They came to a huge rug. At least, that’s what it looked like. It had a face and spoke. But it didn’t want to tell them her name, so Lettie got angry and began to sing. After she was done singing she said they won’t see any more trouble from her.

The boy had a hole in his foot, and something in it was blocking the light. He went to the bathroom and pulled a worm out of his foot. The back looked like it had snapped off. He put a plaster over the whole, and as he was looking at himself he wondered who he actually was.

The boys mom got a new job. She would work every day, just like his dad. So his mom found someone to look after him and his sister. She was a bad person. The boy believed he took it from the place he and Lettie went to a few day before. He let go of Lettie’s hand even though she told him not to, and that’s when he brought her. It was his fault.

The next day his dad came home early. He showed Ursula (the woman who looked after him and his sister) the garden and the house. Ursula made dinner, but the boy didn’t want to eat any of it, because it was made by a monster. His dad was furious. The boy ran upstairs and locked himself in the bathroom, his father broke the door and came in. He filled the bath with ice cold water and pushed the boy down in it.

Ursula locked the boy in his room. He climbed out through the window and ran towards Lettie’s old farm. Somewhere high in the air Ursula hang and said he had to come back home. Just as Ursula was about to take him home Lettie came to safe him. Ursula wasn’t dead yet, she was only gone. They went back to the farm.

The boy’s parents were going to get him to take him home, but Ursula was still at  his house and she was going to kill him. Old Mrs. Hempstock took his pajamas and cut bits out of it. When his parents came in they had forgotten why they were angry at him. He could stay the night at the farm.

The boy woke up in Lettie’s house. As he went downstairs Lettie’s mom walked into him. She told him Lettie had gone to get things she’d need that day. When Lettie came back she and the boy went to his house. They went upstairs to see Ursula laying on the bed with grey strips of clothing hanging from the ceiling. Lettie told her she had to go, but Ursula didn’t want to, so she ran away.

They met Ursula at the lane. Lettie told her to leave, but she said Lettie had blocked the way. She picked up the boy and said he was the way back. Things came from the sky and ripped her apart, but when they were done and Ursula was gone, the things didn’t want to leave. Lettie told the boy he had to stay in the circle.

The boy was still sitting in the circle. He was waiting for Lettie to come and get him. But there were ‘things’ who wanted him to come out of the circle, so they could kill him.

Lettie came back to the circle. She was carrying a bucket with water from the ocean. They boy stepped in first, and Lettie stepped in after him. They disappeared into the water, water they could breath. When they came back up, they were standing in the pond. They had dinner.

The things coming for the boy’s heart were called Hunger Birds. The boy ran away from Lettie and her mom and grandma. The birds came after him. They knocked him down and got on top of him. A few seconds later Lettie sat on top of him, telling him not to move. Making herself a barrier between him and the birds. The birds crashed into her. Lettie’s grandma spoke with anger, and the birds stopped. Lettie’s mom carried Lettie to the ocean, laying her in the water. She wasn’t dead, she’d been given to the ocean. And one day, the ocean will give her back.

Lettie’s mom took the boy back home. When he stepped in the house he didn’t remember anything that happened that night or before.

The man woke up from his thoughts. Lettie’s grandma came and gave him a cup of tea and a sandwich. They talked about what he’d been thinking of, and if it all was real. He had to go back to his home, but he’d come back to think about Lettie.

The title of the novel is The Ocean at the End of the Lane. It’s about a pond at the end of the lane. The lane Lettie Hempstock lived on. Lettie called the pond her ocean. One night, Lettie had a bucket full of water from the pond. The boy en herself stepped in it, and when the boy opened his eyes all he saw was water. He could breath the water. When Lettie was hurt by the Hunger Birds, her mom put her in the water. There started to come waves as far as they could look. They took Lettie with her. The ocean would give her back.

The story’s set in the house the boy lives, down the lane and the Hempstock farm and ground. The story takes place in one day. The story is actually the thoughts of the man, who was in the story a boy. The whole book is one big flashback, apart from to prologue and epilogue.

The boy/man is the main character. I don’t think his name is said in the book. The boy is 7 years old in the story. He acts like he’s not afraid, but he is. He doesn’t have a good relationship with his parents or his sister. The only friend he sees in the book is Lettie.

The boy does change in the story. He becomes more brave and more mature. He doesn’t ask his parents for anything. He gets more suspiciously as well. After the things that had happened at Lettie’s house, he doesn’t trust Ursula a second when she arrives.

The story was written to amuse people. There isn’t really a message in the story. The story couldn’t happen in real life. It’s more fairy-tale-ish.