The dark half door Stephen King 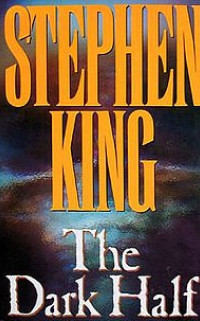 Meld je aan!
Book: The Dark Half by Stephen King
Stephen King: Stephen King was born in 1947. He now lives in Bangor, Maine, with his wife Tabitha and their 3 children Naomi, Joseph and Owen. He used to play in a rock band in high school and can still be persuaded to take the stage now and then. He had a major accident a couple of years ago, but is still writing his stories. He also wrote stories under the name Richard Bachman.

Summary: Thad Beaumont is a child of 11 years old. In this specific year, two things happened to this little kid. One of them gave shape to his life; the other thing almost killed him. Let’s start with the first thing: Thad Beaumont started writing. He wrote things he saw in his head. The second thing that happened was a trip to hospital. Thad had a bad headache for several weeks so his mother very worried and took Thad to the hospital. The father wasn’t really mister nice guy, but also went to the hospital. When Thad arrived, the doctors found out Thad had a tumor in his brains. When the doctors were cutting the tumor out, they found out that is wasn’t a tumor, but a fetus. The fetus got in his head by in uterus cannibalism, which means that when Thad was in the uterus he ate his twin brother and his twin brother somehow got absorbed in his brains. The doctors removed it and said to the parents that is was a normal brain tumor, because the father didn’t look like understanding in uterus cannibalism.

Now Thad Beaumont is an author and recovering alcoholic who’s living in the small Maine town of Ludlow (about half an hour away from Castle Rock). His own books are only moderately successful, but under the pen name George Stark, Thad writes gritty crime novels about a violent killer named Alexis Machine, which are very popular and successful. When it's learned that Thad Beaumont, who writes cerebral literary fiction, is really Stark, he and his wife Elizabeth decide to stage a daylight funeral for the fictional Stark. His epitaph at the local cemetery says it all: NOT A VERY NICE GUY. However, that is not the end of Stark and over the weeks to come he resurrects himself from his mock grave and kills, gruesomely, everyone he perceives responsible for his "death". Thad, meanwhile, is plagued by surreal nightmares and is soon visited by Sheriff Alan Pangborn, asking questions Thad can't, or doesn't want to, answer. Thad's finger and voiceprints are identical to Stark's, and Stark has left plenty of evidence at the scenes of his crimes.
Thad experiences blackouts and comes to discover that he and Stark share a mental bond. He begins to find notes from Stark written in his own handwriting. The notes tell Thad what activity Stark has been engaging in. Observing his son and daughter, Thad notes that twins share a unique bond. They can feel each other’s pain and at times appear to read the others mind. Using this as a keystone to his own situation, he begins to discover the even deeper meaning behind himself and Stark.
Pangborn eventually learns that Thad had a twin. The doctors removed the unborn brother. This leads to questions about the true nature of Stark, whether he's a malevolent spirit or Thad manifesting a multiple personality. Thad eventually vanquishes Stark, but the book ends on an unhappy note with Thad's wife having serious doubts about the future of their relationship: not only did Thad create Stark (if unintentionally) a part of him liked Stark and his bloody-minded, psychotic outlook on life.

My opinion: I think it was a good book, because I could really put myself in the book. I could make a good image of the characters in my head and I always like that in a book. The story was sort of a psycho horror story, which is one of my favorite genres.