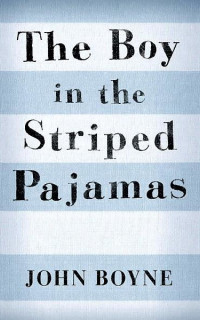 The author is John Boyne. The book is published in 2006 in Great Britain. The publisher is David Ficking Books. The book has 216 pages.

John Boyne, born at 30 April 1971, is an Irish novelist and journalist. Boyne studied at the University of Dublin and the University of Norwich. Due his time in Dublin, his first work was published. He has written eight novels for adults and four for younger readers. The novels he wrote are published in 46 languages. His best known novel is “The boy in the striped pyjamas’, this book is filmed and it released in 2008.

Bruno: Bruno is the main character in this book. He’s a nine years old boy. He’s very smart. Also he‘s the son of a commandant. He wants to do good things for others. He’s little; so many people call him ‘little man’, for example lieutenant Kottler.

Gretel: She’s the sister of Bruno and twelve years old. She thinks she knows everything better than her brother. Bruno calls her ‘hopeless case’. Gretel is in love with the eighteen years old soldier, lieutenant Kottler.

Ralf: Ralf is the father of Bruno and Gretel. He’s the new commandant of the camp ‘Auschwitz’.

The book is called ‘The boy in the striped pyjamas’. The ‘boy’ is actually Shmuel. Bruno looks out of is window, he say people in striped clothes. He thought it were pyjamas. Unfortunately the striped clothes are for the Jewish-people in ‘Auschwitz’.

The most important theme is the friendship between Bruno and Shmuel. When Bruno met Shmuel they didn’t know each other, but they become each other’s best friend. They’re talking about everything.

The book begins; Bruno comes home after school and saw that the maid, Maria, was packing is clothes. He asks his mother why. She told him they’re moving out of Berlin. His father has a new job, in ‘Auschwitz’. His father becomes the new commandant. Bruno didn’t like it in ‘Auschwitz’; it was a lot smaller then there old house in Berlin. Also he missed his friends.

Bruno is looking out of his window, he sees a fence. Behind that fence there are thousands of fathers, grandfathers and young boys. All of them are clothed in striped pyjamas. It’s a nasty-looking place. Bruno asks his sister Gretel if she knew who those people are, she didn’t.

After a time, Bruno is getting used at his new place. But he misses something. Exploring! In Berlin he was always exploring, in the garden, on the streets, in the house, everywhere. So, he wants to do that again. He walks a long end, next to the fence. He walks there for hours. He founds a boy, Shmuel. They were talking and becoming best friends.

Bruno wants to know how it’s on the other side of the fence. Shmuel said it isn’t very nice. From that day, they met every week. Bruno takes some food with him and gives it to Shmuel.

At the end; Bruno’s father told that they were going to leave ‘Auschwitz’ and go back to Berlin. But his father will stay in ‘Auschwitz’. Bruno didn’t want to leave, because he had to miss his new best friend. So, he told Shmuel. They agree that Bruno comes over to the other side of the fence. Shmuel has a striped pyjama for Bruno. They were going to search for the father of Shmuel who was missing.

When Bruno’s mother and Gretel together want to go back to Berlin, they couldn’t find Bruno. They search everywhere. Then, his father, Ralf, finds the clothes of Bruno by the fence. He knows what’s going to happen. Bruno is going to die. Ralf goes into the camp and searched everywhere. He runs over the whole camp. But, he knows it’s too late. His son is dead.

I actually liked the book. It’s about the ‘Auschwitz’ camp and you can see how two nine year old boys think and lives. I found it very interesting to read. At first Bruno didn’t understand anything. He didn’t know what was happening at all. He didn’t like the place and want to go back to Berlin. But when he met Shmuel he didn’t want to leave anymore. He wants to stay so bad, that he goes to the other side of the fence. Of course, he didn’t knew what was going to happen. But I also think it was true friendship between Shmuel and Bruno. I liked that. Beautiful.