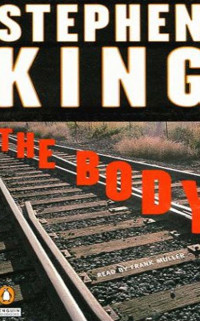 The narrative style of the body is ab ovo. This means the narrative starts at the beginning of the plot. And thus the plot will still develop throughout the book.

Flashbacks and/or flash-forwards? Yes, the whole story is an flashback. Since Gordon Lachance is actually telling us the story from his memories. Once in a while the flashback stops and we’re being taken back to the thoughts of the older Gordon.

The story is being told in a chronological order

The genre of The Body is an action/drama


Point of view (In short POV)

Omniscient or Limited POV? The point of view of Gordon Lachance is limited. We only know what’s going on inside his (younger) mind.

The protagonist of our story. He is a major dynamic character since he changes while the plot of the story unfolds.

He has one older brother, Dennis, who died prior to the start of the story through a Jeep accident. His parents were too fond of Dennis and therefore neglected Gordon hence to why he got so little attention. He feels as if he should’ve been the one that died since he was an ‘accident’, the doctor told his parents that they were infertile and that he wouldn’t have been missed by people if he did die. He has a terrible relationship with his father since he judges people – like his friends Chris and Vern too much.

Chris is a major dynamic character since he too changes throughout the development of the plot. Example: in the middle of their journey Chris told Gordon that he probably would enter a shop course instead of a college course. But after their journey it is stated that Chris too went to college course. Also just like Gordon he too stopped with going to their clubhouse.

His father is a horrible drunk, which he almost always is. His family has a bad reputation because of this. Many people in town – him included think that because of the bad reputation he won’t make it very far in life. He however is smarter than most people think.

Vern is a minor static character since he doesn’t change (a lot) as the plot progresses. Example: after their journey he still happily continues with his life as if nothing happened. He found new friends (with Teddy) and they still go to the clubhouse together.

He has one older brother: Billy. While Vern was digging around their porch he overheard Billy and his friend Charlie talking about a body, the body of Ray Brower. He is a bit dumb and gets scared easily. Usually does his hair in the style of his rock and roll idol, Bobby Rydell

Teddy is just like Vern a minor static character. He too doesn’t change (a lot) as the plot progresses. Example: after their journey he still happily continues with his life as if nothing happened. He found new friends (with Vern) and they still go to the clubhouse together.

His appearance is bit weird for he has a hearing aid and thick glasses. He has quite the laugh: eeee-eee-eee. His hearing aid was the consequence of his father shoving him down for 10 seconds on hot burning iron plate. His Father is a former veteran and has PTSD. However despite all this he still loves his father very much. He is often referred to as dumb and crazy.

The antagonist of our story(?). They are all minor static characters. At the end of the story we only know that Ace is still alive.

What do we know about them?

They are both minor static characters. The own the dump and scare the 4 boys when they are on dump-property. He insults Teddy and his father which makes teddy extremely mad.

The subtitle ‘Fall from innocence’ could be roughly translated to unknowing. The boys are unknowing of the hard facts of life. With the boys entering their adolescence it somehow also represents that they need to grow up. By venturing on this journey they do both, they find out that life and death aren’t too far apart. And by finding the body they, in a way, lose their innocence as well. Because they hadn’t seen anything really drastic in their life yet, and then they find the body.

Symbolizes the fact that Gordon thinks that some things are too beautiful or precious and by putting it into words will make them lose their worth – diminish their worth.

It shows the future of the boys. In the first toss they all have the same symbol, they all share the same fate. And then in the second toss Gordon is the one alienated. He has the ‘bad luck’ and has to get some food. In the future Gordon is the only one left alive. All the others have died quite early. The bad luck turned out to be quite the good luck later on.

Rumors told that Chopper the dog of Milo was a savage enormous beast-like dog. After confronting Milo and Chopper they realized that, those rumors weren’t true at all. Moral of the story of Chopper: don’t believe everything people say

The railway which the boys follow to find the body of Ray Brower is a long one. This symbolizes the fact that a good journey always takes times hence the long railway which they have to follow. Not only does it symbolize that but also the challenges the boys have to face like the train that almost ran Gordon and Vern over.

After the boys finally arrive at what seems to be a nice Lake they jump in. They swim and enjoy of the freshness that the lake offers. But after they find out that the lake is full of bloodsuckers they quickly move out of the water. Moral of the story of the Lake: the surface may be deceptive.

The story takes place in the fictional town of Castle Rock, Maine around 1960.

Around 1960 the prizes for food, according from the book, wasn’t that high. For three pounds of hanburgers, hamburgers rolls, four tonics, one churchkey the total amount was 2,13$. Now-a-days it ain’t that cheap. Also the boys play a game called three-penny-scat. We don’t play that now-a-days either.


Explanation of the booktitle

The Body is actually a really self-explanatory title. The boys in the book look for a body. In this case the body of Ray Brower. That body was the first body the protagonist had ever seen in his life.

Introducing the protagonist: Gordon and his friends: Chris, Vern and Teddy. You get some information about the appearance of Teddy and Vern but Gordon’s and Chris’ appearance isn’t mentioned. Their clubhouse is mentioned and Gordon, Chris and Teddy are playing a card game: tree-penny-scat. Vern joins them and asks if they are willing to camp outside, the other three don’t want that until Vern asks them if they are interested in looking for a dead body.

The rising action starts from the moment that Gordon and Chris meet up with each other. Chris hands Gordon his gun which he took from his father so he could feel how it felt like, Gordon accidentally shot the gun too. From this moment until they find the body the rising action takes place. Within the period of finding the body, numerous things happen. For example: the coin toss and Gordon getting food, the confrontation of the group with Milo and his dog Chopper, crossing the bridge and escaping the train. Etc.

The climax of the story starts when the bickering between the two groups starts getting serious. The older boys think they can handle the group of four because they are bigger, stronger and with more. At this moment Vern and Teddy escape the scene. Chris takes out his gun, and starts to threaten the older boys. When one of the older boys tries to get close to the group of – now two friends (Gordon and Chris) Chris pulls the trigger and the bullet lands near the foot of that boy. The older boys realize that Chris was serious about shooting them and then leave the place, but not before threatening them about how they were going to get beat up later.

Vern and Teddy come back and they see a crying Chris – which was a scene they had never seen before. Teddy insists on taking the body with them but he too refuses when he learns he can’t get into the army (his dream) if they got this on their record. Gordon notices some odd things about Ray Browers body, like how did his shoes get knocked off his body? And where was his tin pail? They head back home, after arriving at Castle Rock they separate to go to their own home. Chris worries Teddy and Vern will spill the beans but Gordon convinces him they won’t, they were just scared he says. Gordon gets back home to realize no-one missed him. His mother didn’t notice anything strange. The story never came out. Neither of the group of boys received any credit over it. All of the boys were beat up by Ace and his friends. Vern and Teddy drifted away from Gordon and Chris, they found new friends and still went to their clubhouse.

Vern died due to a house fire. Teddy died through a car accident, which didn’t sit too well with Gordon since he wasn’t alone in that car, he however did graduate. Surprisingly Chris also went to take-on the college-course, just like Gordon. No-one believed that he would make it, but with Gordon’s help he managed. They both graduated and were accepted at the University of Maine, but Gordon went to Orono Campus and Chris went to Portland Campus. Regrettable, Chris too died. He tried to make peace between two men, one of them had already taken out a knife. That knife stabbed Chris in the throat and he died almost instantly. And Gordon? He’s a successful writer, married and father of three kids, however he finds it hard to write. He visited Castle Rock and saw Ace again. He turned out to be a loser.