Sam is sixteen and a skater. Just so there are no terrible misunderstandings: skating = skateboarding. There's no ice. Life is ticking along nicely for Sam; his Mum's got rid of her rubbish boyfriend, he's thinking about college and he's met someone. Alicia.

Then a little accident happens. One with big consequences for someone just finding his way in life. Sam can't …

Sam is sixteen and a skater. Just so there are no terrible misunderstandings: skating = skateboarding. There's no ice. Life is ticking along nicely for Sam; his Mum's got rid of he…

Sam is sixteen and a skater. Just so there are no terrible misunderstandings: skating = skateboarding. There's no ice. Life is ticking along nicely for Sam; his Mum's got rid of her rubbish boyfriend, he's thinking about college and he's met someone. Alicia.

Then a little accident happens. One with big consequences for someone just finding his way in life. Sam can't run (let alone skate) away from this one. He's a boy facing a man's problems and the question is - has he got what it takes to confront them? 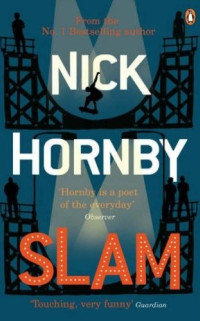 ‘’Slam!’’ By Nick Hornby – Summery
Sam is a 16-year-old boy who loves skating. Tony Hawk is his idol, he considers him as a father. In his bedroom he’s got a huge poster of Tony Hawk. Also Sam is the owner of the book of Tony Hawk, and Sam has read it many times. He knows the whole story out of his heart. Sometimes, when Sam is in trouble, he starts talking to the tony Hawk-poster. In Sam’s imagination Tony Hawk talks back, and he gives Sam answers to his questions. In the beginning of the book all of Sam’s questions were about skating, but later the questions are getting more and more personal. The actual answers that Tony gives Sam, are sentences or passages out of his book. But every time that Sam asks Tony something, there is a sort of hidden message that fits to Sam’s answers and that’s why Sam keeps on talking to the poster.

One day, Sam’s mother, Annie, asks Sam to come with her to a party of a co-worker, Andrea. Sam doesn’t really feel like going to a party with people of his mom’s age. Sam’s mother aks him to please come with her, and tells him that Andrea had a daughter who’s really nice and is the same age as Sam. De girl’s name is Alicia. Sam still isn’t really interested but goes with his mom because he was bored anyway. In the beginning of the party, Alicia didn’t pay attention to Sam, she wouldn’t even look at him. But Sam did look at her, and he thinks she is a very beautiful girl. So he went to her to make a chat. When Alicia still acts uninterested, Sam wants to give it up and he walks away. But at that moment, Alicia calls him back. She apologizes for her behavior and they chatted for a while. A few minutes later, it turns out that they like each other.

From that moment, Sam gets bored in the relationship. All they do is sit in the bedroom, watch TV or have sex. They broke up.

A week or two later Sam gets a text message from Alicia that she’s late. She didn’t have her period. They were afraid that she was pregnant. Together they went to the drugstore to buy a pregnancy-test. They didn’t have enough money to buy it, so Sam would go home to get money and they would meet 20 minutes later in the drugstore again. Sam can’t handle the idea of a baby, he would hurt his mom so much with this, particularly because his mother was a teenage mom, too. Sam is too afraid for the result of the pregnancy test, so he doesn’t show up in the drugstore again. That night, he got zipped into the future by Tony. Apparently, Tony wants to show Sam how it is to get a child on a young age. Sam wakes up in a bed next to Alicia, who looks unhealthy and a whole lot fatter than before. He hears a baby that’s crying. Alicia tells him to change the diaper of the baby. Sam has no idea how he has to handle that.

Back in the normal time, he can’t handle the idea of living like that, with Alicia and a baby on one little bedroom. He escapes from his life and goes to Hastings by train. He wants to start a new life there. He looks for a place to sleep, and ends up in a hostel. Now he only has to search a job to be able to pay for his shelter. He throws his mobile phone in the sea so he will never receive any text message of Alicia again. In the hostel he meets a old, grumpy man who asks Sam to help him with things he can’t do on his own. Sam gets enough money for it, so he decides to do it. But then, the old man was knocking on the door on the middle of the night, because he dropped his remote control and he’s not able to pick it up. He goes to Sam and wakes him up for this kind of chores. Sam’s had enough, he misses his mother and he wants to go home.

When he gets home, he finds out that Alicia is pregnant indeed, and that he has got to think of a solution for all this. His mother is very glad to see Sam again, she was really worried.

When the baby Rufus (mostly called Roof in the story) is born, Sam goes to Alicia’s house to live with her so they can bring up Roof together. He takes part-time lessons at school.

At the very end of the story, there is a glimpse in the future, where Sam has a new girlfriend, and Alicia has a new boyfriend. In the story they go out for dinner with the four of them.