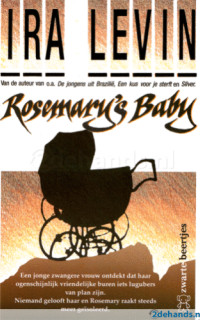 Meld je aan!
title: Rosemary’s Baby
author: Ira Levin
pages: 254
first publication: 1967
hard-/paperback: paperback
On the cover? It’s an orange piece of paper with the title on it. I think this isn’t the original cover, but the employcees of the library have changed it.
story takes place in the sixties. In a short time, 10 months. The story begins when Rosemary isn’t pregnant yet. Alittle before her pregnance. And it ends a few days after the birth of her child.
Locations: New York, at an appartement-complex calles the Bramford. It’s very dark and a sad place.

Why did you decide to read this book:
It’s such a famous story. It has been filmed so many times. I heard about it a couple of times and then I decided to read it for this booreport.
Time spent reading this book: 7 hours

Main-character 50 words to discribe him/her:
Rosemary Woodhouse: Rosemary is 25 years old and married. She loves her husband, and wants children with him. She’s a naiif person, because she won’t believe that her husband is lying to her, and believes everything what the doctor or neighbours give her or tell her. She is the most important character in this book.

Does he/she change in the story? in what way?
At the beginning she is to shy to do something against her husband and the neighbours. She is also very naive. At the end she is a strong person and however she couldn’t trust anyone she still try to take good care of her baby.


Next most import character? Tell something about him/her.
Guy Woodhouse/ Sherman Peden: Roseamary’s husband. 34 years old. He’s an handsome actor from Baltimore. He lies to Rosemary and does not take good care for her.

Is there violence in the story?
Rosemary’s husband didn’t take good care of her and the baby. He even raped her a couple of times.

Are there losers in your book? Who is it?
Rosemary is. There are so many wiches around her. She had been curses by them and her baby is also a little devil.

Was there a message by writing this story?
The book hasn’t learned me anything.

Which of the character would you like to meet?
The daughter of Castevet family. She has commited suicide. I would like to know her reason to do that.

The book was:
Ok for me, too childish for me, more boring/interesting than I expected, too complicated, a waste of time because... The book was ok for me, more interesting than I expected. I love thrillers.
I think the book is very nice, because it was exciting till the end. All the time you don’t know what is going to happen. That is why it’s so nice to read.
On a scale from 1 till 10...? 7,5