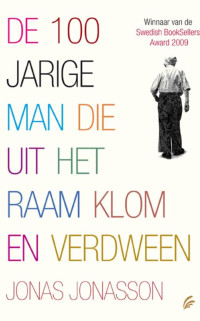 Allan Karlsson is about to become hundred years old and to celebrate, and a birthday party is planned at his retirement home. Everybody is coming, even the mayor of Malmköping, that’s the city where Allan does live in a boring retirement home, desperately waiting for his death. Allan is alert despite his age, but not so interested in the party. Instead he steps out the window and disappears. He decides to go to by bus to Byringe. At the station of Malmköping, he gets hold of a suitcase of drug money and becomes chased by both drug dealers and the police. On his road trip, he meets Julius, a master thief. They become friends. When they find out that the drug dealers are chasing them because of the suitcase, they move on and from this point, the story develops in a surprising way... From here on, the real adventure begins...

Filled with lots of adventures, Allan's life story is told in parallel to this. It doesn’t surprise me that one of his mottos is: “You’re never too old for an adventure.”  During his life, which is told in parallel to the “stepping-out-of-the-window-story”, he eats dinner with the future President Harry S. Truman, hitchhikes with Winston Churchill, and dances with Franco in Spain and with Stalin in Russia, travels on a riverboat with the wife of Mao Zedong and walks across the Himalayas on foot. The book contains also a lot of explosives and hilarious explosions, because Allan has only one big love: blow things up. This element fills the book with both stupidity and cleverness, a hilarious combination. If I gave you an example right now, you would look at me and wonder why that’s funny, so if you want to know these moments, you will have to read the book. As Allan makes his getaway, the already unlikely story even becomes less likely and the whole journey is involving criminals, several murders and an incompetent police officer. I don’t believe you have a logical connection between this and a hundred-year-old, until you’ve red the book.

Explanation of the book title

Why the author named the book “The hundred-year-old man who climbed out of the window and disappeared” is pretty easy to understand, even if you haven’t read the book yet. The title attracts your attention in a way you that you want to read the book. It’s sounds so surreal that it is hilarious and the book seams to be predictable if you hear the book’s name but as soon as you start to read, you’ll find out it is totally different then you thought it would be.

Description of the main characters

Because of lacking time and the huge number of (quite) important characters, I will describe three characters. Number one is of course the main character, Allan. The others two characters are two characters who played a quite important role in the tale and these two I liked the best: master thief Julius and Herbert Einstein, Albert Einstein’s stupid brother.

Allan is a kind of weird, and he never had been given to pondering things to long. He is filled by joy if blows something up and if he drinks alcohol. Typical for him, he always left other people to themselves, dead or alive. He didn’t care about that, because he knows there will be other people and it is useless or he would die if he would care.

Then you’ve got Julius, they become friends when Allan comes to the station of Byringe. He’s a master thief and really curious about the suitcase. As a master thief, he is stealing everything he likes. Surprisingly, nobody had catched him red-handed and they always had to let him go.

Last but not least, there’s Herbert Einstein. Briefly, he’s incredibly stupid but does exactly look like Albert Einstein. They meet in a goelag, a Russian prisoner camp, used by Stalin. Allan and Herbert will be there for five years until the camp was blown up by Herbert, he’d had thrown a grenade into the gunpowder storage. During these five years, the security has got used to the fact that Herbert was to stupid to remember where he did sleep or where the canteen was. He simply couldn’t remember it. His silliness makes it really funny. As example, Allan had made up a plan to escape and he needed Herbert to steal two uniforms from the laundry, acting like going to the canteen, because Herbert was the only person who could come everywhere without being shot. But Herbert didn’t understand what to do and as they come in the canteen, he said to Allan: “Allan, Allan, we are in the canteen, the canteen. We made it!!”

This story hasn’t got one specific venue, except for the escape Allan makes as a hundred-year-old, that part of the story chiefly does take place in Sweden, but does end in Indonesia.

As I said, the story does excist of two parts, Allan’s past life and his escape from the retirement home. These two parts are not really connected but both are told alternately. Remarkably, Allan played a key role behind the scenes in momentous events of the twentieth century, like inventing the nuclear bomb. In his past life, Allan has been travelling around the world for about 50 years, so that part hasn’t got a specific venue. Both parts are told in the simple past.

In which style is the story written by the author?

The story is quite easily written, you don’t have to puzzle on each sentence to understand it and it isn’t necessary to have a large English vocabulary to keep up with the tale. But you have to concentrate while reading, because sometimes, Jonas Jonasson has written one really important clue in one short sentence and if I hadn’t been focussed while reading, I’d probably missed these clues. And believe me, these clues are really important to understand the novel.

I really think the theme in this book is the sense of living. One good example from the book is: Because Allan was bored by his live in the retirement home, he decided to run away.

The book is questioning a lot about life. About being successful or not. About wanting to die.

I think the author wants to say that there will be always a reason for living. Like finding “the one” or helping someone who can’t take care for his own. Like Herbert, Albert Einstein’s stupid brother


What do I think of the story?

I think it’s a laugh-out-loud bestseller, because of its genius elements, like the silliness of Herbert and the ironic way Allan’s parents’ mottos both seam to be true.

Allan’s mother used to say: “Don’t think much, just do it; things are what they are, and will be whatever they will be.” While Allan’s father used to say: “Think before you do, you always can defend yourself in a way, you only have to find it.”

I thought it was well-written, easy to follow and a good theme. I’d like to read more from him.