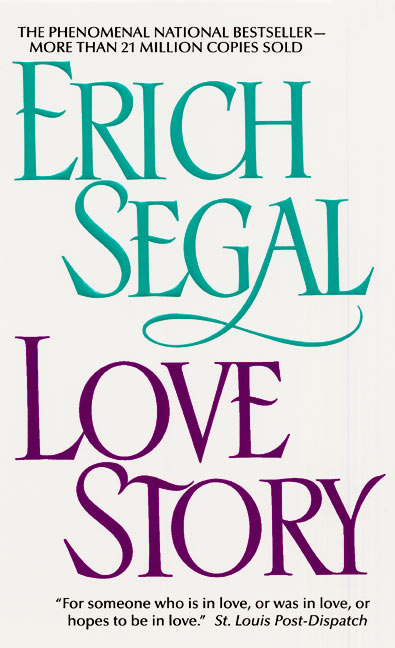 INTRODUCTION TO THE BOOK “LOVE STORY”
TITLE: Love Story
AUTHOR: Erich Segal
TYPE OF BOOK: A classical, tragic love story
ORIGINAL PUBLISHED: in 1970
PUBLISHED BY: Harper and Row, New York and Hodder and Stoughton, London
PUBLISHED IN HOLLAND: in 1986
PUBLISHED BY: Walva-Boek, Apeldoorn
POPULARITY
Over 21 million copies have been sold in 33 languages and it became one of the biggest best sellers of the 1970s. Also because it was made into a very successful film starring Ali McGraw and Ryan O’Neal.
SETTING

The story takes place in the 1960s in America. Oliver studies at Harvard and Jenny at Radcliffe, which are both part of Harvard University in Cambridge, a town near Boston, Massachussettes. Later on, when they married they moved to New York City.
CHRONOLOGICAL ORDER
The story is written in chronological order and has no flashbacks. The story tells about Ollie’s and Jenny’s life together, which lasts about three to five years. It starts at the beginning, when they meet and ends when they are separated because Jenny dies.
POINT OF VIEW
The story is written in the I-form and in this case Oliver is the I-person. You ‘see’ things happening through Oliver’s eyes and all his thoughts are written down.
ABOUT THE AUTHOR
Erich Segal is an American professor of Greek and Latin literature and used to be a marathon runner. He acted in movies and was a television commentator for the Olympic Games. Besides Love Story he has written amongst others, Fairy Tale, Yellow Submarine and