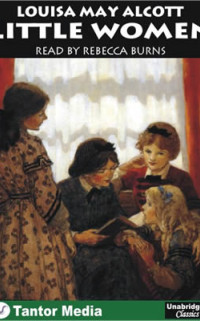 Four sisters Meg, Jo, Beth and Amy live with their mother, Mrs. March, and servant Hannah in a house next door to 16-year-old orphaned Theodore Lawrence and his grandfather.

Christmas is approaching but will look different from previous years as the father of the four sisters works as a doctor in the Civil War. There will also be no presents under the Christmas tree this year because the family does not have much to spend.

Mrs. March, also known as Marmee, therefore works extra hard for poor families, for example for the Hummel family who live in an old cottage.

Despite this unique Christmas, the sisters remain positive. Mrs. March explains that their poverty is not that bad and that there are many families who have it much harder than them. The sisters propose to make the best of it so that their father would be proud.

A big Christmas breakfast is waiting for the sisters on Christmas morning, but just before they want to start, Marmee proposes to give it to the Hummel family, who are especially struggling at this time of year. The girls are sorry but agree.

When they return home, the table is completely covered with all kinds of goodies. Their neighbor Theodore, aka Laurie, had seen their good deed.

A week later, a grand New Year's Dance is held in town and Meg and Jo are invited. Meg likes pretty dresses and dancing, but Jo doesn't like it. When Jo enters a room behind the dance room she finds Laurie, Jo and Laurie start talking and a close friendship develops.

One day, the terrible news arrives that Mr. March is extremely ill. Marmee wants to travel to him, but money is needed for that. Jo cuts her hair and that makes enough money for the trip. John Brooke, Laurie's teacher, suggests going with Marmee.

Meanwhile, Beth takes responsibility for the Hummel family. One day, Beth comes home crying because the family's baby has died from the contagious disease scarlet fever. Not much later, Beth also gets scarlet fever and she becomes very ill. The sisters send a letter to Mother March telling her to come back home, which she does. Fortunately, Beth is doing better and she survives the illness.

The following Christmas, Father is again the only one who is missing. Laurie has a surprise and surprises the sisters and their mother with Mr. March. John Brooke also comes home and asks Meg to marry him.

2 - Explanation for the title

The title of the book is Little Women, the book is so called because it is about four sisters who all grow up in their own way and become who they are. The girls are their father’s little womens and all four of them try to make him proud.

I think this is a good title because it does have something mysterious about it because you don't immediately know what the book is about. So you want to read the book to know what it's about, it's a catchy title.

Another title for the book could be 'The four sisters'. It is a bit more specific and gives away more about the content of the book.

Jo was born with the name 'Josephine', but she finds this name too feminine and wants her environment to call her Jo from now on. At the beginning of the book she is fifteen years old. Jo is very tall and thin and has gray eyes, her long hair was always netted so it didn't get in the way.

‘Fifteen-year old Jo was very tall, thin and brown, and reminded one of a colt; for she never seemed to know what to do with her long limbs, which were very much in her way. She had a decided mouth, a comical nose, and sharp gray eyes, which appeared to see everything, and were by turns fierce, funny, or thoughtful.’

Jo loved writing and it meant everything to her. When Amy and Jo get into a little fight one day and Amy secretly burns Jo's stories and poems, it becomes clear that Jo is not served by this.

‘ What! my little book I was so fond of, and worked over, and meant to finish before father got home? Have you really burnt it?’ said Jo, turning very pale, while her eyes kindled and her hands clutched Amy nervously’ … ‘You wicked, wiched girl! I never can write it again, and I’ll never forgive you as long as I live.’

Jo doesn't care much about her appearance and thinks other things are more important. When one day the massage comes that Mr. March is very ill and then Mrs. March has to travel to him, Jo springs into action and she will do anything to raise money for the trip, she comes home with 25 dollars.

‘My dear, where did you get it! Twenty-five dollars! Jo, I hope you haven’t done anything rash?’

‘No, it’s mine honestly; I didn’t beg, borrow, nor steal it. I earned it and I don’t think you’ll blame me, for I only sold what was my own.’

As she spoke, Jo took off her bonnet, and a general outcry arose, for all her abundant hair was cut short. ‘ Your hair! Your beautiful hair!’ ‘Oh, Jo, how could you? Your one beauty,’

4 - Where does the story take place?

At no point in the book is there any mention of where the story takes place. This assignment is therefore quite difficult and more of a puzzle than just a question.

At the bottom of the letter Mrs. March gets, is the hospital where her sick husband is. From this you can read that the story takes place in America and that the March family lives somewhere far from Washington as they need a lot of money to make the trip to the hospital.

‘Your husband is very ill. Come at once.

However, different countries in Europe are mentioned several times, for example Italy or France. It is then about a trip that will be made through Europe, this shows that the story is not set in Europe.

‘ Laurie didn’t seem to know where to begin; but Jo’s eager questions soon set him going, and he told her how he had been at school in Vevey, where the boys never wore hats, and had a fleet of boats on the lake, and for holiday fun went on walking trips about Switzerland with their teachers.’

Since the place is barely named, it is also not important to the story. You wouldn't have noticed if it had happened elsewhere.

In the back of the book there is a lot of information about the content of the book.It also contains a piece about the place where Little Women takes place.

‘Behind the scenes of Little Women

Meg, Jo, Beth and Amy live in the town of Concord, which is a real town in America, in the state of Massuchesetts. It is situated on the East coast of the United States, not far from Boston and north of New York. Though it is a comparatively small town, several famous American writers lived in Concord, including Louisa May Alcott of cours.’

The book has different themes and messages, the main message is that there are differences in life but that it doesn't matter and you should always stay positive. The March family lives in poverty, but because of Marmee's work, the four sisters realize that they have it not so bad after all. Because their father is away for a while, they all try to make the best of it, all in their own way, but the goal remains the same: to make their father proud.

Family is a theme that occurs a lot in the book, so the sisters all have a unique bond with each other. When they meet Laurie, they learn that having a family is not natural. Laurie is an orphan and lives alone with his grandfather and teacher. The friendship between the March sisters and Laurie is so great that at one point the sisters even see Laurie as a brother.

6 - Scene that appeals to me

The scene that appealed to me the most was the one where Mr. March returns home. It's a Christmas present from Laurie for the March family.

‘’Here’s another Christmas present for the March family.’

Before the words were well out of his mouth, he was whisked away somehow, and in his place appeared a tall man, muffled up to the eyes, leaning on the arm of another tall man, who tried to say something and couldn’t. Of course there was a general stampede; and for several minutes everybody seemed to lose their wits, for the strangest things were done, and no one said a word. Mr March became invisible in the embrace of four pairs of loving arms.’

Everything good the four sisters do is to make their father proud, so the whole book is a bit about this moment. The family is complete during Christmas and that feels good.

This moment is well written and the build-up is exciting.

7 - My opinion about the book

I liked the book but I don't think it falls under my favorite genre. I like romantic books more and this was more of a story about four sisters who all grow up in different ways.

The book is not difficult and reads well, only I found it a bit boring in the beginning and had a hard time getting into it because I didn't feel like there was a storyline in it. It's not a book you want to keep reading, you can stop at any time. The storyline in the book is the growing up of the sisters, so you don't really live to the end. With other books it is sometimes about murder, then you find out at the end of the book who did it and what happened, so here you would like to know what happens at the end, but with the book Little Women you don’t have this.

Although I didn't find the book very fun and exciting, it did leave a message for me. "You have to be happy with what you have and who you are and it doesn't matter what others think." I think that such a message is very important to keep repeating, especially this year. Due to social media, young people soon find themselves not good enough.

I also saw the movie adaptation of the book, which I really liked. This film is also about the second part of the book, where Jo temporarily lives in New York and continues working on her books, Amy has to find a rich man who can help the March family with money, Meg marries John Brooke and has children and Beth gets another illness and unfortunately this time does not heal but dies.

In the film, not only the friendship between Laurie and the sisters is clearly visible, but also their love relationships. Amy always feels like a second choice and has given up hope in a relationship with Laurie, but when it becomes clear that Jo never wants to get married, especially not Laurie, Amy suddenly becomes first choice. Amy finds this all very complicated and emotional. I also cried at this part of the film because it was full of emotion and something really happened this time.

So basically I recommend the movie to everyone but the book not.