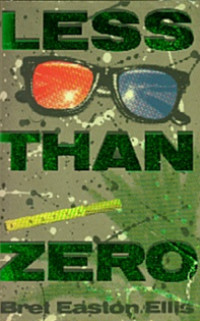 Plot Summary
The plot summary of the book is actually quite hard to tell, because the book doesn’t really have a story, a central happening or something like that. It’s more something like a description of his life. The main character of the book is called Clay. The novel follows his life, he is a rich and young college student who has returned to his hometown of Los Angeles in California for the winter break. He had been to college in New Hampshire and thought it would be nice to visit his friends and family in America. He spends most of time going to exclusive parties and doing drugs with his friends. Just before he left he had started a relationship with his best friend Blair, now he’s back and he must decide whether or not he wants to restart a relationship with Blair. But he doesn’t know if he really loves her, or likes her so he’s very much confused about that. During his decision-making he has one night stands with men and women, Blair doesn’t really approve that, obviously and the relationship goes downhill. At the same time he attempts to rebuild his relationship with his best friend: Julian. Things aren’t going very well with Julian, he has become a prostitute and drug addict, while Clay was in college. Julian asks Clay to borrow him so money to pay off his debts. Clay does offer him the money, but Julian cannot accept it in the first place, but eventually does and disappears without giving Clay the money back.. Clay used to be like his friends. But now he has changed. The following major events in the book all shock him dramatically. He cannot believe he used to be like this. First an anorexic friend of Clay, called Muriel, takes heroin even though there are people watching and taking photos. Clay thinks she did it on purpose, just to get the attention. Second, Trent, a friend, shows a snuff film at a party. A snuff film is a movie that depicts the actual death or murder of a person, without any aid of special effects. Every one at the party seems to enjoy it and only Blair and he seem to be disturbed by it. Then he finally finds Julian, he asks him for the money if he is ever going to get it back. Julian has an appointment, turns out that Clay is forced to sit in a chair for five hours to watch Julian sell himself to a businessman, in order to get money. Finally he meets friends at a concert, only to leave and not only find a dead body that everyone wants to see, but a naked 12 year old girl who is tied to the posts of a friend’s bed, and once again his friends are attracted to it. All these major events in the book lead Clay to leave Los Angeles. He loses his faith in his friends and cannot longer embrace the amoral party culture as he once did.

Point Of View + setting
The book is written in the first person. It sets place in Los Angeles in the 1980’s and its surroundings, such as Palmsprings where Clay goes to very often with his friends. The book is has a very nihilistic taste, all the characters in the book are very unhappy and out of control. They aren’t afraid to lose anything because they have everything and own everything, thanks to their generous but absent parents. In the 1980’s there was economic wealth and there was a lot of prosperity in the world. It was al kind of hopeful, which probably made it a little bit boring for clay and his friends.
The writer has a very powerful writer style, not to mention quite boring and depressing. He often tempts to use the word ‘Then’ too much. The monotonous tone of telling the story, may be he did it on purpose, may be he wants to emphasize Clay’s thoughts. I really don’t know why Ellis chooses this particular style. It’s simple, it’s very easy to understand. But the simplicity also makes it hard to keep paying attention to the plot. It’s told so easy and in a way everything seems to be normal, even the part where a 12 year old girl is being raped Clay keeps describing it just as he is eating a pizza or something like that. It’s something that makes the book interesting, but also very tricky.


The main character of the book is Clay,
Ellis presents Clay as a traveler, who is constantly on the road. Clay’s random driving on the Boulevards of LA reflects his lapse from inner direction. His journey is numb and particularly aimless. He doesn’t seem to have a goal to stray for. His life is monotonous and one place seems much the same as the other. Even though some events may shock him, he keeps telling the story in the same monotonous way.
Also I think Clay is kind of paranoid, in the beginning of the book he describes a sign, a billboard on the road that says: Disappear here. It is an ad for a holiday resort but he interprets it as the meaning ‘cease to exist’ and he applies it to his situation. Disappear here becomes a motif for the novel, and for Clay. He doesn’t want to be ‘home’, he doesn’t like the way of life in LA anymore. He wants to go back to New Hampshire and forget al the obscene and nasty things that had happened.
If I were Clay I probably would act the same way, may be not take that many drugs and hopefully act some what more responsible but I do understand him. All his friends are all going downhill, they do not realize the effect of the drugs, the parties the insomnia. It’s very comprehensible that Clay just kind of shuts himself of from everybody and tries to pretend everything is okay and fine, but deep down inside he feels anxious for the future. He doesn’t know how to develop in a society like that. He wants to escape, he wants to ‘Disappear Here’.


Evaluation
First, I really didn’t like the book, not even close. I thought it was too depressing, too dark and just too shocking. But after some thinking I have changed my mind, because there is a nice thought behind the book. To show the reader the sadness of the rich kids. They may have it all, but actually they don’t. They totally miss the love and security, the feeling of a nice and safe home. They all don’t want to admit it , but secretly they are all fighting not to show how much they long for a safe home, for loving and caring parents. I really like the thought behind the book, but I just cannot enjoy reading the book because of Bret Easton Ellis’ writer style. As I have mentioned earlier, he writes in a simple and easy way, which makes everything so shocking and obscene. The funny thing is, I’ve got a total picture in my head from the whole book. But there isn’t a place where Ellis describes a place, where Ellis talks about small details, to give you an idea what it looks like. I don’t like the style, but I do find it very interesting that I still got a total picture in my head, without any help from the writer. He leaves the imagination part all to the reader itself. That’s something I can appreciate.
After all, I can recommend the book as interesting and simple. And if you like shocking books, may be even good. As long you keep in mind that this book does not have a happy ending, not even close and you really shouldn’t read it if you feel very happy, because it will take your happiness down immediately