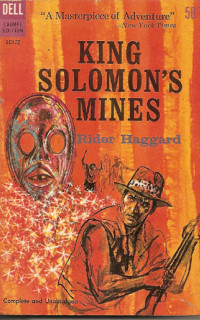 Meld je aan!
Summary
The book is about Sir Henry, Mister Quartermain and Sir Good. They all are good friends. Quatermain has found a treasure and wants to go find it, Sir Henry and Sir Good are going to join him. They have to travel to South Africa. Before they are ready to travel they have to hire a man to carry their goods. They hire a man called Umbopa.
They travel through deserts and mountains and arrive in a country called Kukuana. A guard in Kukuana tells about there king Twala. Twala has beaten his older brother Imotu, who was king first, because he wanted to be king. The wife of Imotu and his son Ignosi left Kukuana and the people of Kukuana thought that the both died in the mountains. After the had listen to the guard, Umbopa lowered his pants and let the citizens show his tattoo with the image of a blue snake, witch indicates that he is the son of Imotu, Ignosi. When Ignosi has defeated Twala in a fight, he becomes the king of Kukuana. Only the king of Kukuana is allowed to enter the mines of King Solomon. The three friends and King Ignosi enter the mine and find a big treasure of gold and diamands. The three friends take some of the treasure and go back home.