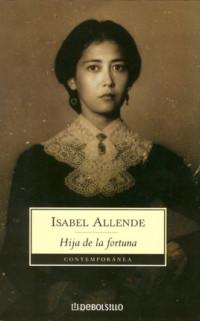 Meld je aan!
1 The book is called Daughter of Fortune and is written by Isabel Allende.

2a It was first published in 1999 as La Hilja de la Fortuna.
b The edition I read was from 1999 and published by Harpers Collins Publishers.

3 Eliza doesn’t know anything of her parents. When she was little Miss Rose, her brothers John Sommers and Jeremy Sommers took her in as their ‘daughter’. John is a captain on a ship called The Fortune. This ship is his great love. At the end of the story it is clear that Eliza is the daughter of a prostitute and John. She is the daughter of Fortune, in a symbolic way.

4 The literary genre of the book is a romantic novel.


5a The book is divided in three parts. The first part takes place in Valparaíso in Chile where Eliza lives. In the second part is the scene laid in China, and in the third part takes the story
Place in San Francisco
b The period of time in which the scene is laid is between 1843 and 1853. San Francisco is in the state of California which was still independent in that time. There are also flashbacks in the book. These are about Tao’s live in China and Miss Rose’s live in England. And sometimes there is a reference to the future.
As I said is the book divided in three parts, the first part is in 1843-1848, part two in 1848-1849 and the third in1849-1853.

6a The main character of the book is Eliza, the other important characters are Tao Chi’en, Miss Rose and Joaquin Andieta.
b *Eliza was just a baby when she was laid in front of Miss Rose’s and Jeremey Sommers’ door. They took her as their daughter and taught her to play the piano, to read, write, sing, dance, in short everything a young English girl should learn. Eliza isn’t the prettiest girl in town, but certainly not the ugliest one. She has a very good memory and can smell things from miles away. She loves to cook and has the strange ability to make herself ‘invisible’. Her presence is not noticeable. She can speak English, Spanish and Mapuche. She didn’t play much with the children in the neighbourhood. At the age of sixteen she meets her first and worst love, Joaquin. She travels to San Francisco to search him because he went away to search gold there. In California she enjoys her freedom and becomes a stronger woman.
*Tao Chi’en is a Chinese and is raised by Zhon Yi who taught him everything about medicines and herbs with curing powers. He was married once but his wife died. One day he is kidnapped and becomes a chef on the ship of John Sommers. John Sommers is Eliza’s uncle. The ship sails to Chile where he meets Eliza for the first time. Tao helps Eliza with her journey to San Francisco. Nobody knows she is on the ship but Tao. He also takes care of her when she has her miscarriage. They have a beautiful friendship. Toa is a good person he helps prostitutes in San Francisco as much as he can.

*Miss Rose is Eliza’s foster parent. She has never been married, but in England she once had a lover. When Jacob Todd falls in love with her she rejects him every time because she stills loves her lover. She writes romantic novels in secret. Her brother sells those novels in the United States.
*Joaquin Andieta lives with his mother in one of the poorest districts of Valparaíso. He also works for Jeremy Sommers, Miss Rose’s brother. When Joaquin brings something to the house of Eliza they fall in love. Joaquin writes Eliza letters, those letters are very important for her. He is infected with the famous gold fever. So he leaves Eliza and goes to San Francisco. His love for gold is stronger than his love for Eliza.

7a The main theme of the book is hope and greed. Eliza has lost her love for the taste of gold, but she tries to track him down. Even if he is miles away and if she has to endure terrible situations. She still believes she will find him. The people she leaves behind are also hopeful when they are in the search of Eliza. Miss Rose and John Sommers are certain they will find Eliza.
b I think Allende wanted to achieve more then entertainment. Maybe she wanted to learn others about the history of Chile and the gold fever. She further wanted to tell a great love story and that love should be taken seriously, even if you’re just a young person, or if it’s your first love.

8 Pages 104 and 105
In this passage Joaquin and Eliza meet and talk for the first time. Eliza could sneak out from one off Miss Rose parties to go to Joaquin. They are both shy, since they never talked to each other before. Eliza did dream about Joaquin, she fantasized about him and thought he would be called Sebastian because he looked like the martyr.
These ‘Wednesday meetings’ are the beginning of their love. Joaquin begins to write letters and they make love for the first time. Miss Rose, John and Jeremey know nothing of their love although they suspect something is going on.
When Joaquin tells Eliza he wants to go to America to search for gold she is devastated. Apparently, for Joaquin, gold is more important than their love. Joaquin is leaving behind Eliza, now pregnant with his child. Spirited and with a mind of her own, Eliza leaves her home in Valparaíso and undertakes a dangerous sea voyage to San Francisco in search of her lover. On this voyage she meets Tao Chi’en. Eliza is very sick and is having a miscarriage. She thinks she’s going to die but Tao looks after her. A good friendship has begun. Eliza pretends she is Toa’s brother to get of the ship unseen. In San Francisco everybody is under the spell of gold. Everybody thinks they can get rich. Prostitutes, gold diggers, traders, everybody wants money. Tao helps Eliza in her search for Joaquin; everywhere they go they ask for him. When somebody says he had seen him she wants to find him and Tao stays behind. Joaquin’s letters and their meetings are the only thing that she has of their love.
Eliza travels further as a boy, that way it is easier to get things done. The men in those days weren’t very polite to women. Eliza joins a caravan with mainly prostitutes. They settle in a village and stay there all summer. One day Eliza reads a piece in the paper about a bandit called Joaquin Murieta. Off course, you immediately think this is her Joaquin and also all the descriptions look a lot like Joaquin. Eliza is troubled, she doesn’t know if she should follow this trace. Joaquin has become a criminal and her love for Tao is growing deeper without her even knowing it. During her search Eliza has grown into a strong woman; she is no longer the child who was to shy to talk. The meetings she had with Joaquin look like dreams and she doubts herself if they ever really happened. Eliza is a woman now, she no longer dresses up like a boy.
In the meanwhile, she and Tao have settled in Sacramento. Eliza wants to know more about the bandit and when she hears he is captured and his head is displayed for the audience she goes to see it. When she comes out of the room Tao asks her it it was him. She replies “I am free” and they both walk away.

9 I choose this book because the cover of the book was very pretty. I like those old pictures; they always have something mysterious over them.

10 I loved the book! My favourite books are romantic, are set a long time ago and have a happy ending. This book had every thing I liked. I think it was a really good book. It has a lot of strong sides and has a quick way of reading. History is a big part of the book but Allende writes in a way which isn’t boring. I already read a few books of Allende and this book became my favourite one.