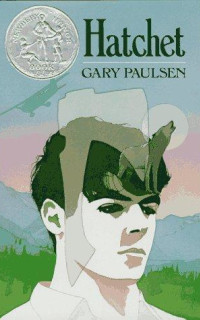 Meld je aan!
Summary:
Brian Robeson is the main character of the book. He is 13 years old en on his way to his father. His father lives in Canada. Brian is going by plain to see him. On the flight the pilot, who is the only other person in the plain, has a heart attack. Brian tried to make contact with the radio but that does not work. The plain is now flying at a different rate, but Brian keeps flying. After a while the plain is out of gas and it crashed in to the Canadian wild. The plain crashed in a lake. He climbs out of the plain and falls to sleep. When he woke up there where a lot of mosquito’s. He falls back to sleep. This time when he woke up he is thirsty. He drinks the water of the lake. The only thing he has got is his hatchet. His survival package is still in the plain. He finds a shrub with berries but when he eats the berries he became ill. He finds a cave and turns that into a sleeping shelter. Then he finds raspberries. When he was picking the berries there suddenly came a bear. Brian was afraid, but the bear does not hurt him. That evening in his cave there was a porcupine. He threw his hatchet and that caused sparkle on the partition of the cave. He makes a fire whit his hatchet. He finds more and more ways to survive. Brian was attacked by an eland without any reason. Later that day a tornado came and its fire goes out. Because of the tornado the tail of the plane is now above water. He decides to swim to the plane to get the survival package. The package contain: a sleep pocket, fish tools, first aid box, pans, food, a lighter and a gun. He finds a radio which transmits a tone, but it does not seem to work. When Brian continued eating a plane came, the pilot has caught the tone. Brain is saved.

I think this could happen to everyone. I think in never go in a small plane above the Canadian bush, this would not happen to me fast. The story is credible, I don’t now if it really happened. The situations in the story are very real. I don’t now how I would react.