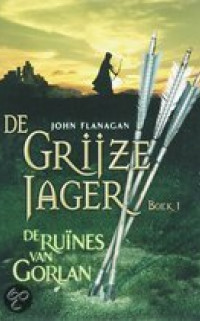 1. Give a brief summary of the story in your own words.

Will has dreamed his whole life to become a knight, just like his father. Will never knew his father and mother. He only knows that his father is a hero. He was put in the orphanage when he was little. Nobody knows who. When he is old enough, Will goes to the Knight School of Castle Redmont to become a knight. He is rejected for this but Halt (the mysterious hunter) wants Will as his student as hunter. Will trains hard and he has to learn to ride on his pony pull. After seven months when Will is good enough as Jager, he goes to a hunting meeting with Halt. Here he meets the previous pupil of Halt, Gilian. At this meeting they learn that Morgarath declared war. Morgarath is the king of the dreaded realm of night and descent. Will discovers that Morgarath wants to kill the king with a lime, a two-meter beast with hair as a shield. Halt, Gilian and Will have to kill the lime macaws. Just in time, Will kills the last Kalkara with his bow and arrow. Halt tells that Will his father saved him in the past and therefore died himself.

2. Describe the setting: the time(s), place(s), and general background(s) of the action.

It takes place in a fantasy world, it only seems a lot in the Middle Ages. Because the story plays a lot around the castle and there are knights. It takes place in the Kingdom of Araluen. In that kingdom you have multiple provinces

The title is Ranger's Apprentice and it means pupil hunter. It’s goes the whole story over that Will will be trained as a ranger.

You have many important people in this story but the most important is Will: Will is an insecure boy who wants to go to the martial school, only he is too small. He is therefore very suitable for spying. Will is very brave and becomes as stronger as the story gets. He is very curious and asks many questions to his teacher. Another main character is Halt: Halt is Will's teacher. Halt laughs rarely and is also quite small but very strong. He has black hair and has all his first gray picks. He is also very jealous, very silly, and at the 2 Ranger’s Apprentice; The Ruins of Gorlan beginning, he doesn’t even give comrades. At the outset, he finds it annoying that Will asked so many questions, but that changed more and more.

2. Describe their development in the story, if there is any.

Will: Will is getting brave as the story goes on. He also thinks better before doing anything. He also knows better when he has to stop asking questions and when he does not have to go into discussion. Halt: Halt is getting calmer, relaxer and accepts Will be more and more questions. Of course, Will still has to bother, but he does not let him out of those rocks. Occasionally, there is a smile when he never did it and occasionally makes a dry note.

1. Who tells the story? (Omniscient author? An ‘I’-voice? A ‘he/she’-person? Several of these combined? Or is the story-teller unknown?

The story is told from Will's vision. You read what he thinks and sees. So the book is mostly told by Will, sometimes there’s a page between someone else's vision.

2. How is the story told? Mainly through ‘showing’, ‘telling’, both? Explain.

Both, because most is told by Will. He also often describes projects, because of that, both.

1. What is the theme of the work? What are the main ideas expressed in it? Prove your answer. (Examples: friendship, loneliness, politics, power, love, hatred, truth, falsehood).

It's a lot about having friends and patience. At the beginning, Will often has conflict with a year-old, only in the story they begin to help each other and help each other. Friendship is therefore very important. Patience is also important, Will had to practice and train a lot but eventually you get there. Also, you must be patient with the waiting for the good in the future. So having patience can make it happen.

2. What is the moral of the work? (Examples: Nobody can do without friendship. Never judge people too quickly. Power corrupts. Love is beautiful.) I have already answered this question a bit with the previous question. But, it's important to have friends because they can help you in difficult times. Also, having patience and perseverance is very important. This can make you very far in the future.

1. What is your opinion? Which aspects especially do you like or hate? Why? Support your opinion from the work itself, e.g. by quotes or illustration.

It's a very nice book, this is because it is told by Will, that’s why you have a good idea of what's happening and feel more like you're right there. Here's a quote describing what happened to Will: "Will heard in someone wandering around, and then there appeared (...) What smelled that guy. Like a stable and no clean stable."