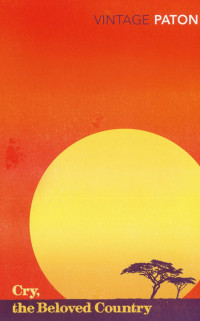 Century / movement it’s from:
Cry, The Beloved Country was written before the implementation of the infamous apartheid political system in South Africa. The novel was published in 1948, with apartheid becoming law later on that same year.
Cry, The Beloved Country had critical success around the world, except in South Africa where it was banned, due to its politically dangerous material. The book sold over 15 million copies around the world before Paton's death.
The book is studied currently by many schools around the world. The style of writing is often compared to the King James' Bible, in which Paton's writing does tend to fit. Paton was a devout Christian.


Most important themes:
Cry, the Beloved Country is a social protest against apartheid. Alan Paton attempts to create an unbiased and objective view at this social structure. He creates the 'Whites' affected by 'native crime', whilst the 'Blacks' having social instability and moral issues due to the distablishment of the 'old guard'. All this, however can be disputed. It shows many of problems with South Africa such as the land reserved for the natives degrading, which is sometimes considered to be the main theme, the disintegration of the tribal community, native crime and the flight to the urban centers. There are many more themes one could find, but these are some of the most commonly addressed. The quote below shows another recurring theme which is how fear affects the characters and society of South Africa.
“Cry, the beloved country, for the unborn child that is the inheritor of our fear. Let him not love the earth too deeply. Let him not laugh too gladly when the water runs through his fingers, nor stand too silent when the setting sun makes red the veld with fire. Let him not be too moved when the birds of his land are singing, nor give too much of his heart to a mountain or a valley. For fear will rob him of all if he gives too much.” — Cry, The Beloved Country, Chapter 12.

Main characters:
The main character is Steven Kumalo. He's a reverend in Ndotsheni, a village in the hills of South Africa. When he gets a letter from a colleague reverend, he goes to Johannesburg, to see his very sick sister Gertrude. He also meets his brother John, who he hasn't seen for years, again. In Johannesburg he sees the bad situation of the country, the black labor-people don't take the work-pressure anymore. A lot of white people get murdered and his brother John, a black politician, is doing dangerous thins when he causes a riot when he speaks to his black 'brothers' in public not to take the pressure from the white people anymore.


Setting:
The story takes place in South Africa, mostly in Johannesburg and in Ndotsheni, around 1946. The time gone by in the book is around five weeks.

Good book?
Yes I think it’s a very good book. It is about a really important issue, even today it’s still actual. It helps you to get a better opinion about apartheid.

Recommendation:
It would be good if others read this book also. A lot of people don’t know anything of apartheid, and how “our people” behaved in South Africa. Also it would be a good lesson for our life today, with our multi cultural society.

Crucial passage:
In chapter four of Alan Paton's Cry, The Beloved Country the protagonist, Stephen Kumalo, experiences the bustling corrupt city of Johannesburg for the first time.Kumalo is a naive priest from an isolated African tribe in segregated South Africa who enters Johannesburg, the center of the moral and racial confusion of South Africa. Kumalo fears this place because he is uneducated in the ways of the world outside Ndotsheni. The passage
describes Kumalo's understanding of the larger picture of South Africa; he begins to change from a naive child into a wise adult. At first Kumalo was in awe of the city's neon lights, then he was confused by the people and their journey to the "underworld." In the end of the passage, Paton establishes Kumalo as a child who clings to his faith.

Character I dislike:
Absalom. Because he has done such awful things in his life. He killed Arthur Jarvis, impregnated a young woman without marrying her, only in the end when he was sentenced to death he married her. I think it was a fair decision to give him the death penalty.

Favourite character:
Stephen Kumalo. Because he is a wise man, he knows how to deal with difficult situations, wants to help people in poor situations etc. He is a very sympathetic man.

Compare to other books:
It’s the first book about apartheid I’ve ever read. So it’s very difficult to compare it to other books I’ve read so far.

Summary:
The novel opens in the village of Ndotsheni, where the black pastor, Stephen Kumalo, receives a letter from the priest Theophilus Msimangu in Johannesburg. Msimangu urges Kumalo to come to the city to help his sister, Gertrude, who is "sick." Kumalo goes to Johannesburg to help Gertrude and to find his son, Absalom, who had gone to the city to look for Gertrude but never came home. Upon his arrival in Johannesburg, Kumalo learns that Gertrude has taken up a life of crime. Gertrude agrees to return to Ndotsheni with her young son.
Kumalo embarks on the search for his son, first seeing his brother John, a carpenter who has become involved in the politics of South Africa. Kumalo and Msimangu follow Absalom's trail only to learn that Absalom has been in a Reformatory and impregnated a young woman. Shortly thereafter, Kumalo learns that his son has been arrested for the murder of Arthur Jarvis, a white fighter for racial justice and son of Kumalo's neighbour James Jarvis.
Jarvis learns of his son's death and comes with his family to Johannesburg. Jarvis and his son had been distant, and now James Jarvis is looking to come to know his son through his writings. Through reading his son's essays, Jarvis decides to take up his son's work on behalf of South Africa's blacks.
Absalom is sentenced to death for the murder of Arthur Jarvis. Before his father returns to Ndotsheni, Absalom marries the girl he has impregnated, and she joins Kumalo's family. Kumalo returns to his village with his daughter-in-law and nephew, finding that Gertrude ran away on the night before their departure.
Back in Ndotsheni, Kumalo makes a futile visit to the tribe's chief in order to discuss changes that must be made to help the barren village. Help arrives, however, when Jarvis becomes involved in the work. He arranges to have a dam built and hires an agricultural demonstrator to implement new farming methods.
The novel ends on the night of Absalom's execution, which finds Kumalo praying on a mountainside as dawn breaks over the valley.