Can you keep a secret? door Sophie Kinsella 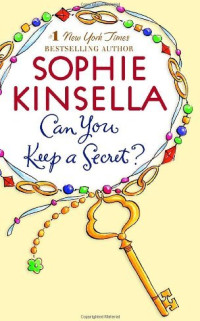 The book and its author
I wrote my book report about “Can You keep a secret?” The year of the first publication was 2004, which is pretty recently. The edition I’ve read was written in 2005, published by ‘The Dial Press New York’, and exist out of 357 pages.
The author is Sophie Kinsella, but her real name is Madeleine Wickham. Madeleine was born in Londen at the 12th of December 1969. The country she grew up in, and where she’s still living, is England. Her first book was The tennis party, written by her official name Madeleine Wickham. The books which made her a famous author are the Shopaholic series. Other titels are “The Undomestic Goddess” and “Remember Me?”.
The motto which stands in front of the book, is:
“To H, from whom I have no secrets. Well, not many.”
This is about having secrets in a relationship, which the book is all about. It’s about the good and bad things of trust and secrets. Because of this I think that her intention was to tell people that it is normal to have some secrets for your partner, but that trust is very important too.
This motto says at the same time to whom the book is dedicated: to H. You can’t know it, but I think that H is her husband, Henry Wickham, because it’s about relationships, and her husband’s name starts with an H.
The book looks a bit like a children’s book, because of the illustration at the front which is a bit childish.
The contents
Most of the story takes place in New York, at the office from the Panther Corporation, in the apartment of Emma Corrigan, and around these places. You don’t know exactly how much time the story overtakes, but I think it is about a couple of months or even a couple of weeks. That’s because Emma met Jack at the beginning of the story, then he came to New York, and stayed there until at least the end of the story.

Characters
The very main character of the book is Emma Corrigan; she’s a 25-year old businesswoman who is very spontaneous. You read the book out of her eyes.
Jack Harper is also almost a main character, because Emma’s life is all about him at this time. Jack Harper is the boss of Panther Cola, and he is a rich, social guy, but is also very closed about himself. Jack and Emma are first related to each other as strangers, but later as boss and colleague and at the end of the book also as partners.

The minor characters in the book are:
-Lissy, Emma’s best friend and roommate
-Jemima, also a roommate of Emma
-Connor, in the beginning of the book Emma’s boyfriend, but later ex-boyfriend
-Sven, a guy who is always with Jack Harper, he’s his chauffeur, and probably also bodyguard
-Artemis and other colleagues from the Panther Corporation
In fact these are all minor characters, but because you’re told so much about them, they almost look like important characters from which you know much about how they are.