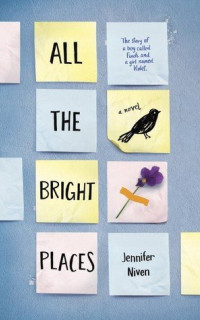 The main characters of the book “All the bright places” are two teenagers: Violet Markey and Theodore Finch. Violet Markey is a very popular girl and Theodore Finch is the school freak. They attend the same high school but don’t know each other well until the evening when they meet on the school's clock tower. They both want to commit suicide. They are surprised to see each other there at night at the same time with the same thoughts. They start a conversation. Violet tells about the death of her sister Eleanor, who was killed in a car accident. This makes her so sad that she doesn’t want to live anymore.

This is the beginning of their friendship. Violet shares how she feels with Finch and it helps her to deal with her confusing emotions. She feels better every day.

Finch keeps his thoughts for himself but being suicidal is his daily activity. He writes fun facts about the suicides of others in his "Doogie Howser style" journal. You soon learn that Finch can't take care of himself, but he can help others in crisis situations. He uses his charm to convince Violet not to jump off the tower.

They got an assignment to “wander” to places and write a report about it with someone from their class. Of course, Finch chooses Violet as his partner. Soon, Finch and Violet begin to “wander". Together they see many things, including a homemade roller coaster and the highest hill in Indiana.

During these adventures, Finch acts like a counsellor to Violet. As she gets better, Finch's situation gets worse. He has undiagnosed bipolar disorder. To make matters worse, he has 99 problems.

His relationship with Violet is going great until one warm afternoon. After swimming in the Blue Hole, they accidentally fall asleep and don’t wake up until the next morning. This doesn't exactly endear Finch to Violet's parents. They are very furious, and they forbid her to see Finch ever again.

On the same night Finch takes a bunch of sleeping pills. He changes his mind immediately and admits himself to the emergency room to get his stomach pumped. Shortly afterwards, he goes to a suicidal prevention group in a nearby town to get help. He meets a girl from the same school and she tells Violet about Finch's suicide attempt. Now Violet is concerned. Finally, she confronts Finch and they get into a huge fight. She wants to help, but he won't let her. Violet tries to enlist her parents' help, but it's too late. This is all getting too much for Finch. He runs away from home. No one is looking for him except Violet, but he doesn't want to be found. A month after he disappears, Finch sends emails to pretty much everyone he knows. They are all a version of goodbye. Panicked, Violet searches through his belongings and learns that he may have drowned in the Blue Hole. She goes there and proves she's right. Her life goes on. Violet graduates and goes to follow her dream of becoming a writer. From that moment she accepts her own life as it is.

Even though the topic of this book is serious, it is very funny, with a lot of jokes. It is easy to read and I can recommend it to all teenagers.