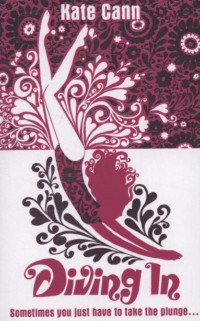 Col is in love with a handsome guy who, like her, is in the pool every Thursday night. She's just afraid he won't see her. But she does dream about him.
If, on a Thursday, like every week, she goes swimming, she runs into him like that. She stutters, apologizes and is ashamed to death. But he laughs and says it doesn't matter. Then he walks on.
The following Sunday Col is depressed, because the night before was not very pleasant, and she decides to go for a swim. In the indoor pool she finds it too crowded, so she goes outside. There she jumps off the diving board and almost ends up on top... hello. She apologizes and they continue their jobs together....
When they are done with that, have showered and changed, they go for a drink together. Col loves it and they talk for a long time. She finds out his name is Don.
After swimming a few more times, Col and Don go steady. They do nice things; they eat together, go to a pop concert, cycle long distances, walk and talk about all kinds of things. Col is tremendously in love and she hopes that Don feels the same for her...
But once they're out together, it almost goes wrong. Col and Don are kissing in an alley and he goes further than she actually wants. Then Col pushes him away and they cycle home together.
On the night of a party something happens that Col doesn't really like. Her best friend Val and her best friend Greg are secretly kissing in a corner. Of course she has Don, but still she feels closed out. A few days later, she's told they're dating.
Col is very happy that week. But unfortunately Don can't make an appointment, he has exams. On Wednesdays she has so much energy, that she goes for a run. When she arrives in the park, she hears a frightened scream. It's coming from the bushes. She knows the girl's voice. It's a girl from her class! She's running towards it. There's two guys with her. They're coming at her together. But she knocks them both down. She learned that in self-defense. She goes home with the girl.
A few days later, Don calls her. He asks her if she wants to go to their summer cottage with him and his parents that weekend. Col loves it and likes to go. She asks her mother and she's allowed! Her father drops her off at Don's house and together with him and his parents they go on their way.
The journey isn't that long. Once they're there, Col loves it. The air and the
landscape are beautiful. Don and Col go for a walk together and they talk and kiss a lot. When they lie in the grass together, Don rolls on top of her. At first, Col doesn't mind,
but then she's not sure if she likes it anymore. Don is very strong. Then she pushes him away and together they go to a village for a drink. Then they go back to the cottage for dinner.
After dinner they go outside again. Into the garden. It has become pitch-dark. When they are at the end of the garden, they lie down in the grass. Don touches her everywhere and wants to go even further, but for Col it's enough. She says she's cold and they go inside.
But once they're inside, Col doesn't like it any more. She has to sleep in one bed with Don and she absolutely doesn't want to! But Don says she shouldn't be so hard and that only makes her angrier. Don knew she didn't want this! And his dad and stepmom are just having fun. They're just assuming Col's okay with it. Then Col and Don get in a terrible fight. Don keeps saying she shouldn't give it a hard time, but Col really doesn't like it. Then she decides to go downstairs and sleep on the couch in the dining room.
The next day she is woken up by Fran, Don's stepmother. Fran says she should have kicked Don out of the room and slept in the bed herself. But Col doesn't want to hear it. Fran was in on it just as well. She'd made the bed. She asks if the bathroom's free and takes a bath there.
When she drives back in the afternoon, Col acts like she's asleep. When she comes home, she goes straight to her room and cries for a long time.
In the evening she goes downstairs. Her mother asks what happened and she tells the whole story. When she is told, her mother is so angry that she runs to the car and goes to Don's house. Col goes with her.

When they get there, her mother's gonna go nuts. She says it is terrible what they have done to her daughter and that it is good of Col that she has gone downstairs to sleep. She yells that it's not fair that they force Col to sleep in the same bed with Don and goes on like this. Then they leave.
When a week has passed, Col goes shopping with Val. In the afternoon they eat at the McDonald's. When Col walks to a table, all of a sudden Don is standing in front of her. He says he's sorry about what happened and asks if she wants to give him another chance. For a moment, Col is in doubt. Then she says she wants to try and they meet for the evening.
When she gets home, she tells her mother what happened in town. She expects her mother to get angry, but she doesn't. She says Col's old and wise enough to decide that for herself now. Then Col's gonna get dressed for that night...