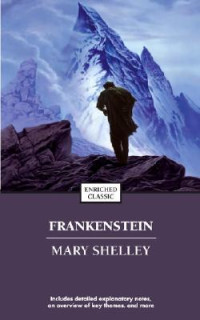 Dit is geen verslag van het officiële boek. het is afkomstig uit een dunner boekje namelijk: Heinemann Guided Readers - Elementary Level.
Victor Frankenstein was born in 1870, in the city of Geneva. When he got older, he went to a University to study science, to become a doctor. He studied hard and wanted to know everything about the human body, and about the human mind. But most of all: he wanted to learn the secret of life. He was willing to do everything for it, He even paid men to steal dead bodies from graves. With the body parts he created a whole new person: A strong man. He was going to give this man life. One day when his laboratory got hit by a lightning, the man came to life. But it wasn’t the person Frankenstein had expected, in fact; it was a monster. Frankenstein ran away but the monster was coming after him. After that, his laboratory got on fire. And Frankenstein became unconscious. After a while Frankenstein woke up in a hospital. He thought the monster died in the fire and everything was okay. He now decided to study languages with Henry. But after a few months, he received a letter, which said that his brother had died. He decided to go to his family in Geneva, but when he got there, he saw the monster climbing up a mountain, He knew that the monster killed his brother, so he tried to catch him, but the monster was too fast and ran away. His family thought that William got killed by the girl who looked after William. Frankenstein tried everything to convince them, but it was too late. She was already dead. Frankenstein felt sad and went to the mountains to feel better again. But while he was sitting there he saw something coming towards him, It was the monster; he wanted to tell his story. After the monster told his whole story, They made a deal: If Frankenstein made a woman for the monster, he would leave the town and live far away from other people. Frankenstein left Geneva for The city of Strasbourg, where he began with his work. Once again he paid men to steal body parts from graves to create a new person. This time he knew what he was doing: he knew he was making a monster. But one day his friend Henry came in and found out everything, and Frankenstein told his whole story to Henry. They decided to destroy the female monster. But suddenly the monster came in. He was very angry and killed Henry immediately. He then told Frankenstein that he would return at his wedding night. After that Frankenstein got unconscious again. When He woke up, he found himself laying in a small white bedroom. His father came in and told a doctor to examine him. The doctor told Frankenstein that he has been very ill. Frankenstein tried to tell them everything but they didn’t want to believe him, and took him home. When he got home again he promised Elizabeth to marry her. He knew the monster would come at the night of the wedding, so he decided to carry a gun with him. After the wedding, they left for their honeymoon, the journey started by boat. Everything went well, and for a second he thought that maybe nothing would happen. But suddenly he heard a scream, and rushed to the room. But it was too late. Elizabeth was laying dead on their bed. When he looked outside the window, he saw the monster in the distance, he tried to shoot him but it was too late. The monster escaped. Frankenstein went back to Geneva. When his father heard the news, he became ill, and died a few weeks later. The only thing Frankenstein wanted now was revenge. He was going to do everything to kill the monster. Frankenstein followed the monster everywhere. Through forests and deserts, through flat plains and high mountains. Finally the monster stopped at a place of ice and snow, And told Frankenstein that he was the one who killed his family because he created him. Frankenstein didn’t have to kill him anymore, The monster promised him he would throw himself into a fire, and left. Frankenstein also decided to kill himself. He sat down in the snow waiting to freeze to death.