1.2 I think The fault in our stars is a good title for this book because it is a story about two teenagers who fall in love with each other, but who can never have a long and happy life together. Their early deaths, their illnesses, it was all written in the stars. They could not change their destinies. That was the fault in their stars, to find love but not being able to enjoy it for long.

3.1 The aspect of the book I liked best, is the way the story is told. I like how you see the story through Hazel’s eyes and how you get to know her feelings and thoughts. I like when a story is told this way, that way you can really get into the skin of the protagonist. You only know what the main character knows and what she feels, so when you are reading this book it is almost as if you are the main character, as if her thoughts are yours. This makes it easier for the reader to relate with Hazel and to understand why she does the things she does.

3.2 The aspect of the book I liked least is the way the conversations are written. They are written in a very simple way, for example: ‘”Yeah,” I said. “Sucks,” he said. “I’m a lot better now,” I said.’ (Page 130). I think the ‘I said, he said, I said’ is annoying, I think the writer could have given it more, I think he could have made the way the conversations are written down more interesting by saying something about the tone or just leaving the I said/he said away.

4.1 The events that I liked most are the moments that Hazel’s mom decides to celebrate something. She celebrates the stupidest things, like bastille day or half-birthdays. I love how her mum tries to make a party out of live, how she tries to make Hazel enjoy every day. I really like that Hazel’s mom continues doing this throughout the entire book. She doesn’t change, even after all the drama with Augustus she still tries to make every day a party.

4.2 The event that I liked least is when Augustus calls Hazel on page 242. This is when he has driven to the gas station to buy new cigarettes. He calls Hazel because something is wrong with his G-tube and he doesn´t want to call an ambulance. I think this is the saddest moment in the book. On this moment you realize how weak Augustus really is and how much he wants to hold onto his pride. This was the moment in which it really hit me how weak Augustus was and that he really was going to die. From this moment on he is no longer smiling with an unlit cigarette dangling in his mouth, from this point on he really is an ill boy who cannot be cured and who will certainly die within a year.

5.1 The protagonist in this book is Hazel. I think she is the main character because the book is told from her perspective and you get to know her feelings and emotions. The book is completely about her; her love for Augustus, her fear of hurting people, her obsession with An Imperial Affliction, and especially her annoyance with everything.

5.2 I think the most important helper in this book is Augustus. He is the one who gives her her life back. He gives her something to get out of bed for, he shows her that living is still worth it, he shows her that there is more in life than just existing, he even helps her realize her dream to visit Peter van Houten.

5.4 I think Peter van Houten is the most interesting character in the book. Peter is the writer of An Imperial Affliction, Hazel’s favourite book. The first time you hear about Peter is when Augustus has sent him an email requesting the ending of the book and Peter replies. Hazel has sent Peter multiple emails and letters over the past few years but has never gotten a reply. After some emailing back and forth, Hazel and Augustus go to Amsterdam. During this trip you get to know Peter as a drunk who is incredibly rude and doesn’t answer any questions. As an answer to every question, Peter says something completely irrelevant. For example, on page 187 Hazel tries to ask him questions about the book but he keeps interrupting her and he tells about the philosopher Zeno. Halfway through his story, Peter suddenly stops and asks Hazel and Augustus how familiar they are with Swedish hip-hop, he then plays a Swedish hip-hop song and after that he leans back in his chair and says: “I assume that has answered all your questions.” (pg. 188). Hazel and Augustus continue to try to talk to him but it doesn’t help, they get no answers to their questions (with the exception to the question about what happens to the hamster after Anna dies). It is not until the end of the book that you hear again from Peter van Houten. In the end Peter shows up at Augustus’s funeral and you then find out that his book is based on reality and that he has lost his only daughter. A loss he has never been able to overcome. Because of this depression he has turned into the man he is now. In his later correspondence with Augustus, Peter promises Augustus that he would attend his funeral and tell Hazel what happened to Anna’s mother after Anna dies. Peter does as Augustus has asked; he goes to the funeral and talks to Hazel. But Hazel doesn’t want to talk to him. She says he is just a pathetic guy who tries to get attention by using fancy words. I think she was right. Until the ending of this scene, that was exactly what I thought about Peter van Houten. She leaves him alone and as she drives away, he holds up his drink to her and he has a sad look on his face. This is the moment that you see the real him, even though it is just for one moment. In the end, Peter van Houten is just a father mourning for his lost child, not being able to live on without her.

6.1 An example of a short ‘suspense curve’ in this book is when Augustus and Hazel try to sell Hazel’s swing-set. You wonder whether or not they will find someone who wants the swing-set. A page later you find out that Hazel has gotten multiple emails and that she decides to give the swing-set to a guy named Daniel Alvarez, who has three kids and wants them to go outside for once.

6.2 An example of a long ‘suspense curve’ in this book is when you hear Augustus yelling “BECAUSE IT IS MY LIFE, MOM. IT BELONGS TO ME.” (Page 139) before the trip to Amsterdam. You wonder why he is yelling this and you won’t find out until the end of the trip, when Augustus tells Hazel that he has had a cat-scan and that he has cancer everywhere in is body. Because of this, his mother didn’t want him to travel to Amsterdam because it meant that they would have to postpone the treatment for a few days.

6.3 One example of the manipulation techniques mentioned in Laagland is withholding information. This technique is used a lot throughout the book. This is because the story is told from Hazel’s perspective and Hazel doesn’t know everything. As long as Hazel doesn’t know, neither do you. This creates a lot of open spaces.

6.4 The moment in the story that is the most important, should maybe be the moment that Augustus dies, but I don’t think this is the most important. I think the most important moment is the moment that Hazel decides to get into the car with Augustus after he asks her to come over to watch V for vendetta. Even though Hazel knows nothing about him, she trusts him enough to get into his car. If she hadn’t gotten into his car at that moment, they probably would have never fallen in love with each other. If she had done anything differently, the whole story would have been different. This moment is practically the start of their relationship.

7.1 The general language in this book is not light, you will need to concentrate on what you’re reading. Take for example the first sentence: “Late in the winter of my seventeenth year, my mother decided I was depressed, presumably because I rarely left the house, spent quite a lot of time in bed, read the same book over and over, ate infrequently, and devoted quite a bit of my abundant free time to thinking about death.” (pg. 3). Some people will stop reading after a sentence like this, it is a long sentence and there are a few complicated words in the sentence. But once you get used to the long sentences and the word choice of the author, the language is great. Because of the long sentences the author can say so much without getting boring or repeating himself. So I love the way the book is written.

7.2 The dialogues in this book are very life-like, there are grammar mistakes, ehhs and other faults that people make when they speak. For example, on page 181: “They are-what? They-I thought they were in America!”. In this part Peter van Houten is overwhelmed by the presence of Hazel and Augustus. He is stumbling over his words. He could really have said it that way, it doesn´t sound scripted. 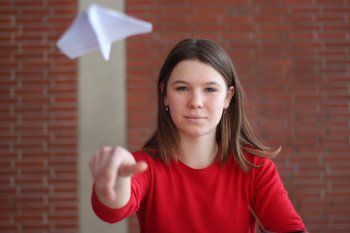 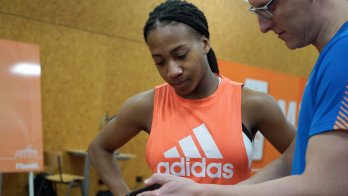 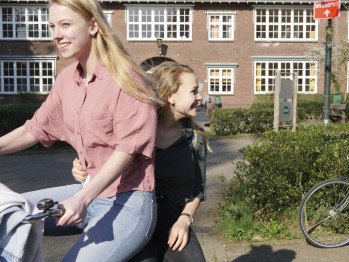