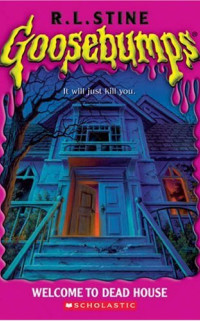 Amanda’s en Josh’s father heritated a house from his uncle which was situated in the city of Dark Falls. Amanda and Josh didn’t like to leave their home and their friends.
One week later and after 4 hours driving, they arrived at their new home. They didn’t like the new city and they found their new house very spooky.
Together with Mr. Dawes, they went to visit the house, but Josh insisted to stay outside.
Suddenly, from out of the car at the foot of the driveway, they heard Petey barking, howling and making a fuss. When Josh released Petey, he run towards Amanda and started to growl and to bark at Mr. Dawes.

After a while they went inside the house and left Josh and Petey behind. When Amanda went for a second time to her new room, she saw a boy standing in the doorway just for a second. With a shock she realized that it wasn’t Josh.
‘Hey’: she called and run to the hallway, looking both ways but the long hall was empty. She ran down the stairs and asked Mr. Dawes if the house was haunted. He answered that there was no ghost included.
Dad suggested that she went outside to tell Josh about the house. She called Josh, but her heart sank, Josh and Petey were gone.
They jumped all in the car and started to look after Josh and Petey. After a while they found Josh at the cemetery, running wildly though the tombstones. It looked like he was being chased. But he was chasing after Petey, who had run away, which he had never done before. They guessed that Petey was upset about the moving.
A few weeks later, the day of the moving, everyone was very nervous.
When they arrived at the house, Amanda saw a face in the left window above the porch. The same boy was up there staring down at her. She told her parents about it, but they wouldn’t believe her.
While their parents were unpacking the moving boxes, Josh, Amanda and Petey went to explore the neighbourhood. At the end of the street they met a boy, Ray, and together they went to the playground next to the school.
While they were playing softball, Amanda met a new girl, Karen.

After the game, they discovered that Petey was gone. So they went for a search, but they couldn’t find him.
That evening their parents had to go to a party. During that night Josh went to Amanda’s room and told her that he knew that Petey was at the cemetery. So they both went to the cemetery and when they were almost there, they saw Ray. He was trying to stop them at the entrance. Suddenly they saw Petey, they called him but he didn’t listen and ran away.
Josh shined with his flashlight on a tombstone and they saw the names of Ray, Karen and the other kids. They realized that they were all dead. Ray told them that they had all lived in the dead house and that they would die as well.
They were very scared and ran home to look for their parents but they were still at the party. Suddenly Karen stood in the room and tried to kill Amanda and Josh, but then Mr. Dawes appeared and took them with him. He told them that their parents were at the cemetery. When they arrived there, Josh saw Petey and ran to him. He felt over a tombstone and Amanda came to help him.
On that stone they saw the name of Mr. Dawes. So they knew that he was also dead.
Mr. Dawes came near by and he told them that once the town was normal. But due to an accident in the factory a yellow gas floated over the town and killed all the people. But they couldn’t rest and Dark Falls became a town of living dead.
Once more they asked about their parents and Mr. Dawes said that they were save and sound. Then Mr. Dawes tried to grab them but Josh hitted him with his flashlight so they could escape.
Whilst hiding for Mr. Dawes they saw several dark figures walking towards an amphitheatre.
They went as well to the amphitheatre and saw their parents. They looked uncomfortable, terrified and their arms tied tightly down at their sides.
To save their parents they decided to push over an old tree so the theatre would fill with beautiful, golden sunlight. After a few attempts the tree felt finally down and the living dead were caught in the sunlight. They started to disintegrate.
Josh and Amanda freed their parents and they all decided to move back to their old house.
When they left the dead house, a new family arrived and while they catched a glimpse of a dark figure, they sped away.

In het boekje staat deze zin echt niet, hoe heb je dit verzonnen?
Heb je een bron?
But due to an accident in the factory a yellow gas floated over the town and killed all the people. But they couldnâ€™t rest and Dark Falls became a town of living dead