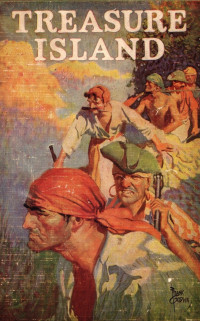 The plot
Jim Hawkins lives together with his father and mother in “The Admiral Benbow”, there also lives a man called Bill Bones; he’s an old seaman. Jim’s father is very ill. Every day Doctor Livesey is taking a look around. But when it is getting colder his father is getting worse and dies, shortly after he died, Bill also died because of an overdose of rum. As an inheritance Bill leaves a wooden chest with some money and a strange map of an island. Jim and his mother aren’t the only persons who know this and must escape for some seaman who wants to steal the map.
Jim goes to doctor Livesey; the doctor is interested in the map and they go to Mr. Trelawney in Bristol, he aranges a boat called the Hispaniola. They also need some seamen but they don’t know they are old men of Bones the man who died, the treasure was from him but he gave the map to Jim. John Silver was the captain of the boat. They leave in Bristol with the Hispaniola. When the boat is alsomost at treasure island Jim finds out that John Silver and his crew have a plan to steal the treasure. He tells this immediately to doctor Livesey and mister Trelawney.

When the are on the isle they give the crew a day off , John Silver starts to kill the people who don’t want to join him an his plan. Jim saw that John killed a seaman; he was so afraid that he ran as fast he could into the wood. Then he saw Benn Gunn he also was an old seaman of Bones he also knew that there was a treasure, because when he got there for the first time they didn’t find it. He went there another time but they also didn’t find it and the crew left him on the island. In the thirth year on the isle he found the treasure and hid in a cave. Benn helped Jim only if he may get back to England. They said to John that they have found the treasure and they left. When they make a stop John escapes with a little part of the treasure the rest of it is split between Jim, Dr. Livesy, Trelawney and Benn gunn.

The climax
I think that the climax of the story is when John Silver kills the person and Jim escapes into the wood and mets Benn Gunn,is the most exciting part.

Meaning of title
The title corrosponds very well with the storyline because they are looking for a treasure on a island.

Theme of the book
The theme is pirates/adventure because a normal guy and a few seaman (pirates) are looking for a treasure and there is a lot of adventure on the island.


What is the setting of the book
The story first takes place in the harbor of Bristol in the “Admiral Benbow”. After Bill Bones was killed it takes place in another part of Bristol at doctor Livesey. Then the story takes place on sea where they’re heading to Treasure Island where the next part takes place. At the end, the story plays again in Bristol. It all happened around the year 1700.

What type of work is it
It’s an adventurous book because the main characters go places. It is a book with a lot of characters and a large group.

Personal experience
The part I remember the best is when John Silver kills a seaman and Jim runs for his live into the woods. I compare Jim the most with myself because he’s also young and adventurous. I don’t know a part of the story that looks like an event in my own life.

Personal opinion
I like the book but it was pretty difficult, because there are a lot of characters who have been introduced shortly after each other.