The Wave is sweeping through the entire school. What started as an experiment in Ben Ross's history class is taking on a mind of its own. Students who thought they were free individuals have become dominated by The Wave, and its salutes and slogans-Strength Through Discipline, Strength Through Community, Strength Through Action-are everywhere. Only Laurie and a fe…

The Wave is sweeping through the entire school. What started as an experiment in Ben Ross's history class is taking on a mind of its own. Students who thought they were free in…

The Wave is sweeping through the entire school. What started as an experiment in Ben Ross's history class is taking on a mind of its own. Students who thought they were free individuals have become dominated by The Wave, and its salutes and slogans-Strength Through Discipline, Strength Through Community, Strength Through Action-are everywhere. Only Laurie and a few of her friends recognise the danger in The Wave-but can they stop it before it goes too far?

Based on a true incident in a high school in California, this chilling story shows how easily people can be swayed by the powerful forces of group pressure. 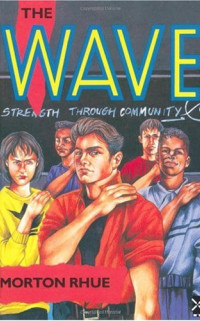 Laurie Saunders is a very popular girl at Gordon High. She is editor-in-chief of the Grapevine. She and her boyfriend David Collins have history class together from Mr Ben Ross. After watching a film about world war 2 the class asks Mr. Ross following questions: Could a whole nation be so enthralled by their leader they become blind to across atrocities? Is it possible that 6 million Jews were exterminated in Nazi Germany without the majority of Germany people knowing about it? Now that we know what happened to the Jews in Germany, could a similar incident even be allowed to happen again? Ben Ross don’t really know the answers so to help them explore the answers Ben sets up a new system in his classroom. They have to sit straight up in their chair en when Mr. Ross ask them a question, they have to stand up next to their chair and start the answer with: Mr. Ross... they also have a salute and a chant. There slogan is: Strength Trough Discipline, Strength Trough Community, Strength Trough Action. They call themselves “the wave”. To his surprise his pupils respond to his system with enthusiasm and within only a few days the chants and salutes of the wave sweep through the school and everyone wants to be a member of the wave. David and Brian believe it is just what the Football team needs. But it doesn’t just stay with the history class and the Footballteam. Kids from other classes join The Wave and the even skip their own class to go to the Ben’s class. They say that everyone is equal, but only is your a member of the wave. But then some kids are even starting to use violence to get the other kids to join The Wave. David starts to believe in the Wave more and more and some day he even breaks up with Laurie, because she doesn’t want to join the Wave. Ben knows it is getting out of control, but he can’t stop it, not yet. He still thinks it’s “just an experiment” and he can stop it whenever he wants. It’s even that far that Robert Billings, who used to be the classnerd, wants to be Ben’s bodyguard, because he wants to protect him. He admires Ben because thanks to him, Robert isn’t a nerd anymore, and is equal to the other kids now. Laurie tries to convince her best friend Amy Smith that she shouldn’t join the Wave. But Amy believes in the Wave, just like all the other kids. One day, Ben and David are sitting in Brian’s car. They are waiting for Laurie to go home. It is already late because Laurie has been working on the Grapevine. When they see her, David gets out the car. He wants her to stop writing about The Wave. When Laurie doesn’t want to do that, David overcomes with anger. He throws her down on the grass. Suddenly he realizes what he is doing and what the Wave has done to him. Together they are going to Ben that evening. They want to make him clear that The Wave has gone too far. Ben already realized that, and he already wanted to stop it. The next day he organises a Wave rally. He tells the Wave members that they have to come because the national leader of The Wave will appear on cable television to announce the formation of National Wave Youth Movement. David and Laurie are getting angry. This was not what Ben had promised them. Ben tells them to go to principal Owen’s room, because the have interrupted the class. That afternoon, Ben shows the Wave members the same movie he has showed the history class. The are all shocked and find out what the truth is. That The Wave is not good. They have learned a very good lesson. But it will never be the same again, after what happened.