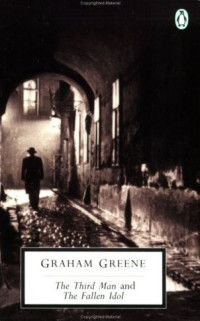 Rollo Martins was a writer of cheap westerns.
He was 35 years old when his best friend Harry Lime was dead
Mr. Lime was hidden by a car when he crossed the road to met his friend Mr Cooler at the other side of the street.
On his funeral he saw a man , named Calloway .This man was a police officer.

He was with him when he died.

In his investigation Mr Martins met Mr Koch.. That was the man who had seen the accident. His details about the accident were not the same as those of his other friends.
He had seen three men who took Mr Lime into a house but he could not describe the third man. Now Mr Martins no longer doubted that murder has been done.
He visited Mr Koch and saw that the police was at his flat. He saw that Mr. Koch has been murdered.
Mr. Martin discovered also that Mr Kurz and his friend where in a racket of stolen penicillin in the military hospitals. The penicillin was diluted with colored water and so many men and children lost their lifes.

Now it became clear that Dr. Winckler and Mr Kurz lied about the dead of his friend.
Mr Kurz makes an appointment with Harry Lime and Mr. Martin.
They met each other at the big wheel in Vienna.
There Mr Lime explained that it was better for him that he hides himself in the sewers.
So he could hold the money he earned with racketing penicillin.
After a time Mr Lime went back to the sewers and Mr. Martins and the police followed him. Mr Lime had a gun and shoot a policeman. Now Mr Martin was in front of his friend and shoot him dead.
Mr Lime was buried for the second time and Mr Martins went to his second funeral.