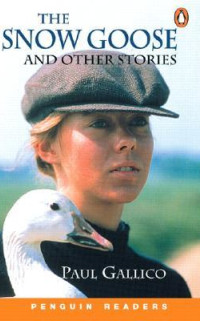 Meld je aan!
In the late spring of 1930 Philip came to the abandoned lighthouse. He lived there alone. He was a painter and he loved birds and the nature.
One November afternoon, three years after Philip had come to the great Marsh, a child, Firth, came to Philip. She had find an injured goose and she said: Can you heal it, sir? Yes, yes, said Philip, we will try. They called the snow goose, the Lost Princess. When the snow goose was at the lighthouse, then came Frith. But the goose returned to its summer home and Frith didn’t come to the lighthouse. Philip was heartbroken.
In mid-October the miracle occurred. The snow goose had returned. Philip sent a message to Frith and three days later she was there. They had a great time together. Since then the goose came every year and when the snow goose was there was Frith there too. In the summer of 1940 the snow goose returned and she brought many geese with her. They realized that the Lost Princess was lost no more. This was her home now.

But the world was on fire. Philip went to Dunkirk. Frith want go with him, but Philip must go alone to save soldiers. Frith took care of the geese. The Lost Princess went with him and flew above the boat. He sent the snow goose back. Frith saw the snow goose and she thought Philip was dead. But one day Phillip came back with another boat and a new friend. Frith was very glad to see him. But the German plane blew up the lighthouse and for this reason Frith took Phillip and the friend in. Philip told her his story. First he saved soldiers with his boat, but they bombed his boat. Then he took care of wounded soldiers and met his friend, Assisi. Assisi lay in the hospital where Philip helped. They became friends. When the war was over, they got a boat. Frith told that she got married in the church and she had a baby. The baby called, John, he was three months old. Also took she care of the geese.
But they couldn’t stay by Frith because Frith was busy with the baby and her house was a bit little for five people. Philip and Assisi restored the lighthouse and they moved in the rebuilt lighthouse. And they took care of the geese. Philip became John’s godparent. So was Philip never more alone. All’s well that ends well.