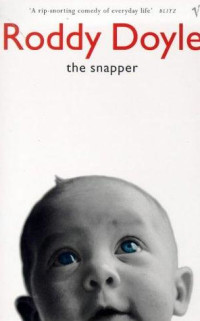 3. Publisher and year of publication
Wotlers-Noordhoff 1990

5. Number of points you get for this book
6 points

7. Explanation of book title
In the book they call the baby snapper. That means, that the baby don’t have a father, only a young mother.

8. Place where story is set
Ireland, the story takes place in Barrytown (barry means happy in Irish). The town is suburb of Dublin and isn't very big.

9. Construction of story
The book consists of short chapters that is distincted with 3 stars

11. Open or closed end?
Closed end, because in the end the baby was finally born.

13. Describe the principal character(s)
Sharon: 20 years old young woman, she lives with her parents. She became pregnant of George Burgess when she was drunk. After 9 months she got a daughter called Georgina.
Jimmy Sr.: Sharon’s father. He Wants to know whos the father of Sharons child. Later he reads books about pregnancy and then he knows more than Sharon.
Veronica:Sharon’s mother. She don’t realy care about Sharon’s pregnancy. She is more busy with making dresses for Linda and Tracy.

Jimmy Jr.:Sharon’s brother. He wants to become a DJ and take lessons to practice his pronunciasion.
George Burgess: The father of Sharon’s baby. He leaved Sharon while she was pregnant and Sharon was the only one who knew where he was.

14. Your opinion on principal characters
I think Sharon is a responsible girl because she kept the baby.
I like Sharon’s father like he was later. When he read books about pregnancy. I don’t like her mother because she don’t really care about Sharon. And George Burgess, I hate him!! He just leaved Sharon, he said I’ll take care of you and the baby but he wasn’t like he have to be.

15. Your opinion on the book as a whole
I liked the book ‘’the snapper’’ very much. At the beginning it was difficult to read but later it became easier. The subject was really interesting because getting pregnant at a young age is something of the daily life.

16. State what you have learnt from the book
I learned something about the way how people in suburbs, like the one in this story, live.