The silence of the lambs door Thomas Harris 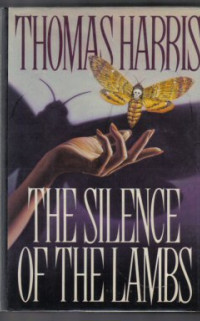 The story
The story is about Clarice Starling, an FBI-agent in training. One day her trainer tells her to report to the Behavioural Science department. There waits the chief of the department, Jack Crawford, for her. The department is doing an investigation on ‘Buffalo Bill’, a serial killer how kills young woman and fleeces them before he dumps there body’s. The Behavioural Science department is working a profilsketch of ‘Buffalo Bill’ and they want Starling to help them with that. Therefore she most go talk with Dr. Hannibal Lector, a serial killer that is now in detention. Dr. Lector is a former psychologist how killed people and ate them. He is also very intelligent. The Behavioural Science department thinks that ‘Buffalo Bill’ has been a patient of Dr. Lector.
When Starling arrives at the mental institution where they keep Dr. Lector, they inform her off the rules their are for visiting him. He can still be very dangerous if he gets the change. The first meeting with Starling and Dr. Lector didn’t go very well, but at the second meeting Dr. Lector gets respect for Starling and agrees to help her. For the information he gives about ‘Buffalo Bill’, Starling tells him something about her personal live. Besides the visits to Dr. Lector, Starling also went to the autopsy of one of ‘Buffalo Bill’ his victims. In the throat of the woman there was found a cocoon of an insect. It appeared to be a cocoon of a death’s head moth.

Then the daughter of one of the senators is being kidnapped. The FBI knows almost certain that ‘Buffalo Bill’ has kidnapped her. The senator makes Dr. Lector an offer, behind Starlings back. If he tells her the real name of ‘Buffalo Bill’ he will get a much better cell. Dr. Lector agrees, but on the transfer to his new cell he escapes.
Meanwhile Starling is in the house of ‘Buffalo Bill’, without knowing it. But she discovers it very quickly when she sees a death’s head moth in a bottle. His real name is James Gumb. She kills him by shooting him right before he shoots her. She finds the daughter of the senator and takes her to the FBI. Starling gets promoted and becomes an official FBI-agent.

Characters
There are three main characters. First there is Clarice Starling. She is a young woman, with a strong character. She is attractive, but does not like man how obviously notis that. She has a south-American accent, witch she doesn’t like. She is a perfectionist; she wants her carrier to be perfect. She tells what she thinks and is not easy frightened. That is why Dr. Lector begins to like her so much.
Than there is Dr. Hannibal Lector. He is the most complicated character of the story. At the end of the story, you still don’t know exactly how his brain works and you have the feeling you never will know. He is a man in his fifties and has a good sense of taste. He loves culture and classic music and is very strict in his manners. He can be a real gentleman, witch makes it sometimes hard to believe that he is a cold blooded murderer, how eats people. He is also very intelligent.
At last there is ‘Buffalo Bill’, later known as James Gumb. He has a real sick mind. He wants to be a woman, a pretty one with big, soft breasts. In stat of just going to the plastic surgeon, he kills young woman and fleeces them to make coat of their skin. He has a poodle, witch he adores. He has many famine sides, but has no soft character at all.


Time
The story plays in 1988, the year that the first edition came out. The time plays a big role in the story. Back in 1988 there was no such thing as DNA technology. If there was, the story would end much sooner, because then would know how the killer was with the first victim.

Place
The story plays in America, but it could also have been an other country with the same good economic conditions.

Structure
The story is told from two different views. One view is that of Clarice Starling, this is the view that is used the most. Than there is the view of ‘Buffalo Bill’. In this view you very well get to know the motives of a psychopath. This view is one of the reasons why this book is so good. The story has a good beginning and good end. The end is open, because Dr. Lector, one of the most dangerous serial killers of all, escapes and disappears.

Title
The title doesn’t make anything clear about the contents of the book. After reading the book, you know that it goes about something that Clarice Starling experiments in her youth. See lived on a farm where lambs were slaughtered.

Dedication and motto
Dedication:
To the memory of my father

Motto: If after the manner of men I have fought
with beasts at Ephesus, what advantageth it me, if the dead rise not?
-1 Corinthians
Need I look upon a death’s head in a
ring, that have one in my face?
- John Donne, ‘Devotions’

The first line of the motto tells that finding a killer doesn’t bring their victims back alive.

Opion
I found it a very good story. It goes deep, and I love that in a book. I find the character of Dr. Lector very fascinating, because it is so complex and he is so intelligent. There is always something about him that surprises you. Clarice Starling gives the action to the story. Because she finds out so much, she makes the story move. I love the theme of the book, psychology and a detective in one. It is something that interests me. I had already red the Dutch version of the book, witch made it a lot easier to read it in English. I still found it a difficult book, because of the many psychological terms that are used. But I found it really worth it to read it and I would recommend it to anyone that also likes the them.