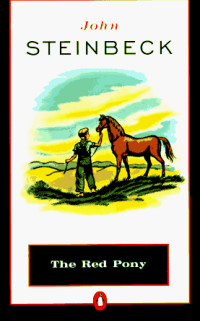 Meld je aan!
1. Explanation of the title
The title of the book is going about the red pony Gabilan. Jody has got him from his father and Billy Buck. I think the title isn’t good, because chapter two and chapter three aren’t going about Gabilan, because he died in chapter one.

2. The author
John Steinbeck:
John Ernst Steinbeck was born in Salinas, California, on February 27, 1902 of German and Irish ancestry. His father, John Steinbeck, Sr., served as the County Treasurer while his mother, Olive (Hamilton) Steinbeck, a former school teacher, fostered Steinbeck's love of reading and the written word. During summers he worked as a hired hand on nearby ranches, nourishing his impression of the California countryside and its people. After graduating from Salinas High School in 1919, Steinbeck attended Stanford University. Originally an English major, he pursued a program of independent study and his attendance was sporadic. During this time he worked periodically at various jobs and left Stanford permanently in 1925 to pursue his writing career in New York. However, he was unsuccessful in getting any of his writing published and finally returned to California.
I have used: http://www.steinbeck.org/Bio.html


3. The summary
Chapter 1 – the gift:
Jody lived on the farm of his father. He must often help on the farm, there for have his father and Billy Buck (he worked on the farm) a surprise for Jody. He gets a pony. He calls the pony Gabilan. The pony is red and has a grey nose. Billy Buck explains Jody how he must look after the pony. And how he must ride on the pony. Jody learned fast and as he this way continues. He can ride the pony with thanksgiving. But then become Gabilan sick. On a rainy day, Billy Buck makes a mistake. He doesn’t take the pony inside so the pony stands a whole day out in the rain. Billy Buck promise to Jody that he can makes him better. Gabilan is fighting for his live, but after a few days he died. Jody is very sad and mad on Billy Buck.

Chapter 2 – the great mountains
On a day an old man names Gitano comes to the farm. He wants to stay there because he said that he was born at the farm. Mr. Tiflin tells him that he can’t stay because there is no work for him and he can’t pay it to let Gitano stay. Gitano doesn’t want to leave and there for said Carl Tiflin that he can stay for one night in the old house.
The next morning, Gitano is gone. He went to the mountains with an old horse. He lets his backpack lie on the farm.

Chapter 3 – the promise
Because Jody has good care of his first pony Gabilan. He will get another pony. Jody has to work the complete summer for it. One of Carl’s Tiflins mares is pregnant and Jody will get the colt. When the mare is ready for the delivery to come them that the colt is not in the right position. The colt is turned and to save the colt Billy has to kill the mare. Jody is very happy with his new pony.

5. The description of the main characters
Jody: Jody is ten years old and lives on his father’s farm. He helps often on the farm with to food the animals and look after them. Jody is very shy.
Billy Buck: He helps Carl Tiflin with the farm. He is very helpful and nice.
Carl Tiflin: He is Jody’s father and run the farm. He is very strict.
Mrs. Tiflin: She is the mother of Jody. She is a house wife and careful.
Gitano: He is an old man. He is been closed and mysterious.
Gabilan: The first pony of Jody.

6. The page number were the characters are described
Jody: page 2 – He was only a little boy, ten years old, with hair dusty yellow grass and with shy polite grey eyes etc.
Billy Buck: page 1 – He was a broad, bandy legged little man with a walrus moustache etc.
Carl Tiflin: over Carl his looks become nothing said.
Mrs. Tiflin: over Mrs. Tiflin her looks become nothing said.
Gitano: page 48 – He was old only because his heels struck the ground with hard jerks etc.
Gabilan: page 10 – a red pony was looking at him out of the stall etc.